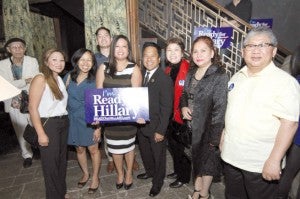 LOS ANGELES – Asian American community and political leaders in LA County, including Filipino-Americans, gathered in Downtown LA’s Chinatown on Thursday, March 19 to show support for former Secretary of State Hillary Clinton if she chooses to run for president in 2016.

“We want to send a very loud and clear message to Hillary that we are here and we are ready for her and that the AAPI community is fully behind Hillary when she announces her candidacy,” Ed Chau, State Assembly member of the 49th district, told an enthusiastic crowd packed inside General Lee’s in Chinatown.

The rally-like event, with supporters cheering and applauding with conviction the possible presidential candidate, was among more than 1,000 grassroots organizing and fundraising events held across America supporting the Ready For Hillary Political Action Committee (PAC).

Clinton supporters in the AAPI community have touted her as the frontrunner for the Democratic presidential nomination, as someone “who will fight for the middle class, pay equity and education for all.”

“We need Hillary Clinton in the White House,” said Rep. Judy Chu, chair of the Congressional Asian Pacific American Caucus. “But how are we going to make this happen? We can only make it happen if the grassroots is activated, if the grassroots works hard in every sphere, in every corner of the United States.”

Chu, the first Chinese American elected to Congress, told the crowd on Thursday that the AAPI community, which is the fastest growing population in the country, can make and has already made a critical difference in battleground states.

From marginal to margin of victory

She referred to the case of Rep. Gerry Connolly (Dem-Virginia), who was re-elected in 2010 with an advantage of about 900 votes. Chu said Connolly attributed his victory to the API population.

“Asian Americans have gone from being marginalized to being the margin of victory,” she said.

A National Election Pool survey found that in the 2012 election, 73 percent of AAPIs cast their vote for the re-election of President Barack Obama.

“I’m pretty sure we’re going to replicate that [type of voting] for Hillary,” said Melissa Ramoso, state chair of the Filipino American Democratic Caucus, adding that progressive Democratic Filipinos are pushing hard to help Clinton and hoping she will run. “Our goal is for her to be supported by both [Asian Americans and Pacific Islanders].”

While attendees at Thursday’s event expressed only support for Clinton, who many said is someone who can address the community’s needs, Republicans view their own party as one that will do better for AAPIs.

“As the Democrats continue to take our community for granted, Republicans continue to be a more inclusive party that AAPIs will support because of pro-job, pro-growth policies that restore the American Dream.”

Some polls have shown that Democratic support for Clinton has declined with the revelation this month that she used a personal email account during her tenure as Secretary of State. Support for her candidacy has fallen about 15 percentage points among Democrats since mid-February, according to a Reuters/Ipsos tracking poll. The survey also showed that 46 percent of Democratic respondents said they favor an independent review of her personal email use.

A national telephone survey conducted by Rasmussen Reports indicated that 54 percent of likely US voters believe Democrats should find a fresh face to run for president in 2016 instead of promoting someone who has previously run.

Yet according to a CNN/ORC poll, Clinton maintains the lead among potential Democratic challengers she could meet in a nomination contest.

Republicans have condemned Clinton for her use of a personal email account for transparency and security reasons.

But the issue was not discussed by speakers at the AAPI reception for Clinton in Downtown LA. Some attendees on Thursday, after speeches were made, said the email issue was not one that bothered them.

Ready For Hillary has a network of more than 135,000 donors. Of contributions the PAC has received, 98 percent are $100 or less and more than 55,000 are worth exactly $20.16 (representative of the year she would run for president).

More than 3.6 million people across the country have pledged their support for Clinton, including Artesia Mayor Pro Tem Victor Manalo, who thinks her victory will be beneficial for all ethnic communities, including Filipinos.

“I think we need to realize that in many instances, we all want the same things. We all want good educations, good jobs, and we want to be a part of the economic, social, political system in this country, Manalo said.

“And I think having Hillary as president, having a woman a president will give government a point of view that people need to be included and not be excluded and will help in seeing where the inequities are in our society,” he added. “So we, as Filipinos, will benefit from that.”