How a Filipino couple made life easier in an Oklahoma town 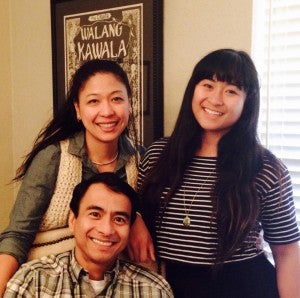 GUYMON, Oklahoma — A dervish swirl of dust and leaves blankets the Oklahoma panhandle town of Guymon at dusk, when Emmanuel Barias arrives home, in a white coat, from another busy day at the clinic.

As a member of a Filipino-run medical team, Doc Manny—as he is fondly called by many in the community—sees at least 60 patients every day.

Soon after, Susan drives in, too, and a chorus of yaps and whines ensues when their three dogs welcome her with wagging tails and lolling tongues. She is back from managing their various business enterprises. It is time to have wine, a vegetarian dinner and conversation together.

Over their shared meal, they receive a call from their only daughter away at Barnard College in New York City. Cai is checking in on her folks because she has “nothing else to do,” but her voice is warm, and the laughs are quick and easy.

She asks about the puppies, so her mom gives her some face time with Oliver, Peanut and Sherlock. At some point, another phone rings—the hospital, consulting about a patient’s care. Manny retreats to a corner to discuss the case.

Just another day in the life of a couple whose relationship began 25 years ago at the University of the Philippines, Diliman, where Susan (née Morales) finished her undergraduate degree in economics in 1992 and master’s degree (in the same field) in 1997.

Manny, on the other hand, completed his pre-med science course in 1990 and his MD studies in 1995. In spite of the disparity in personal timelines, they made their relationship work. 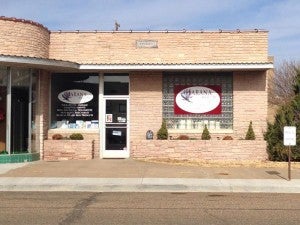 Today, Susan and Manny are well-respected residents in Guymon, known as much for their happy banter with friends and each other as they are for their astute business sense.

Dinner conversation is as much about end-month reports to file as about gifts they ought to give each other for the next special occasion in the calendar.

According to Jada Breeden, executive director of the Guymon Chamber of Commerce, Manny and Susan “have made Guymon a better place by their caring nature. Dr. Barias is a caregiver as his livelihood, but he has gone above and beyond with his [and Susan’s] commitment to the overall wellbeing of the people in our [town]. Together, they have opened businesses that bring high-quality goods and services to benefit patrons. [We are] blessed to have the Barias family call Guymon home!”

It all began in 2008, when Manny took up his current post as a specialist in family medicine at the Specialty Clinics of St. Anne, owned and run by a Filipino Phi Kappa Mu (the UP College of Medicine fraternity he belongs to) brother. 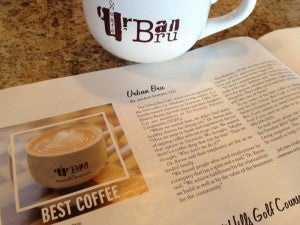 Urban Bru has perfected the art of the perfect coffee brew, as judged by Oklahoma Living, a lifestyle magazine of the state. FACEBOOK PHOTO

As they set down roots in Guymon, they looked around for opportunities beyond Manny’s medical practice. Shortly thereafter, Susan became an active member of the local YMCA and a few other community organizations and groups, but her real passion came to the fore in the form of Urban Bru, which received the award for Best Coffee in Oklahoma in January 2015, from Oklahoma Living, a glossy lifestyle magazine in the state.

The idea of a café came easy: There was none in Guymon that fulfilled the need for great coffee, pastries, sandwiches, wraps and salads. Being coffee drinkers themselves with a deep desire for wonderful and healthy food, Susan and Manny wanted to establish one even they themselves would patronize.

What did not come easy was putting together the business plan that would make the dream a reality. Still, Susan kept at it and opened Urban Bru (www.urbanbrucafe.com) to rave reviews. To date, the café continues to enjoy four-plus stars on Yelp, Trip Advisor, Urban Spoon and other similar review sites. Clearly, they have touched upon sage wisdom in starting such an enterprise: Meet a need and “they” will come.

Urban Bru has also received official certification as a healthy business from the Oklahoma State Department of Health, which reinforces their reputation as employers mindful of their staff’s welfare.

People do indeed come not only to enjoy their all-fresh menu at the Bru, but also to support their two other major businesses: the Panhandle Sleep Disorders Center and the Harana Medspa (www.haranamedspa.com).

As young as the two other businesses are (started 2014 and 2013 respectively), they are also recipients of certifications and recognitions in their own fields. In November 2014, the sleep clinic received its accreditation from the Joint Commission: Accreditation, Health Care, Certification, as a healthcare provider.

On the other hand, Harana was voted Best New Business by Guymon Daily Herald readers in 2014. In all three ventures, foremost in Manny’s and Susan’s minds was the question, “What can we do to serve the community?” 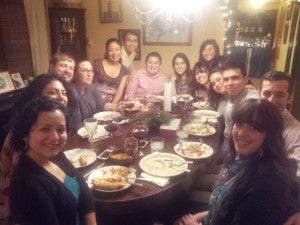 Barias Urban Bru Christmas 2014: Not an unhappy soul in the Bru crew, the team responsible for making the best coffee in Oklahoma. PHOTO BY AGATHA VERDADERO

Says Melyn Johnson, director of Main Street Guymon, an association of business establishments along and just off the town’s central thoroughfare: “Manny and Susan are the type who see a need in the community and address it. They don’t talk about it and hope someone else will pick it up. They do it [themselves]. Their caring and giving attitude has made them precious to us. I believe they were accepted into this western Oklahoma town faster than anyone I’ve ever seen. They are just good people.”

February marked the birthday of Susan and the fourth anniversary of Urban Bru. While the couple spent time in the Philippines with their families and friends, the café (and their other businesses) carried on without them. As the special day marched on, crewmembers started posting their greetings on Facebook, along with memorable, fun-filled photos of Susan and themselves.

Liz McCulloch, manager of the Bru, summed up everybody’s sentiments when she wrote, “May your day be filled with happiness that lasts you years. [May you realize, one day, just] how many lives you positively changed by opening [the] doors of Urban Bru. You and Manny created four years of smiles and you both made it possible [for us] to look back on amazing memories that will last a lifetime. Today will always be one of my favorite days.”

The rest of their posts are punctuated constantly by humor and joshing. Clearly, the Bariases are not just bosses. They are respected and admired leaders. They model lives the young people are watching and aspiring for. They are in community with them.

To read more stories on the Filipino diaspora go to PositivelyFilipino.com