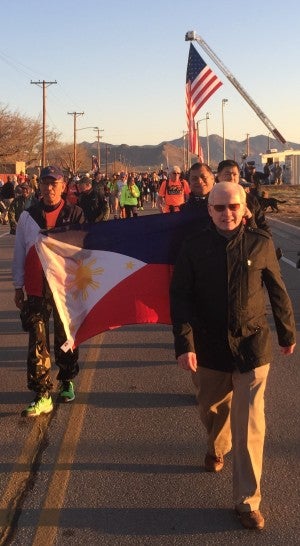 ALAMOGORDO, New Mexico — Thousands of marchers from all over the United States and even the Philippines on Sunday, March 22 paid tribute to Filipino and American World War II veterans by taking part in the reenactment of the infamous Bataan Death March.

More than 6,000 marchers, including Ambassador Jose L. Cuisia, Jr., joined surviving Filipino and American veterans at the 26th Bataan Memorial Death March staged every year at the White Sands Missile Range near here in honor of the so-called “Battling Bastards of Bataan.”

“Being here with you on the year that we commemorate the 70th anniversary of the liberation of the Philippines, is the least I can do to pay tribute to the Filipino and American soldiers who gallantly fought together in Bataan during the Second World War,” Cuisia said in his early morning address to participants.

Considered to be the largest commemoration of the Bataan Death March outside the Philippines, the annual 26-mile march at White Sands has drawn more than 72,000 people since it was started by Army ROTC Department of the New Mexico State University in 1989.

The event is in remembrance of the more than 75,000 Filipino and American soldiers who were force-marched 65 miles by Japanese troops following the surrender of Bataan on 9 April 1942. It’s a way of saying their sacrifice will not be forgotten. 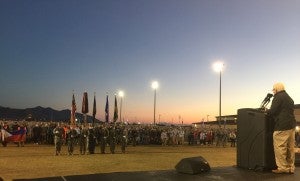 As many as 10,000 men—9,000 Filipinos and 1,000 Americans—perished in the march while many more died at the concentration camps in Capas and Cabanatuan and in the sinking of prisoner of war ships that were transferring them to Japan and Manchuria.

“The Bataan Memorial Death March began and will continue to provide a way to honor those who perished and those who lived through a horrific chapter of World War II,” said Brig. Gen. Timothy Coffin, commander of the White Sands Missile Range, which hosts the event.

“The legacy of the march keeps its history alive and insures the sacrifices made and lessons learned are not forgotten,” General Coffin said before asking Cuisia to address participants. 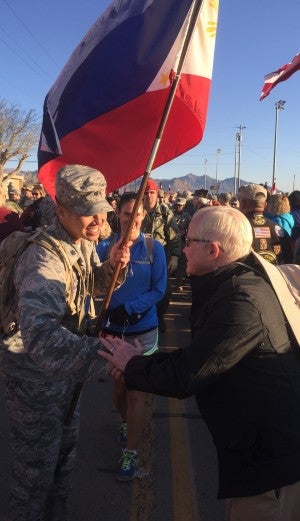 In his remarks, Cuisia paid special tribute to the surviving members of the New Mexico National Guard who were among the more than 1,800 troops who were deployed to the Philippine as part of the 200th and 515th Coast Artillery Regiments before the outbreak of the war.

“Many, especially in the Philippines, are not aware that New Mexico played a crucial role in the defense of my country during the last war,” Cuisia said. “Not many are aware that when Japanese bombers made their first attack in Luzon on 8 December 1941, it was the 200th Coast Artillery Regiment from New Mexico that fired the first shot in defense of the Philippines.”

Cuisia told the marchers, who included active-duty service members from the various branches of the US armed forces, that members of the 200th and the 515th Coast Artillery also fought gallantly in Bataan until the order to surrender was given. They were also among those who were forced to take part in the Death March.

“Only a few know that of the 1,816 soldiers that made up the 200th and 515th Coast Artillery Regiment, more than half gave their lives during the war,” he said, adding that New Mexico lost more men in the Philippines compared with any other state in the US.

“Today, we not only honor the men and women who helped defend my country during the Second World War. We also pay tribute to those who came after them who until this very day form the core of the alliance between the Philippines and the United States,” Cuisia said.

He said the strong bilateral ties between the two countries were evident in the humanitarian assistance provided by the US in the aftermath of Typhoon Haiyan in 2013. “The US military provided a much needed lifeline for the hundreds of thousands of Filipinos who were displaced by what is considered to be the most powerful storm to make landfall,” he said.

Further proof of the strong, enduring ties between our countries, according to the ambassador is the Enhanced Defense Cooperation Agreement that was signed almost a year ago.

“The Agreement aims to promote peace and security not only by helping the Armed Forces of the Philippines upgrade its capabilities but also to allow the US military to respond more quickly and effectively to environmental and humanitarian disasters in the region,” he said.

Cuisia later took part in the march accompanied by his wife Ma. Victoria and Minister Elmer Cato, Maj. Gen. Delfin Lorenzana and Chief Supt. Jose Gentiles of the Philippine Embassy and members of the Filipino-American community in Washington, D.C. led by former US Consul General Sonny Busa of the Philippine-American Foundation for Charities.