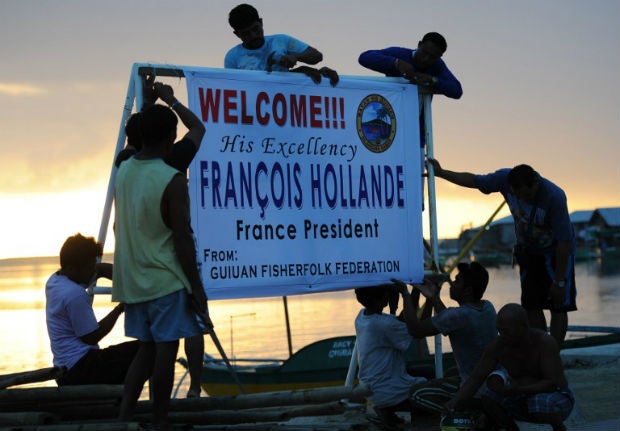 Residents install a banner to welcome French President Francois Hollande in Guiuan town, central Philippines on February 26, 2015, a day before Hollande arrives for a visit. Hollande called on February 26 for a climate change “alliance” with the Philippines that could spur similar co-operation between rich and poor nations at a crucial UN summit. AFP

Guiuan, Philippines–French President Francois Hollande on Friday visited a remote Philippine town devastated by one of the world’s strongest typhoons, seeking to sound a global alarm on climate change ahead of a crucial UN summit.

Hollande is on a two-day trip to the Southeast Asian archipelago, regarded as a frontline state in the struggle against global warming, as part of his campaign to build diplomatic momentum ahead of the Paris summit in December.

On Thursday, he launched an appeal with Philippine President Benigno Aquino III in Manila for world leaders meeting in Paris to secure a “universal, equitable and ambitious climate deal” that would avert catastrophic global warming.

Their appeal offered a show of unity they said could serve as a model for rich and poor nations, whose divisions led to a similar effort at a UN summit in Copenhagen in 2009 ending in disarray.

“We have a duty to act together and that’s why I came here to the Philippines, to launch an appeal, to seal an alliance,” Hollande said on Thursday. 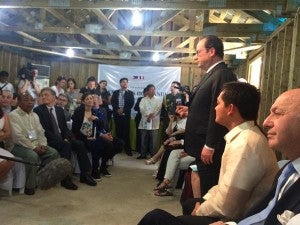 Hollande then flew to Guiuan, a small coastal town in the far eastern Philippines of about 50,000 people that is still trying to recover from Supertyphoon Yolanda (international name: Haiyan) 15 months ago.

Guiuan was among the first towns hit when Super Typhoon Haiyan roared in off the Pacific Ocean with winds of 315 kilometres (195 miles) an hour, the strongest gales ever recorded on land.

Haiyan then swept across already deeply impoverished farming and fishing communities of the central Philippines, claiming more than 7,350 lives.

Rebuilding those communities is expected to take many years and cost billions of dollars.

In the meantime, hundreds of thousands of typhoon survivors will continue to live in danger zones along the coast and remain extremely vulnerable to future storms.

The Philippines endures about 20 major storms or typhoons every year but scientists say they are getting stronger and more unpredictable because of climate change.

In their joint appeal on Thursday, Hollande and Aquino highlighted that people in the Philippines had “endured an unprecedented series of extreme weather events in the last few years”.

“We are reminded that while the developing countries have contributed least to climate change, they are the ones that suffer the most from climate change impacts,” the appeal stated.

In Guiuan, Hollande is expected to announce 1.5 million euros ($1.7 million) in aid for the French non-government organization ACTED to help local storm-vulnerable communities.

On Thursday, he pledged loans of 50 million euros ($56 million) to help prevent future weather-related disasters in the Philippines.

After meeting Hollande on Thursday, Aquino praised France’s leadership in the global warming fight, emphasizing that its emissions of greenhouse gases blamed for global warming were among the lowest of any developed nation.

“We, as a developing country, welcome that countries like France have emerged as global partners,” Aquino said.

The goal of the planned Paris pact, which must enter into force by 2020, is to limit warming to two degrees Celsius (3.6 degrees Fahrenheit) over pre-Industrial Revolution levels.

Scientists warn that on current trends, Earth is on track for double that or more — a recipe for catastrophic droughts, fiercer storms like Haiyan and other extreme weather events.

Hollande, the first French head of state to visit the Philippines, brought a high-profile delegation with him, including Oscar winner Marion Cotillard, who has been a long-time environmental campaigner.

‘It’s our duty to save Earth’

Hollande to Aquino: We need your voice