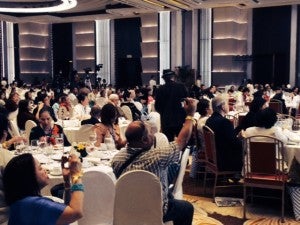 Filipinos based in more than 30 countries gathered at the Manila Hotel for their 3rd global summit. INQUIRER.net PHOTO 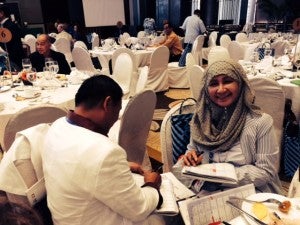 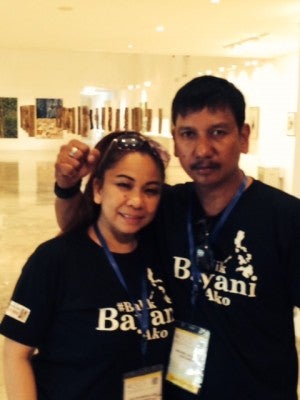 Roger and Bing Castaneda, hotel musicians in Hainan, China, are among the nearly 600 delegates at the summit. INQUIRER.net PHOTO

MANILA – “We like coming because we love meeting other overseas kababayan and getting ideas from everyone,” exulted Roger Castaneda, who along with his wife, Bing, is a hotel musician in Sanya, Hainan, China.

The Castanedas are among the 600 or so Filipino expatriates from 30 countries who convened at the Manila Hotel February 25 to 27 for the Third Global Summit of Filipinos in the Diaspora.

The summit is held every two years with assistance from the Commission of Filipinos Overseas. CFO Chair Sec. Imelda Nicolas welcomed the delegates, while budget secretary Butch Abad gave an update on the reform programs of the Aquino administration.

There are 10.5 million overseas Filipinos consisting of 4.9 million permanent immigrants or naturalized citizens of other countries, 4.2 million temporary immigrants or OFWs and 1.36 million irregular immigrants or undocumented, according to CFO data.

Loida Nicolas Lewis, president of the Global Filipino Diaspora Council, exhorted delegates to “work together, use our skills and knowledge and give back to the Motherland.”

Meanwhile, lawyer and INQUIRER.net columnist Rodel Rodis of the US Pinoys for Good Governance asked overseas Filipinos to continue participating in the political life of the country and contribute their voices in international issues confronting it, such as the West Philippine Sea conflict with China.

Other messages and presentations covered interests such as medical tourism, retirement in the Philippines, overseas voting, prospects for the return and integration of overseas Filipinos, remittances, action plans for “2015 and beyond” and entrepreneurial initiatives by expatriates.

Participants represented a wide range of interests and concerns. Copenhagen-based Rosalyn Dawila Venning, originally from Tawi-Tawi, is now working in Sabah, Malaysia as founder and director of PKPKM Education Projects for stateless children, many of whom are Badjau Laut. She has helped educate 1,900 stateless kids with the help of the Finnish Embassy and firms like Sime Darby.

“Philippine Ambassador Ed Malaya is also very helpful in introducing me to potential donors,” said Venning, a Muslim. Venning shared a table with Dr. Roel Palo Anicas, an arts and education academic manager in Dammam, Saudi Arabia, who is active in helping protect the rights of domestic helpers.

Louella Cabalong, an IT consultant with Sears Holdings in Chicago, along with her nurse-husband, Baron, is setting up “youth-led medical missions,” even while being active in the Sama-Sama musical project, which produces folk-modern fusions of Filipino music.

“I find gatherings like this very informative and I love meeting people from all over the world,” said travel consultant Azucena Lumagbas, based in Winnipeg, Canada, but now working in Phnom Penh, Cambodia.

The Castanedas of Sanya, Hainan, are active in the Sarap-Buhay Group, of which Roger is president. It is a mutual-help network of Filipinos working in China and elsewhere. “If anyone needs support for whatever reason, they can come to us and we will help them,” Roger enthused.

Supporters of the summit include Medical City, Vibal Group of Companies, Department of Tourism, The Filipino Channel, Philippine Retirement Authority and Manila Hotel.