US shows off advanced spy plane’s capabilities to PH Navy 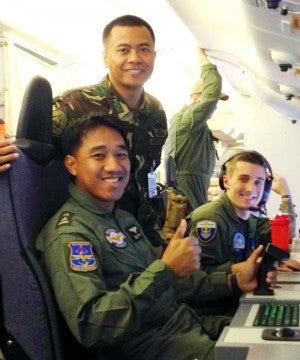 Members of the Philippine Air Force and Navy recently participated in a familiarization flight on the P-8A Poseidon during a professional knowledge exchange with Patrol Squadron (VP) 45./ US 7TH FLEET

MANILA, Philippines—The United States has started flying one of its most advanced spy planes over the West Philippine Sea (South China Sea).

Members of the Philippine Air Force and Navy were included in a familiarization flight by the US Navy P-8A Poseidon on Feb. 17 during a detachment to Clark Air Base, the US Navy said in a statement.

“The flight was a bilateral patrol mission in airspace off of Luzon Island and allowed the US Navy air crew to demonstrate the P-8A’s capabilities in both the littoral and open ocean environment and the flight characteristics of the P-8A in both high altitude reconnaissance missions and low altitude patrol regimes,” the statement added.

Islands claimed by the Philippines in the West Philippine Sea are off Luzon Island.

The Philippines is one of the claimants of the resource-rich disputed sea, with China claiming most of its parts. The mission comes amid China’s aggressiveness in the region.

“It was a remarkable opportunity to work alongside the members of the Filipino Armed Forces,” said US Navy Lt. Matthew Pool, Combat Air Crew 4 patrol plane commander. “Sharing this aircraft’s capabilities with our allies only strengthens our bonds.”

The P-8A is described as “the most advanced long range antisubmarine and antisurface aircraft in the world. It has superior maritime intelligence, surveillance and reconnaissance capability.”

“These are all intended for watching over South China Sea to ensure the freedom of navigation and sea lanes of communication,” he said, adding:

“They said they don’t take sides in the dispute in Asia and we respect the US for that statement but just the same it is to the interest of everyone to ensure that commerce and trade really flows in these seas and that it is not hampered.”

US toughens stand on sea row