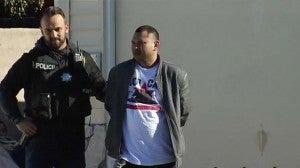 An unidentified Filipino is led away in handcuffs after San Jose Police raided a Filipino store for illegal activities. ABC7 NEWS PHOTO

SAN JOSE, California — Police arrested several people in a raid against illegal gambling in a Filipino store in this South Bay Area city on Tuesday, February 24.

A police Special Operations Merge Unit raided the store at around 10:30 a.m. as part of a sting on illegal gambling operations in San Jose.

“We believe that there was an on-going criminal enterprise here involving illegal gaming, as well as other crimes such as stolen vehicles, anything from prostitution to narcotics and we believe that some of the suspects that were involved in this case may have been armed, that’s why we utilized our SWAT team,” San Jose Department Lt. Jason Dwyer told ABC7 News.

San Jose police arrested four people at a home a few miles away on Bouveron Court, one of whom was the owner of the store. Police haven’t released the names of suspects.

Police this residence had been at the center of multiple noise and crime complaints in recent years. About a dozen people were led out in handcuffs into a police van near Vernice Avenue and Regan Street.

A law enforcement source said gambling machines were also found there. Neighbors were not surprised by what they saw. The place was apparently the source of loud noises created by many visitors.