Wescom chief: We will fight for Pag-asa island ‘until our last breath’ 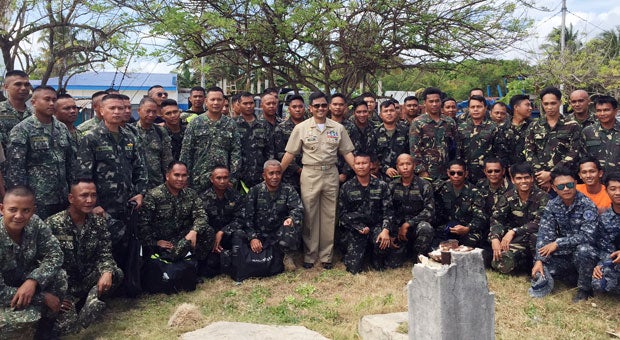 PAG-ASA ISLAND, Philippines — Western Command chief Vice Admiral Alexander Lopez, who visited the far-flung community in Pag-asa (Thitu), on Wednesday said that the Philippines will continue to fight for the island, one of the many disputed territories in the West Philippine Sea (South China Sea).

“Your stay here will sustain our effective presence na atin ito. Teritoryo ito ng Pilipinas at pangangalagaan ko. That makes your duty here patriotic again being your commander of Western Command, with due respect to the Coast Guard, hindi natin papabayaan mawala itong territory ng Pilipinas. Come hell or high water, it will remain as such. We will fight ‘til our last breath,” he said in his talk to men.

(Your stay here will sustain our effective presence. This is Philippine territory and I will protect this. That makes your duty here patriotic again being your commander of Western Command, with due respect to the Coast Guard, we will not let this territory slip Philippine sovereignty. Come hell or high water, it will remain as such. We will fight ‘til our last breath.)

Lopez and other Wescom officials, some members of the local provincial government of Palawan, visited Pag-asa on Wednesday to celebrate the 1986 Edsa Revolution and the Wescom anniversary.

During the visit, a cultural presentation was held, a Mass, a flag-raising ceremony, and gift-giving to residents and soldiers. Children were also treated to Jollibee meals and the presence of the mascot itself.

“Hindi kayo nawala sa isip naming (You are always on our minds). We’ve been praying that we would get new equipment, new hardware so we can sustain your presence here. What you’re doing is not easy. True to form, we are the defenders of this main frontier, hindi last frontier,” Lopez told the troops.

Lopez holds jurisdiction of Palawan including the disputed territories in the West Philippine Sea.

Pag-asa is one of the Philippine-occupied territories, and the only civilian-occupied in the West Philippine Sea, with a population of about 200.  Other detachments in the Kalaayan Island Group are Ayungin Shoal (Second Thomas Shoal), Lawak (Nanshan), Parola (Northeast Cay), Patag (Flat), Kota (Loaita), Rizal (Commodore), Likas (West York), and Panata (Lankian Cay).

“What you’re doing here is beyond the call of duty. Willing kayo mamatay, willing to sacrifice. Hindi ito katulad ng Puerto Princesa city, nandyan ang Chowking, McDonald, dito wala. Araw-araw same place, face (You are willing to die and to sacrifice. Unlike in Puerto Princesa city where you have Chowking and McDonald’s, there is nothing here. You see the same place and face day-in and day-out),” he said.

He also urged the soldiers stationed in the island to act as one.

(I want you to see beyond your being Coast Guard, Air Force or Navy. We have to be one especially here. Perhaps if you live in one camp, come up with a daily routine activity that is synchronized—not like the Air Force is doing one thing, while the Navy is doing another. I will ask the permission of Coast Guard let the activities be one, be synchronized. At the end of the day, you will be the ones who will help each other and not work separately. I am telling you, you are luckier than the ones in Ayungin.)

Soldiers stationed in Ayungin Shoal are aboard the rusty and dilapidated ship BRP Sierra Madre. They are surrounded by water for about six months during their assignment period.

“Try to develop your camaraderie and oneness here… We are all brothers in arms. Whatever happens here all are involved for the protection of this municipality,” he said.

He also asked the Air Force men to take care of the 1.3 kilometer airstrip which is threatened

He assured that there will be more visits in the island by the military leadership.

Major Ferdinand Atos, island commander in Pag-Asa for three months now, said they were happy with the visit of the Wescom chief.

(Honestly, seeing our commander and talking to him boost our morale. Despite the warm weather, they still came and we are happy with the gifts they gave us.)

Job to die for: Seaman now a teacher on Pagasa Island