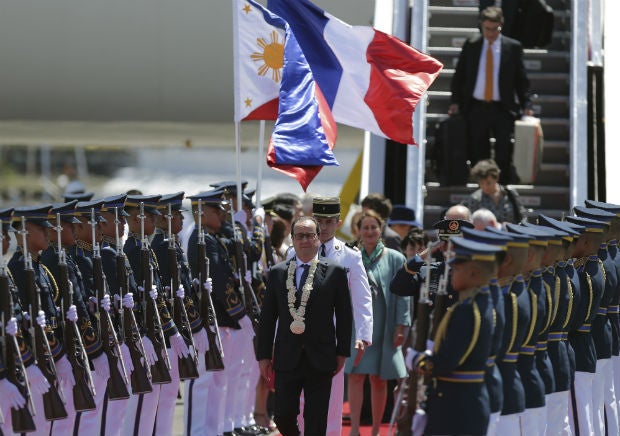 French President Francois Hollande, center, walks during arrival honors at the Villamor Air Base in suburban Pasay, south of Manila, Philippines Thursday Feb. 26, 2015. Hollande is in the Philippines for a two-day visit. AP

MANILA, Philippines – French President Francois Hollande arrived in the country on Thursday morning for a two-day state visit to drum up support for the campaign against climate change.

Hollande’s presidential plane landed at Villamor Airbase at around 11:20 a.m.

An arrival honors led by Vice President Jejomar Binay and Foreign Affairs Secretary Albert del Rosario at the Villamor Airbase greeted the president while descending from the Cotam one, the air traffic control sign for the Airbus 330 carrying the President of France.

President Aquino was not at the Villamor Airbase to lead the ceremony.

After the greetings, Hollande walked on the red carpet as he headed to the Kalayaan Hall of Villamor before he and his entourage proceeded to a wreath-laying ceremony at the Rizal Monument in Rizal Park at 11:45 a.m. 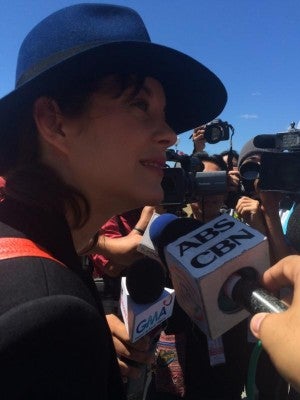 Cotillard who was behind the entourage was seen walking with crutches before boarding a bus ferrying the French delegation.

“We want to share our thoughts on the issues of climate change. It’s not just the climate change but the survival of the millions of people on this planet. Philippines of course, is one of the first countries who are aware that something should be done,” Cotillard, an award-winning actress known for her roles in “La Vie en Rose” and “Inception.”

Asked why she was walking with crutches, Cotillard replied: “Oh nothing serious… I am doing good.

Hollande’s state visit was considered to be historic since it is the first visit of an incumbent head of state of France since the diplomatic relations between the Philippines and France was established.

In 2012, then French Prime Minister Jean-Marc Ayrault undertook the first visit by a French head of government to the country.

Since being hit by Super Typhoon Yolanda (international name Haiyan), which left more than 6,000 people dead, the Philippines has been considered among the frontline nations against climate change. The country has also taken on a higher profile among developing countries in climate change negotiations.

France will host the United Nations Climate Change Conference in December. Hollande earlier said he wanted to reach a historic agreement, a comprehensive climate change pact to replace the 1997 Kyoto Protocol, especially after the failure to reach an accord in Copenhagen in 2009.

Hollande is scheduled to visit the Rizal Monument for a wreath-laying ceremony before attending a series of events in the afternoon.

After attending a business forum, titled Philippines-France: Climate Change and Inclusive Growth, in Makati, he will pass by the National Museum for an informal meeting arranged by the French Embassy.

A welcome ceremony will also be held at Malacañang where Hollande will meet President Benigno Aquino III.

The highlight of the day will be the launch of the “Manila Call to Action for Climate Change,” also in Malacañang.

On Friday, he will visit Guiuan, Eastern Samar, one of the areas worst hit by Supertyphoon Yolanda in 2013.