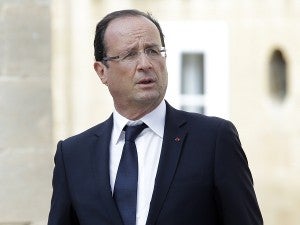 MANILA, Philippines—French President François Hollande begins on Thursday his two-day state visit, bringing along a delegation that includes British actor Jeremy Irons, French actress Marion Cotillard, and other celebrities known for their staunch support for the environment and advocacy for action on climate change.

Hollande’s visit, the first by a French president since the Philippines and France established diplomatic ties in 1947, reciprocates President Benigno Aquino III’s visit to Paris in September last year.

Details from the Department of Foreign Affairs (DFA) and the French Embassy in Manila showed that Hollande will fly from Paris with a delegation of more than 100 members and land at 11 a.m. Thursday at the Villamor air base in Pasay City.

Hollande’s schedule includes a state dinner hosted by President Aquino, a wreath-laying ceremony at the Rizal monument at 11:30 a.m. Thursday and a speech at a business luncheon and forum organized by the Makati Business Club on the topic “Philippines and France: Climate change and Inclusive growth.”

The official and his party will also attend a climate change forum at the National Museum in Manila titled “Climate Change: Cop 21: Civil Society mobilized for the Climate.”

France will host in December this year a Conference of Parties or COP 21, which seeks to wage war against global warming.

Hollande and Mr. Aquino will meet for bilateral talks and the official launch of the “Manila Call to Action for Climate Change,” where they are expected to make a joint call for the world to act together in reducing carbon dioxide emissions.

“They will also exchange views on pressing and regional issues, including terrorism, [as] recently manifested in France in the Charlie Hebdo killing spree that claimed the lives of 20 people in the heart of Paris,” the DFA said of the Jan. 7 terror attack on a French satirical magazine known to put out cartoons of the Prophet Mohammed.

Hollande is scheduled to make a two-hour visit and meet with fisherfolk in Guiuan, Eastern Samar, where Supertyphoon Yolanda first struck in November 2013, before heading back to Manila and onward to Paris.

Your subscription could not be saved. Please try again.
Your subscription has been successful.
Read Next
Filipino youths in US urged: Apply for immigration relief, don’t be afraid
EDITORS' PICK
Makabayan bloc blasts bid to expand US access to more military bases in PH
Fuel price rollback expected on Feb 7
Philippine-United States alliance ‘rock solid’ — DFA
House energy committee chair Arroyo bats for cheap electricity
Omega Speedmaster super racing: Tiny device massive change
vivo Philippines offers a free bouquet of flowers and a premium necklace perfect for Valentine’s Day
MOST READ
Vice Ganda gets called out for ‘unfair treatment’ of ‘It’s Showtime’ co-host Karylle
Fuel price rollback expected on Feb 7
Kris Aquino gets ‘renewed confidence’ after consultation with new doctor: ‘I have a strong chance of getting better’
Pokwang tells self amid revelations on past relationship: ‘Bangon, nanay ka’
Don't miss out on the latest news and information.