Filipino youths in US urged: Apply for immigration relief, don’t be afraid 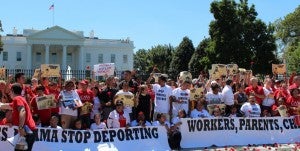 An immigration protest in front of the White House last year. PHOTO BY JON MELEGRITO

WASHINGTON, DC–Immigrant rights groups and the Philippine Embassy again urged community organizations to reach out to young people who stand to benefit from the Obama administration’s Deferred Action on Childhood Arrivals (DACA).

Although implementation of the expanded program was recently blocked by a Texas judge, DACA activists remain undeterred and view the Texas ruling as yet another attempt by anti-immigrant politicians to discourage people from signing up.

Philippine Embassy officials are also stepping up efforts to inform and encourage more Filipinos to apply, given their low rate of enrollment. “We are undertaking another outreach effort in March,” says Minister and Consul General Emil Fernandez. “Our goal is to increase the number of DACA applicants among undocumented Filipino youth by providing legal assistance, ID documentation and other vital information.”

In recent public statements, Philippine Ambassador Jose Cuisia, Jr., strongly called for greater Filipino participation in DACA. “Although it’s a temporary administrative relief,” he points out, “it allows recipients educational benefits, financial independence and greater mobility without having to worry about deportation even for a temporary period.”

Last month, the embassy partnered with the Hispanic Chamber of Commerce of Hampton Roads, Virginia, and held a DACA Information Session at the Virginia Beach campus of Tidewater Community College. It drew close to a hundred participants. In August 2014, a similar DACA Clinic held at the Philippine Embassy attracted 42 “walk-ins,” with 15 Filipinos registering.

CAPAC will continue to fight until the executive action on immigration becomes a reality, she said.  U.S. Rep. Mike Honda (D-California), CAPAC chair emeritus and immigration taskforce chair, also urged advocates: “Don’t give up, but continue the work of educating families and individuals in our communities, and make sure those who are eligible will apply immediately when the time comes.” Both expressed confidence that the ruling will be overturned.

In addition to an expanded DACA, which removes the age limit on eligible applicants, President Obama’s executive order also includes DAPA, or Deferred Action for Parental Accountability. It provides temporary relief from deportation to undocumented parents of U.S. citizens or permanent residents.

“Filipino youth face particularly high barriers to accessing information and services related to DACA,” says Angelo Mathay, who immigrated from the Philippines when he was six years old and was undocumented for 13 years. An associate policy analyst with the Migrant Policy Institute (MPI), Mathay cites the most common reasons preventing Filipinos from applying: the DACA $465 application fee; the fear that self-reporting to the government ultimately could lead to deportation for themselves or loved ones; the stigma on unauthorized immigrants that is prevalent in the Filipino community.

Mathay notes that in one of MPI’s recent reports, “Lessons from the Local Level: DACA’s Implementation and Impact on Education and Training Success,” issues of “fear and shame regarding immigration status” were uncovered as reasons deterring many potentially eligible Asian Americans and Pacific Islanders (AAPI) individuals from applying for DACA.

To overcome barriers confronting Filipino youth, Mathay is calling on community organizations to “help educate Filipino Dreamers about DACA by collaborating and coordinating their efforts across legal service and education programs in local communities.” He adds that some best practices include working with educators, school districts and school boards; local governments and churches; and partnering with the Embassy of the Philippines.

He also suggests coordination at the national level by partnering with the Asian Americans and Pacific Islanders (AAPI) DACA Collaborative or the White House Initiative on AAPIs (WHIAAPI).  Both the AAPI DACA Collaborative and WHIAAPI have used ethnic media to reach a large audience of potential DACA applicants and their family members.

In July 2013, as a DACA fellow with the National Immigration Law Center (NILC), Mathay was part of an initiative, which launched a national campaign to encourage Filipino youths to avail of U.S. immigration breaks. The initiative was a partnership led by the NILC, the Asian Pacific American Labor Alliance (APALA), the advocacy group “Own the Dream,” and the Philippine Embassy.

At the launching event held in December two years ago at the Philippine Embassy, Mathay was among a panel of speakers who discussed the benefits of DACA. “Filipinos are underrepresented among the DACA applicant pool,” he said. “Only less than a quarter of eligible Filipino youths in the United States have applied. DACA can provide parents long desired peace of mind that their young people are safe and have a fair shot at the American dream with higher wages. Unfortunately, many Filipinos do not know about the program.”

Another speaker, APALA Executive Director Gregory Cendaña, urged Filipino teens and young adults who grew up in the United States to apply for DACA because it protects them from deportation, provides them the opportunity to obtain legal papers, such as a valid social security number and work permit.

During the forum, the Embassy cited a quarterly report by the U.S. Citizenship & Immigration Services (USCIS), which stated that as of March 2014, only 4,041 (out of 20,000  DACA-eligible Filipino youths across the country) have applied for DACA. 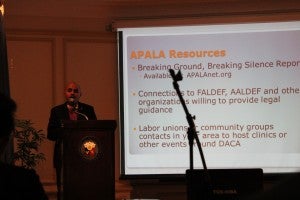 Greg Cendana of the Asian Pacific American Labor Alliance, one of the groups collaborating on DACA outreach to Filipinos. PHOTO BY JON MELEGRITO

Out of that number, only 3,644 have been approved for deferred action status. Consul Arlene Magno pointed out that the number of applicants and those who get approved constitute only “a small percentage” of those who are eligible for the administrative relief. And while there has been a gradual increase in the number of applications since the program’s one-year mark in August 2013, there is still “a very slow progress” in terms of new applications among Filipinos.

Other speakers pointed out ethnic media’s role in education and information dissemination. Adam Luna, Director of “Own The Dream,” said the reason DACA remains “obscure for most Filipino youths may be due to the fact that much of the publicity is directed towards the Latino community.”

Filipino community leaders, he said, must help fill the information gap, clear up misinformation and bring the benefits of DACA to Filipino youths who grew up in the United States.

“The embassy’s strong reputation and public commitment to the program and partnership with the only nationwide effort to implement the program will also allay any fears from a community which, by necessity, has lived in the shadows for far too long,” Luna said.

Cuisia explained why the embassy decided to get involved: Filipinos have not actively embraced the immigration breaks offered by DACA more than a year after it was implemented, he said. Although Filipinos have a higher than average approval rate, Cuisia lamented that only 16 percent have applied.

“We believe that raising awareness can allay the fears of potential applicants so that, hopefully, more youth may deem it best to avail themselves of this immigration relief,” Cuisia said. “I hope that the campaign would be able to present eligible Filipinos with an option that is workable and useful.”

Philippine consulates from Los Angeles to New York have been following the ambassador’s lead in encouraging partnerships with immigrant rights groups and community organizations invested in this campaign.

At a meeting of consuls general at the Philippine Embassy in Washington, DC in September, consular officials mapped out strategies to promote DACA and other immigration-related issues, such as the granting of Temporary Protected Status (TPS) to the Philippines.

“We need to work closely with Filipino American organizations in our various jurisdictions, as well as partner with immigrant rights groups, so we can use their resources, maximize our efforts and undertake these initiatives more effectively,” the ambassador told the consuls general.

As part of the Embassy’s push to increase awareness on DACA, consulates across the country have been inviting community relations representatives from the USCIS to participate in consular outreach missions in various states. “The Embassy wants to tangibly contribute to the community’s awareness of DACA through our various information campaigns and events,” Consul Magno said.

The next Embassy DACA Clinic will be co-sponsored with the Service Employees International Union’s (SEIU) iAmerica program in March.

Immigration–best to apply ASAP for DACA or DAPA