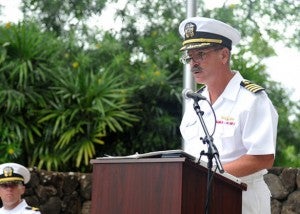 SAN FRANCISCO — China is flexing its muscles and preparing for military conflict in Asia, the outgoing intelligence chief of the US Navy’s Pacific Fleet recently warned.

The warning came amid Beijing’s feverish reclamation efforts in disputed reefs and islets in the South China Sea that analysts said could be converted into naval and air force bases to project its military might and dominate China’s smaller neighbors.

“The strategic trend lines indicate the Communist Party of China is not only ‘rejuvenating’ itself for internal stability purposes, but has been and continues to prepare to use military force,” Navy Capt. James E. Fanell said during a speech January 31 before more than 100 guests, including several admirals, at Pearl Harbor.

The straight-shooting intelligence officer, who is retiring after more than 28 years in the Navy, said it would be unwise for the United States to ignore or paper over the warning signs of China’s increasingly aggressive behavior.

“…[L]et’s not deceive ourselves. The evidence I’ve been chewing on over the past 15 years is overwhelming,” Fanell said in a blunt warning first reported by the Washington Beacon. “Beijing has prepared for military action and [Chinese] President Xi Jinping’s ‘China Dream’ has a defined timeline to reach this ‘rejuvenated’ end state.”

Fannel urged his fellow intelligence officials to present honest assessments of the danger posed by China’s growing military power, an oblique reference to what officials consider as numerous U.S. intelligence failures in assessing China’s military build up over the last few decades.

“The challenge, as I have seen it, is for intelligence professionals to make the case, to tell the truth, and to convince national decision- and policy-makers to realize that China’s rise, if left unchecked or undeterred, will necessarily disrupt the peace and stability of our friends, partners, and allies,” he stressed.

“We should not have to wait for an actual shooting war to start before we acknowledge there is a problem and before we start taking serious action,” Fanell added.

According to the career intelligence officer, China’s Communist Party is pursuing plans that “stand in direct contrast to espoused US national security objectives of freedom of navigation and free access to markets for all of Asia.”

For instance, Fanell observed that the Chinese navy is taking steps to achieve strategic objectives that include the restoration of what Beijing says is “sovereign maritime territory,” specifically thousands of square miles of water inside the so-called first island chain — a string of western Pacific islands near China’s coasts stretching from Northeast Asia through the South China Sea.

He said the Obama administration’s so-called pivot to Asia, a policy of shifting forces to the Asia-Pacific region, is a good first step to counter the challenge of China.

“But it must be backed up with a real, tangible deterrent force and we must stand up to Beijing’s propaganda and bullying campaign, especially those that come at the expense of our allies and partners,” he said.

Fanell said the “rebalance” features the shift of some troops, naval and air forces to the region, but it has been inadequate due to sharp defense cuts under the Obama administration and continuing US military commitments in the Middle East.

A native Californian, Fanell is a graduate of San Diego State University in 1985 with a degree of history and political science and the University of Hawaii with an M.A. in history in 1997.

Fanell has had extensive experience serving in the Pacific, giving him a profound insight into the changing dynamics of how the region’s navies operate. In 1991, he was named one of the first China maritime watch officers by the Joint Intelligence Center, Pacific. And from 2005 to 2006, he studied China’s naval operations as a national security affairs fellow at Stanford University’s Hoover Institution.

Fanell’s provocative comments about Chinese maritime assertiveness — especially against the Philippines, Vietnam and Japan — have stirred an international controversy that led to his being shelved for a while from his top intelligence job.

For instance, Fanell recently asserted that China now has eight military installations on seven reefs in the Spratly Islands being claimed by the Philippines.

China, he pointed out, “is challenging other nations’ rights under the rubric of “what’s mine is mine, and we’ll negotiate what’s yours.”

He branded as “outright Chinese aggression” Beijing’s 2012 seizure of Scarborough Shoal (Bajo de Masinloc), about 137 miles off Palauig town in Zambales, after a tense standoff with the Philippines.

Japan Military Review, a defense magazine based in Tokyo, observed that China’s reclamation frenzy in disputed reefs and islands in the South China Sea was part of Beijing’s plan to use them as its “first island chain,” intended to contain U.S. military facilities in Australia.

Citing a blueprint drawn by the Ninth Design and Research Institute of the state-run China State Shipbuilding Corporation, the report said that the People’s Liberation Army (PLA) plans to build both naval and air force bases on the six islands and reefs under its control in the South China Sea.

Already, China is said to be constructing an airfield on Johnson South Reef, known in the Philippines as Mabini Reef, in which the Philippines said about 10 hectares (about 25 acres) has been reclaimed in what it fears China would transform into a military base.

Johnson South Reef, which is also being claimed by Vietnam, was the scene of a bloody confrontation in 1988 that resulted in the death of 70 Vietnamese and the sinking of two Vietnamese boats and the Chinese occupying the reef.

Apart from Mabini Reef which also features a three-storey concrete building ringed with gun emplacements and a helipad, the other reefs being developed by China are:

*Cuarteron Reef – a permanent reef fortress, supply platforms, and naval and anti-aircraft guns. An airstrip is reportedly being planned.

*Subi Reef – a permanent reef fortress and supply platforms that can house troops, has a helipad and is armed with four twin-barrel 37mm naval guns. Also houses a Doppler weather radar.

China already maintains a military outpost in Woody Island in the Paracels. Vietnam and Taiwan are contesting the island, which currently has a population of more than 1,000 and features an artificial harbor capable of docking vessels of up to 5,000 tons and an airport with a 2,700-meter runway capable of handling fighter aircraft.

Alunan is convinced that China’s assertiveness in disputed areas reflects its intentions of making “vassals states” of South China Sea rim nations, adding tension in a region that, he said, has become a flashpoint for armed confrontation.

The Annapolis trained Golez said a Chinese base in the area could be a “game changer,” because it would allow Beijing to intimidate countries that have competing claims in the disputed areas.

Golez said because of its strategic location, a base in Mabini Reef would allow China to hit at targets in the entire Philippines, Singapore, most of Vietnam, part of Malaysia, part of Indonesia and the whole of Borneo.

“So, it can threaten all our vital military installations, including installations we can make available under EDCA,” he added, referring to the Enhanced Defense Cooperation Agreement which seeks to bolster U.S.-Philippine security cooperation by allowing America to station troops and operations on PH territory.

China hits out at US proposal on South China Sea