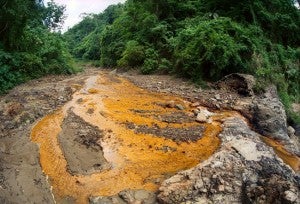 Attorney James McCarthy, who represented Marinduque, told the justices that Philippine courts ruled Barrick couldn’t be sued in the country because the Toronto-based mining company did not do business there. Since Barrick has substantial operations in Nevada, McCarthy told justices the province should be allowed to sue in the state.

“We filed here for all the right reasons,” McCarthy said, according to the Associated Press. “We chased them here. They fled the Philippines.”

About 15 protesters led by the Progressive Leadership Alliance of Nevada (PLAN) demonstrated on Tuesday in support of the Philippines, saying the state is faced with similar ecological damages from the company’s activities, Las Vegas Review-Journal reported.

“Barrick must be held accountable for the mining disaster in the Philippines in which children died,” PLAN spokeswoman Laura Martin told the Associated Press.

Protesters also call the Marinduque incident “the largest mining disaster in the history of the Philippines,” the Review-Journal reported.

Among damages for which the province is seeking compensation include tailing dam failures in 1993 and 1996 that sent contaminated mine waste into a river, leaving two children dead. The lawsuit alleges the river leading to Boac, Marinduque’s capital city, was polluted with tons of waste laden with arsenic, nickel, sulfate and lead among other chemicals.

Marinduque sued in Nevada in 2005 against Placer Dome, a British Columbia-based mining company. When Barrick acquired the company in 2006, it became part of the lawsuit.

Barrick Gold spokesman Lou Schack said the company has no ties with what happened in the Philippines in the 1990s. Steve Morris, who represents the company, said Barrick Goldstrike, which operates in Nevada, is actually a company subsidiary.

In 2011, Clark County District Judge Valerie Adair dismissed the suit, saying it should have been filed in Canada or the Philippines rather than in Nevada.

“She concluded that Canada has a greater interest in the issue,” Morris told the justices.

A ruling was not immediately issued after Tuesday’s hearing.