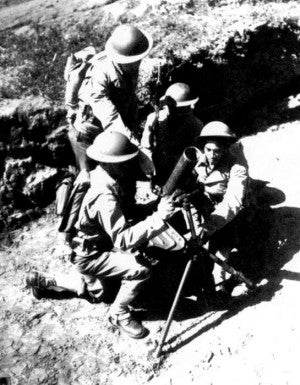 The day after the bombing of Pearl Harbor, Filipinos in the United States, those we now respectfully call the “manongs,” began a drive to form an all-Filipino military unit. Quickly trained, Filipino immigrants-turned-soldiers would be sent to help push the Japanese out of the Philippines. They would fight bravely for the liberation of their homeland and for their right to be American citizens.

On January 3, 1942, President Franklin D. Roosevelt signed a law revising the Selective Service Act. Filipinos in the U.S. were now able to join the U.S. Armed Forces and they were urged to volunteer for service. The War Department stated that at least one full Filipino contingent would be organized for service overseas and it estimated the number of available Filipino volunteers between 70,000 and 100,000.

The 1st Filipino Battalion was formed on March 4, 1942 and activated on April 1 at Camp San Luis Obispo, California.

Lt. Col. Robert H. Offley, who had served in the Philippines and spoke passable Tagalog, assumed command on April 8. The War Department also directed Philippine Army officers and soldiers who were stranded in the U.S. at the start of the war to report to the unit.A number of wounded Philippine Army and Philippine Scouts had escaped to Australia from the Philippines on board the U.S.S. Mactan in December 1941. Some remained in Australia to form the nucleus of the 1st Reconnaissance (RECON) Battalion, but the rest were sent to the U.S. for further medical treatment. These men eventually reported to the 1st Filipino Battalion.

Not a Segregated Unit

Contrary to popular belief, the 1st Filipino Battalion was not established as a result of the American policy of social segregation. Only Filipinos who volunteered for assignment to the unit were sent to it. Many others, such as Eutiquio V. “Vic” Bacho, served with distinction in “American” (white) units in the European theater of operations during the war. 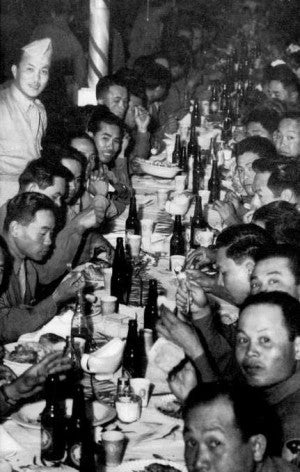 Many of these men were part of the migratory labor force that followed the harvest season along the Pacific Coast, from California farms to Washington fruit orchards and Alaskan fish canneries. Others had lifted themselves by their “bootstraps” into college and took the limited white-collar jobs that were open to them. Having endured white America’s racism, these men knew how to adapt to rapidly changing situations. They relied upon one another for strength. Communal living on the farms permitted them to adapt quickly to military life.

Leading Filipino musicians of the time made up the regimental band. Sgt. Urbano Francisco composed the regimental marching song, “On to Bataan;” but it was not uncommon for the men to march to strains of the latest “boogie woogie” or “swing” song.

By the end of May 1942, the strength of the 1st Batallion reached over 2,000 men. The unit was ordered to Salinas, California where it became the 1st Filipino Infantry Regiment on July 13, 1942.

The Salinas Rodeo Grounds, which had just been vacated by Japanese Americans who were sent to remote concentration camps, housed the regiment. A few men serving in the Regiment had Japanese wives and their children were U.S. citizens. Despite the efforts of the American Civil Liberties Union, their families were also sent into the internment camps.

In September 1942, the first group of qualified Filipino enlisted men were sent to the Officer Candidate School, Fort Benning, Georgia. Upon graduation, they were commissioned 2nd Lieutenants in the U.S. Army. The War Department planned to have Filipino officers eventually command the majority of the Filipino units.

So many Filipino volunteers came from all over the U.S. that the 2nd Filipino Infantry Regiment was formed at Fort Ord, California on November 22, 1942. In January 1943, the 1st Regiment was assigned to Camp Beale, near Sacramento and the 2nd Regiment to Camp Cooke, near Santa Maria. The units underwent intensive training for combat deployment in the Pacific by early 1944.

As a result of a May 1942 Gallup Poll showing strong support for the naturalization of Filipinos, the Filipino Naturalization Bill was passed. Pinoy GI’s were urged to apply for U.S. citizenship. A mass swearing in of over 400 soldiers was held at Camp Beale on February 20, 1943. Many of the men, however, resisted becoming citizens. T-5 Julius B. Ruiz stated that although he had lived in the U.S. for many years and was now serving in the U.S. Army, his goal was to liberate his country, the Philippines.

The regiments also became a pool of Filipino personnel for special assignments and missions. In Australia, Gen. Douglas MacArthur, who was trying to coordinate the various guerrilla movements in the Philippines, desperately needed Filipinos to penetrate the Japanese-held archipelago. Col. Courtney Whitney inspected these units in February 1943 and selected over 800 volunteers to serve in the 1st Recon Batallion. Eventually, over 280 1st Recon secret missions were sent into the Philippines between August 1943 and March 1945.

A few days after the 1st Regiment arrived in New Guinea in May 1944, the unit was diverted from its training mission. A white general assumed that the men were to be used as “coolie labor” to unload the ships and to perform personal services for white officers and enlisted men. As soon as he found out, General MacArthur unleashed his wrath on these prejudiced officers. The regiment quickly returned to intensified jungle training.

In preparation for the liberation of the Philippines, MacArthur ordered the two units to contribute more than 300 men to form eight Philippine Civil Affairs Units (PCAUS), pronounced “peecows.” They were to go in with the invasion forces and reestablish control over the civilian populations in the combat zones. An additional 22 units were formed after the invasion. Immediately after an area was cleared of Japanese soldiers, the PCAUS turned over the liberated areas to the Philippine government.

The Counterintelligence Corps (CIC), also staffed with men from the two units, arrested all known collaborators. The success of PCAUS foiled Interior Secretary Herald Ickes’ plan to treat the Philippines as an occupied country.

MacArthur turned over control of the country to President Sergio Osmeña on the steps of Tacloban’s city hall on October 20, 1944.. 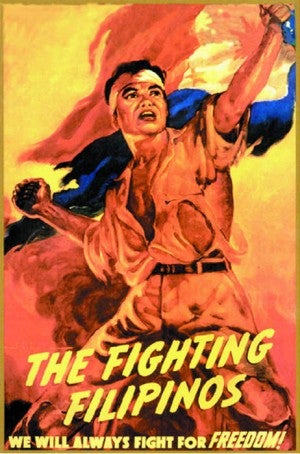 “The Fighting Filipinos” poster was drawn by Filipino artist R. Isip to commemorate the first anniversary of the fall of Bataan and Corregidor. The Philippine Commonwealth Government in exile in Washington, D.C. printed and distributed 15,000 copies to schools and associations throughout the United States

From mid-1943 through August 1945, Filipino Americans serving in the 1st Recon Battalion infiltrated the Philippines via submarine and established contact with guerrilla units. The information gathered by these commandos gave MacArthur a true picture of the Japanese strength. His presentation of these facts convinced President Roosevelt to approve the invasion of the Philippines, instead of Formosa (Taiwan).

When the invasion fleet sailed for the Philippines, the 1st Regiment and the 2nd Battalion remained in New Guinea. Its men, however, were now scattered throughout the invasion fleet and in the Philippines. The beaches between Dulag and Tacloban had been surveyed by the commandos and later by elements of the Alamo Scouts. These Filipino Americans accompanied the 6th Ranger Battalion on October 19, 1944 as it seized the islands guarding the approaches to Leyte Gulf.

On the morning of October 20, 1944, T-5 Ponciano S. Dacones from PCAUS #5 was in the first wave to hit the beach near Dulag, Leyte. He raised the Philippine national flag on the beach. He was killed in action a few days later. On the evening of January 20, 1945, a force consisting of the Rangers, “Alamo Scouts” and 300 guerrillas liberated more than 500 allied prisoners.

Meanwhile in New Guinea, the 1st Regiment quickly integrated its first batch of replacements consisting of Filipino Americans from Hawaii. Colonel Offley gave Lt. Col. Leon Punsalang, a West Point graduate, command of the 1st Battalion. This was the first time in the history of the U.S. Army that Asian Americans commanded white troops in combat.

The 1st Regiment landed in Tacloban, Leyte on February 7, 1945 and fought the Japanese troops in Samar. In one combat action, the regiment reported killing 1,572 Japanese soldiers while five of its men were killed in action. In May 1945, the regiment began operations in northern Leyte in the Villaba-Palompon sector where it fought heavily for the next two months, registering an average of 40 Japanese killed and 32 captured a day. The 2nd Filipino Infantry Battalion, as a unit, never saw combat. It was sent to Manila to provide support to the PCAUS operating there.

On August 15, 1945, all operations for “the 1st and the 2nd” in the Philippines came to a close. The 1st Recon Battalion was deactivated. The PCAUS were disbanded and their operations turned over to the Philippine government. The men were given leaves and told to report to the 1st Filipino Infantry Regiment in Ormoc, Leyte.

The families of many of these men had given up hope of ever seeing their sons and brothers return from the land of broken promises and dreams. The manongs, who were despised by white America, and yet were needed in the American farms and fisheries, returned to their homeland as heroes. When the men reported back to the 1st Regiment in Leyte, many brought with them new brides. A tent city was set up for the married couples. It was the beginning of the “War Bride” generation and a family-based Filipino American community.

In March 1946, men who wanted to remain in the Philippines or were not yet eligible to return to the U.S. were transferred to the 2nd Infantry Battalion, then stationed in Quezon City. It was disbanded on March 31, 1946. The 1st Regiment troops returned to the United States and arrived in San Francisco in the early morning hours of April 8, 1946. They were bused to Camp Stoneman, near present-day Pittsbur, California, and quickly discharged. A few men were present on the morning of April 9, 1946 when the flag, hand sewn by the wives of the officers of the regiment, was folded for the last time.

Having been denied the right to be Americans in the 1930s, many manongs fought for the right to be citizens of this country by serving in the armed forces in World War II. After the war was over, the G.I. Bill of Rights opened the doors to education, employment and opportunities. Some of the men remained in the military; others took advantage of the new opportunities. Many returned to the fields and canneries, while others took urban jobs in hotels, restaurants and the civil service.

Before its expiration on December 31, 1953, many manongs took advantage of the War Brides Act and returned to the Philippines to marry. These families became the nucleus of a new generation of Filipino Americans.

First published in Filipinas Magazine, September 1993. For more stories on the Filipino diaspora go to PositivelyFilipino.com