Pope to PH: Evangelizing Asia is your mission 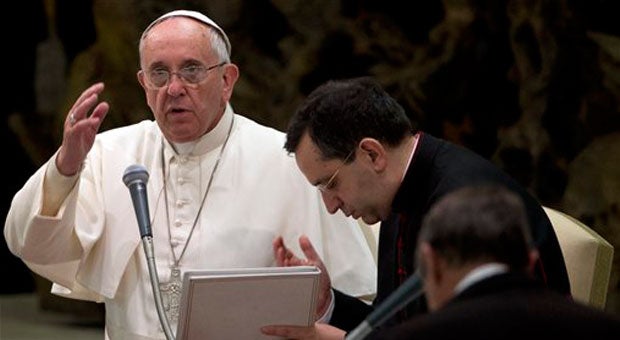 Pope Francis delivers his blessing during his weekly general audience in the Paul VI hall at the Vatican, Wednesday, Jan. 21, 2015. Pope Francis is praising big families after saying Catholics don’t have to breed “like rabbits.” He says big families are a gift and don’t cause poverty in the developing world, and that the real cause of poverty is an unjust economic system that idolizes money over people. AP PHOTO/ANDREW MEDICHINI

VATICAN CITY—Pope Francis told hundreds of pilgrims from all over the world attending his regular Wednesday audience that it was the Philippines’ mission to evangelize the “great continent of Asia.”

He also praised the “large families” in the Philippines, calling them a “gift from God.”

The remark apparently was to clarify the statements he made during a press conference aboard the plane taking him back to Rome after his highly successful visit to the Philippines from Jan. 15 to 19 that Catholics “should not breed like rabbits.”

His unusually frank language raised negative reactions, particularly on social media, where some commentators said it was offensive to people who were raised in large families.

The Pope said that while in the Philippines, it gave him great “consolation and hope to see so many large families who welcome children as a true gift of God. They know that every child is a blessing.”

He said to blame big families and overpopulation for poverty was “simplistic.”

The Pope said the real cause of poverty was an unjust economic system that idolized money over people.

“Let us all say that the principal cause of poverty is an economic system that has taken the person from the center and put the god of money in its place,” he said to the loud applause of the audience.

Reporting about his recent Asian pastoral trip to Sri Lanka and the Philippines, he said he commended the Philippines to “its patron saint, the Holy Child of Jesus, so that it could perform its role of evangelizing the great continent of Asia.”

He said his visit to the Philippines was significant as the country was the foremost Catholic country in Asia and was marking the fifth centenary of the introduction of Christianity.

Francis spoke about the big crowds that welcomed him during his visit to the Philippines.

“I keep ever in my heart the memory of the festive welcome on the part of the crowds, in some cases virtually oceanic, which accompanied the salient moments of the trip,” he said.

The Pope called the Philippines “the principal Catholic country of Asia whose people practice their faith even when forced to work abroad.”

“The Filipino people are well known for their profound faith, their religiosity and their enthusiasm, also in the diaspora,” he said.

He said he traveled to the Philippines principally to console the survivors of Supertyphoon “Yolanda” (international name: Haiyan), and while bad weather forced him to cut short his visit to Leyte province he was able to “render tribute to the faith and the capacity for recovery of the local population.”

Francis noted the deep faith of the typhoon survivors.

“The strength of the love of God, revealed in the mystery of the Cross,” he said, “was rendered evident in the spirit of solidarity demonstrated by the many acts of charity and sacrifice that marked those dark days,” he said.

The Pope, in his meeting with young people at the University of Santo Tomas, urged the youth to serve the poor and protect the environment.

Francis earlier pointed out that Christianity also had deep roots in Sri Lanka.

He explained that he went to the South Asian country in order to canonize Fr. Joseph Vaz, who helped rebuild the Church of Sri Lanka in the 17th century in the face of persecution by Protestant Dutch colonists.

He said his visit in Sri Lanka was meant to promote “peace and reconciliation” as well as dialogue among religions in “a multicultural context.”

During his recent trip, his second to Asia after Korea last August, Francis gave a very vigorous defense of the controversial 1968 encyclical “Humanae Vitae” by Pope, now Blessed, Paul VI, which reaffirmed the Church’s long-standing position against artificial birth control.

Paul VI issued the document at a time when the Church was under pressure to modify its position on sexuality in the light of claims that overpopulation would cause famine and disaster.

In his remarks especially in the Philippines, the Pope condemned “ideological colonization” in which agencies would impose conditionalities on grant applicants in order to promote western sexual and materialistic values on the Third World, disparaging their “culture and identity.”

The Pope warned that contraception and population control had resulted in dwindling birth rates in Europe, which would have an impact on social security.

In the press conference on the papal plane on Jan. 19, the Pope also condemned “Neo-Malthusianism,” referring to the teachings of the 19th century Anglican cleric Thomas Malthus who warned that population growth would outpace the capacity of the planet to sustain life for future generations.

“What do you call Neo-Malthusianism? Less than 1 percent of birth rate in Italy. The same in Spain. That is Neo-Malthusianism that seeks to control humanity on behalf of the powers that be.”

Read Next
Hiring maids in Singapore becoming more costly with tighter regulations
EDITORS' PICK
Next level mobile photography within reach with vivo X70 co-engineered with ZEISS
153 protests filed vs China actions in PH waters in 2021 — DFA
Lacson wants DOF to suspend TRAIN law as oil prices rise
Delivering delight against all odds
Leaked: A 60x Zoom and all-new Helio G96 mean a complete overhaul for TECNO Mobile’s new CAMON 18 series
Duterte blasts rights groups for overlooking the ‘other side’ of drug war
MOST READ
Robredo to supporters: Be calm, gentle and do good deeds
Duterte inaugurates P684-M bypass road project in Quezon
Matibag calls Senate budget hearing ‘political,’ gets kicked out
Duterte: No drug dealers among the rich in PH
Don't miss out on the latest news and information.