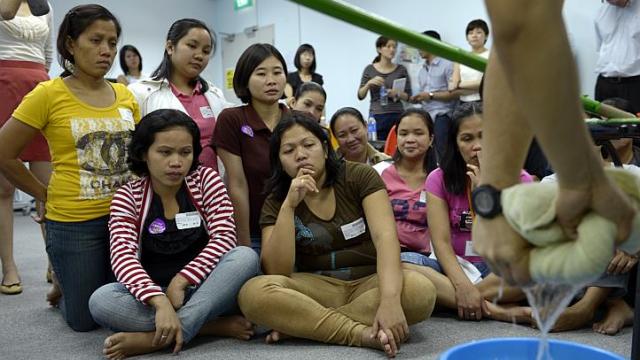 Maids attend a one-day compulsory Settling-In-Program course in 2012, which teaches first-time maids how to work safely and adjust to life in Singapore. The Straits Times/Asia News Network

The Philippine government is looking to introduce a quota on foreign maids in Singapore, which could see the supply of maids here dropping by as much as 20 percent.

The Indonesian government has also raised the minimum monthly salaries of Indonesian maids here to $500, up from the previous $450 level.

Vicente Cabe, labor attache at the Philippine Embassy here, told The Straits Times that a new cap on the number of maids coming to Singapore each month will be announced next month.

Currently, there is no quota on the number of Filipino domestic workers who come to Singapore. But industry players estimate that 1,000 Filipino maids arrive here each month.

“The plan is to bring down the total number of Filipino domestic workers in Singapore by about 20 per cent in the next two years,” said Cabe.

There are 70,000 Filipino domestic workers here, based on estimates by the Philippine Embassy.

Similarly, the Indonesian Embassy has introduced changes to the salaries of Indonesian maids. There are about 125,000 Indonesian domestic workers in Singapore.

The embassy had announced in a letter to Singapore maid agents that, from last September, Indonesian maids must be paid at least $500 a month, up from $450 a month previously.

Indonesian Embassy counsellor Sukmo Yuwono said that he will ban Singapore maid agents from recruiting maids if he finds out that the workers are being paid less than $500 a month.

“The Indonesian domestic workers have been briefed in training centers that they should be paid a minimum of $500 a month. They will complain to me if they are paid less and I will stop the agents from recruiting maids,” said Sukmo.

He added that the Indonesian government will be announcing a new policy to reduce the fees that maids pay Indonesian agents and recruiters to get jobs in Singapore.

If the quota and the minimum wages are enforced, maid agencies here warn that the cost of hiring a maid could rise sharply.

A drop in the supply of domestic workers will in turn drive up the fees that Singapore employers pay because demand for maids is still high, said agents.

Nation Employment managing director Gary Chin said: “The new rules set by the Indonesian government reduces the money that recruiters earn. So, they will be less willing to recruit maids. The supply will slow down.”

Currently, employers pay agencies as much as $2,000 to hire a Filipino or Indonesian domestic worker. A Filipino maid earns around $500 a month.

But much will depend on how strictly the foreign governments enforce these new rules, as not all agencies follow the rules, said the Association of Employment Agencies Singapore.

When contacted, the Ministry of Manpower said it was not informed of new rules introduced by the Indonesian and Philippine governments.

“Employment agencies and employers should take these additional requirements into consideration when making their hiring decisions on foreign domestic workers from both countries,” said a ministry spokesman.

Filipina maids, other helpers being spied on in Singapore