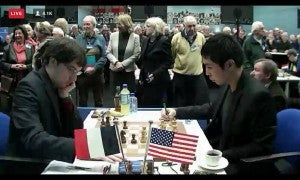 Wesley So (right) plays with Maxime Vachier-Lagrave of France in the Tata Steel chess tournament in the Netherlands. CHESSDOM.COM PHOTO

LAS VEGAS, Nevada — Chess grandmaster Wesley So was held to a draw in the ninth round, but kept his share of second place going into the homestretch of the Tata Steel chess tournament in Wijk ann Zee, the Netherlands.

World champion Magnus Carlsen of Norway scored his sixth straight win, and appears to be pulling away in the tournament that gathered together most of the best chess players in the world.

The 21-year-old So overcame a mistake in the middle game to salvage the draw with precise moves in a rook, pawn and minor piece endgame to earn the half point against Maxine Vachier-Lagrave of France.

So and Lagrave are tied for second, each with six points, a full point behind Carlsen, who beat Teimour Radjabov of Azerbajian.

After a loss and two draws, Carlsen has romped his way to the top of the standings, one game shy of the seven straight victories Fabiano Caruana of Italy scored in the Sinquifield Cup in St. Louis last year.

Caruana himself is not doing so well in this tournament with only five points, earning just a draw in his last game against the only woman participant, Hou Yifan of China.

So, the only unbeaten player so far, said he was rather quick with his moves against Lagrave.

“I played too fast,” he said in a post-game interview.

The players are feeling the effects of the horrendous weather – daily rain and bitter cold outside the playing hall – in the seaside resort, So said in a message from Wijk ann Zee.

” The schedule is terribly exhausting and the games often run quite long, ” he told his friend Eliseo Tumbaga in Manila. “We can hardly fault anyone here for losing or not doing their best.”

But he said that’s the way champions are made, and everyone is playing under the same conditions.

So will meet Liren Ding of China, who had won five straight, but lost his last game against Anish Giri of the Netherlands in the 10th round.

In the 12th and penultimate round, So tangles with Giri, the only remaining player with a higher rating than him.

The 20-year-old Giri, the only player in the tournament younger than So, holds a live official rating of 2785.7, sixth best in the world.

After a rest day Thursday, two more rounds are left before the tournament ends on Sunday with So facing Loek Van Wely of the Netherlands.

So vaults to no 6 in the world by beating Ivanchuk