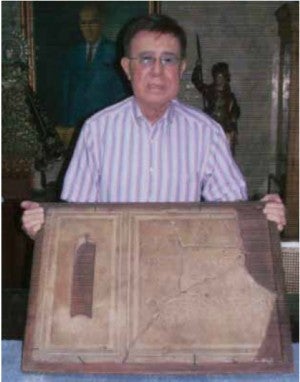 COLLECTORS COLLECTOR Former movie censors chief Manoling Morato, a well-known collector of antiquity, holds
what he claims is the tombstone of St. Fabian that he bought from the grandnephews of 19th century Filipino master Felix
Resurreccion Hidalgo. Morato says he wants to return the tombstone to the catacombs in Rome through Pope Francis or his representatives. CONTRIBUTED PHOTO

MANILA, Philippines–An impressive slab of white Carrara marble, now discolored by time, lies on a table in the Quezon City office of Manuel L. Morato. It has a very interesting history.

Supposedly, it was the tombstone that marked the burial site of St. Fabian (identified as either a bishop or Pope who died in about 250 A.D.), one of the first Christian martyrs whose remains lie in one of the catacombs beneath Rome.

Morato, its current owner, said it was 19th-century Filipino painter Felix Resurreccion Hidalgo, second-place winner after Juan Luna in the 1884 Madrid Exposition of Fine Arts, who brought it to Manila.

Morato wants to hand it back to Pope Francis (not exactly personally) while the Pontiff is here in Manila.

St. Fabian’s feast day falls on Jan. 20. If the Holy Father takes the tombstone with him, the slab and its rightful owner would be reunited in Rome in time for this religious memorial, Morato said.

By giving back the slab, the former chair of the Philippine Charity Sweepstakes Office and the post-Edsa censors’ board also hopes the sacrifice would help revive the devotion to the Christian martyr.

In an interview with the Inquirer on Tuesday night, Morato told the story of how Hidalgo’s descendants reached out to him right after the death of their father, Felipe Hidalgo, nephew of the revered but heirless painter.

It was 1981. Morato was president of two family corporations engaged in the logging business and Don Felipe had just breathed his last.

Turns out that Don Felipe inherited his uncle’s impressive antique collection acquired through trips in Europe and Asia.

Morato, who has been collecting antiques since he was 13, said the deceased’s children wanted him to have the tombstone that their granduncle Felix allegedly acquired following his impressive victory in Madrid.

The siblings also showed a framed cloth said to be from the tomb of the Blessed Virgin Mary that carried an official seal from the Israeli government.

Morato, now 81, said the tombstone was heavy, stood on the floor of Don Felipe’s bedroom in the ancestral home in front of San Sebastian Church in Quiapo and was only propped on the wall.

The framed cloth, meanwhile, hung above the dead man’s bed.

Morato was hesitant. “The body of your father is still warm. I will visit after a month,” he recalled telling Don Felipe’s children.

Morato fulfilled his promise to the bereaved and eventually purchased the relics. He would not say how much he paid to have them. “I paid a good sum” was all he said.

Morato explained that when Don Felix bought the tombstone in the late 1800s, it was not yet illegal to purchase relics from so-called “tomb raiders.”

In fact, he said this was how many of the museums in the Western world were able to line their galleries with pieces from Egypt, China and other Asian countries.

The tombstone, now lying in an equally ancient wooden encasement, measures 23 inches across and is 16 inches high. It is around 1.5 inches thick.

It has significant cracks and a significant portion of its right side is missing. Morato noted that tombstones taken from the Roman catacombs were very likely to display damage of some kind because of the forcible manner by which they were taken.

Still, he said the tombstone “definitely qualifies as a museum piece.”

The slab contains five lines of Latin inscription above a two-letter heading. Morato pointed to the first line where the name “FABIVS (Fabius)” appeared. He said this was to identify the one lying in state as Fabian.

The tombstone and the framed cloth have stayed in Morato’s bedroom in his Quezon City residence since their purchase.

Of the tombstone in particular, Morato said: “I find comfort when I see it. I feel San Fabian watching over me when I pray to it.”

When he learned of Pope Francis’ plan to visit the Philippines, Morato said he made up his mind to relinquish the tombstone if not to the Holy Father, then to his acknowledged representatives.

“I am doing this to revive the devotion to this martyr, for the people to remember who he was,” he said.

Woodene Koenig-Bricker’s book “365 Saints” (copyright 1995), describes St. Fabian as a “Roman farmer who just happened to come to town at the time a new Pope was being elected.

Fabian was chosen Pope when “a dove suddenly appeared and settled on his head, convincing everyone that (he) should be the new pope.”

Fabian was said to have served for 15 years “before being martyred during the persecution by Emperor Decius.”

Fabian was decapitated upon Decius’ orders.

The torture and murder of Christians under Decius are referred to as the Seventh Persecution in 249 A.D., part of a long period of persecution that was begun by the Roman emperor Nero in 67 A.D.

During those times, Christians who refused to denounce their faith were beaten with clubs, fed to wild beasts, decapitated or poured with boiling oil. Some were also made to walk over nails and thorns, had their tongues pulled or their eyes gouged out, or scourged until their sinews showed.

St. Peter, the first Pope of the Catholic Church, died crucified upside down during Nero’s reign.

Morato candidly admitted he had not done much research on St. Fabian but expressed confidence that “the Holy Father can tell the importance of this very sacred relic along with the Curia in the Vatican. Maybe they will know right away.”

Told that the martyr’s feast day was celebrated every Jan. 20, Morato texted: “His tombstone should be back in Rome by the 20th. The Pope will (go) back to Italy by the 20th because he is leaving on the 19th. Tamang tama pala. What a coincidence. St. Fabian wants to be brought back to Rome… Now, people who will visit the catacombs will see his tombstone again.”

“I’d probably miss this piece. It’s just that there is this sense of obligation that overcomes me. This does not rightfully belong to me. Out of respect for St. Fabian, I would like the tombstone returned to the burial site,” he said.