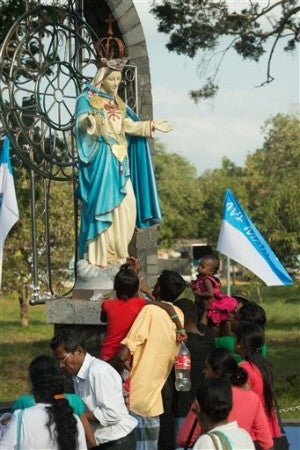 Catholic devotees touch a statue of the Virgin Mary as Pope Francis delivers a prayer at the church of Our Lady of Madhu in Madhu, Sri Lanka,Wednesday, Jan. 14, 2015. AP PHOTO/L’OSSERVATORE ROMANO, POOL

Pope Francis was on the second day of a weeklong visit to Sri Lanka and the Philippines on Wednesday. Here are some glimpses of his trip as it unfolds:

Pope Francis made a last-minute change to his schedule late Wednesday to visit an important Buddhist temple in Sri Lanka’s capital, becoming only the second pontiff to visit a Buddhist place of worship after St. John Paul II paid his respects at a temple in Thailand in 1984.

Monks at the Agrashravaka Temple opened a casket containing important Buddhist relics, an event that usually only takes place once a year. The head monk at the temple, Banagala Upatissa, said opening the relics was “the highest honor and respect” they could show to the pontiff.—Nicole Winfield

Pope Francis isn’t afraid of a little rain, but a tropical storm is something else.

The Vatican spokesman, the Rev. Federico Lombardi, was asked Wednesday if Francis might alter his schedule in the Philippines as a result of a tropical storm brewing in the Pacific that is heading toward the eastern coast.

“We hope there is not a hurricane, that it is only rain,” Lombardi said. “If there is only rain, the pope has no fear of the rain—we see him in St. Peter’s Square, he is ready to be in the rain! We hope it is not a particularly hard situation, but we will see.”

Forecasters say the storm has maximum sustained winds of 65 kilometers (40 miles) per hour and higher gusts. It may not make landfall, but will come close to Tacloban on Leyte Island, where the pope is to meet with survivors of the 2013 Typhoon Haiyan.—Nicole Winfield

Sri Lanka’s holiest Christian site, the Our Lady of Madhu shrine, has a remarkable, centuries-long history as a place of refuge for Christians fleeing war and persecution.

Pope Francis traveled to the jungles of northern Sri Lanka to visit the shrine and pray before its statue of the Madonna, which is believed to hold miraculous healing powers.

During the 25-year civil war that wracked Sri Lanka, civilians sought refuge in the shrine, though in the war’s final months the villages surrounding Madhu emptied out as residents fled deeper into rebel territory to escape the government offensives. At one point, the priest in charge of the shrine fled for safety with the statue, but both returned.

On Wednesday, Francis cradled the statue in his arms.

“Let us ask that this shrine may always be a house of prayer and a haven of peace,” he said.—Nicole Winfield and Krishan Francis

In the north: EVERYONE IS CARRYING GRIEF

Pope Francis headed by helicopter to a well-known Catholic shrine in Madhu, a tiny town in Sri Lanka’s north that was often controlled by the Tamil Tiger rebels—and often a scene of violence—during the country’s 25-year civil war.

Mary Conseeta’s two teenage brothers were killed when their school bus hit a roadside bomb in 2008. Conseeta, now 22, escaped with a leg wound. Sri Lankan forces that secretly entered the rebel area were blamed for the attack.

“I have faced enormous losses,” Conseeta said. “Not only me, everyone who is here is carrying some form of grief. All I pray for is peace. I believe the holy father’s visit will be a remedy for our pain.”—Jayampathi Palipane

Sri Lanka’s Catholic bishops knew exactly what they wanted when asked what gift they’d like from Pope Francis to commemorate his visit: a high-quality replica of a 1694 decree issued by the king of Kandy—then an independent state on the island—saying he didn’t oppose the conversion to Christianity of Sinhalese Buddhists.

The decree was presented to Pope Leo XIII well over a century ago by the then-archbishop of Colombo. Now—amid increasingly loud demands by extremist Buddhists seeking an all-Buddhist Sri Lanka—the bishops wanted the decree crystalizing religious freedom back home.

According to a translation provided by the Vatican, the document from King Keerthi Sri Raja Singhe of Kandy declares that “it is not prohibited to those who wish among the multitude of Sinhalese to become Christians, and permits all the pastors of the same order to preach to those born in Sri Lanka and believers of the noble doctrine of Buddhism that some convert to Christianity.”

It adds that Christian ministers “are authorized to build churches where there are Christian faithful and to carry out whatever is necessary to promote their religion.”—Nicole Winfield

3 things to know about Joseph Vaz

Pope Francis canonized the Indian-born Joseph Vaz as Sri Lanka’s first saint during a Wednesday morning Mass in Colombo attended by more than a half million people.

— Vaz, a 17th-century missionary to Sri Lanka from what was then the Portuguese colony of Goa, sometimes worked in secret, dressing up as a laborer or beggar so he wouldn’t be arrested by the island’s hard-line Calvinist colonial rulers.

— Catholic tradition says Vaz miraculously brought rain to the independent kingdom of Kandy, in central and eastern Sri Lanka, during a major drought. As a result, Kandy’s king gave Vaz protection and allowed him to work there openly.

— The first calls to have Vaz made a saint came soon after he died, in 1711, in Kandy.—Tim Sullivan

In his words: Francis on Joseph Vaz

— Exemplary priest: “He teaches us how to go out to the peripheries, to make Jesus Christ everywhere known and loved.”

— Transcending religious divisions: “His example continues to inspire the Church in Sri Lanka today. (The Church) gladly and generously serves all members of society. She makes no distinction of race, creed, tribe, status or religion.”

— Missionary zeal: “I pray that, following the example of Saint Joseph Vaz, the Christians of this country may be confirmed in faith and make an ever greater contribution to peace, justice and reconciliation in Sri Lankan society.”—Ken Moritsugu

Mothers carried babies and young people helped elderly relatives as the last of thousands of people streamed onto Galle Face Green, the seaside park where Pope Francis was celebrating Mass on Wednesday morning. The crowds poured off buses and from the nearby railway station. Security was tight, and everyone had to walk the last few hundred meters, but the feel was festive, and taxi drivers were handing out free cups of tea.

Sure you could stay home and watch it all in comfort. But that, they said, could not capture the feel of being there in person.

“With today’s advanced technology, you can see him on television and on the Internet,” said Kolitha Fernando, a retired clerk from the hill town of Kandy. “But to see him with your naked eyes, that’s a great feeling and a privilege for a Catholic.”—Bharatha Mallawarachi

A saint for Sri Lanka—and India

The pope canonized Joseph Vaz as Sri Lanka’s first saint, but Vaz was actually born an Indian in 1651 in what was then the Portuguese colony of Goa.

Vaz spent 23 years ministering to the Catholic community in Sri Lanka, sometimes working in secret because of the threat of persecution by the island’s Dutch rulers, who were die-hard Calvinists.

Today, Goa is an Indian state famous for its centuries-old churches, beautiful beaches and hordes of tourists. Catholics still make up about one-quarter of Goa’s population of 1.5 million. Bells were to toll in the state’s churches and cathedrals at the time of Vaz’s canonization, Church officials said.

Manuel Ubaldo Dias, a Goa Church official, said prayers to commemorate the sainthood would also be held there on Jan. 16, the day traditionally celebrated in Vaz’s honor.

“This is a great day for us. Something we have been waiting for years,” Dias said.—Nirmala George

When Pope Francis canonized Sri Lanka’s first saint on Wednesday, he again proved he has little tolerance for pointless rules, skirting the Vatican’s normal saint-making regulations. While the Church traditionally requires two miracles for sainthood, the Vatican never confirmed a second attributed to the intercession of Vaz, who is credited with reviving Catholicism during anti-Catholic persecution by Dutch colonizers.

Rather, Francis simply signed off on a decision by the Vatican’s saint-making office that Vaz warranted canonization. It’s the same thing Francis did for a far better-known new saint, Pope John XXIII, and is a sign that he firmly believes the faithful need more models of holiness without the technical, time-consuming and costly process of confirming inexplicable miracles.—Nicole Winfield

Catholics make up slightly more than 6 percent of Sri Lanka’s population of 21 million, according to the government. They are by far the largest Christian denomination in the country. Other Christians make up just 1.3 percent of the population, which is mostly Buddhist.

Read Next
PH journalists in tears aboard plane: Touched by papal charism
EDITORS' PICK
How to lose a PH genius: Wesley So officially a US citizen
Every Filipino home can now be a smart home with realme TechLife
Nestlé Philippines’ ‘NESCAFÉ Plan’ bags Grand Anvil at PRSP 56th Anvil Awards
Smart reinforces superiority with best speed and mobile video experience in PH
New 3,045 COVID-19 cases push PH total active cases to 40,074
LTO’s P500-M deal for screws draws scrutiny
MOST READ
Robredo on Sara Duterte leading poll surveys: Why are Filipinos drawn to leadership of this kind?
How to lose a Filipino genius: Wesley So officially a US citizen
Duterte order to police, military on Reds: ‘Kill them all’
Kris Aquino dispels rumors on son Josh getting married, thanks Ogie Diaz for defending him
Don't miss out on the latest news and information.