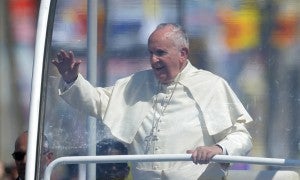 Pope Francis waves to people waiting to welcome him on the outskirts of Colombo, Sri Lanka on Tuesday. AP

MANILA, Philippines–Seven out of every 10 adult Filipinos have much trust in Pope Francis amid a slight improvement in weekly attendance at Catholic religious services in the last quarter of 2014, according to a Social Weather Stations (SWS) survey.

The poll released Wednesday also found improved trust ratings of the Pontiff in other major religions in the country.

SWS found that 72 percent of respondents had “much trust” in Pope Francis, while 12 percent had “little trust,” resulting in a net satisfaction rating (much trust minus little trust, rounded) of “very good” 59.

The latest poll yielded results similar to the survey conducted in September 2013, six months after then Buenos Aires Archbishop Jose Mario Cardinal Bergoglio was elected the Vicar of Christ, in which 71 percent trusted the Pope and 12 percent had little trust in him.

“The Catholic Pope has always been highly regarded by Filipinos,” SWS said, adding that the late Pope and now St. John Paul II, garnered the highest public trust in the history of SWS surveys.

The net rating of Pope John Paul II stood at “very good” 65 when SWS first conducted the survey in December 1994, a month before he went to the country for the second time to lead the first World Youth Day celebration in Asia.

The late Pope first embarked on an apostolic journey in the Philippines in February 1981 when he officiated the beatification rites for the first Filipino St. Lorenzo Ruiz de Manila and his 15 companions martyred in Nagasaki, Japan.

In May 2005, barely a month after then Pope Benedict XVI assumed the top post of the Roman Catholic Church, SWS recorded his only net trust rating at “very good” 58.

Pope Emeritus Benedict XVI resigned on Feb. 11, 2013, citing the physical and psychological strains of the papacy.

The poll also found that 41 percent of Catholics attended weekly religious services, a slight improvement from the 37 percent posted in the previous quarter.

In general, weekly religious attendance among Filipinos stood at 48 percent in December—the highest since February 2013—

The survey used face-to-face interviews with 1,800 adults nationwide and had a margin of error of plus-or-minus 2 percentage points for national percentages.–Inquirer Research