PH journalists in tears aboard plane: Touched by papal charism 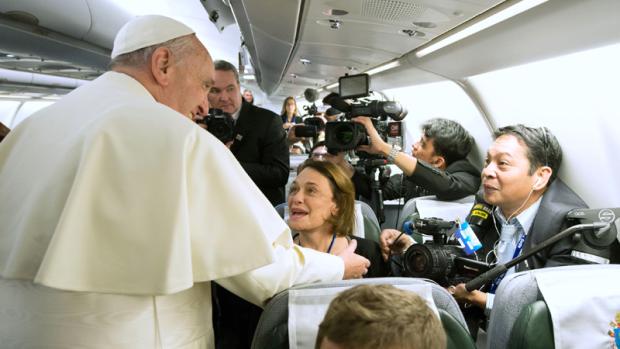 In this photo taken Monday, Jan. 12, 2015 and made available Tuesday, Jan. 13, 2015 Pope Francis, left, speaks to reporters en-route to Colombo, Sri Lanka, as he commence his Asian tour. The pontiff arrived in Sri Lanka Tuesday at the start of a weeklong Asian tour saying the island nation can’t fully heal from a quarter-century of ethnic civil war without pursuing truth for the injustices committed. (AP Photo/L’Osservatore Romano, pool)

COLOMBO, Sri Lanka—Lynx-eyed personnel of the Holy See Press Office put a wet blanket on Philippine journalists eager to score a scoop on the papal plane by saying all events that would transpire aboard would be regulated by the rule on embargo.

No press communication and transmission are allowed on all papal flights.

Only after disembarkation may journalists file their dispatches—after clearance from Vatican press officers.

Still, more than 70 journalists signed up for the long-haul flight from Rome to Asia and back on Jan. 12 to 19, only the Pope’s second trip to Asia after South Korea last August but the longest thus far of his barely two-year-old papacy.

The number did not include journalists who went ahead to Manila to wait for the papal arrival and do advancers in the meantime.

The trip back and forth would cover the air territory of at least 24 countries, including China’s. Plenty of time to get a scoop or a once-in-a-lifetime “Kodak moment” with His Holiness.

But it would also be a flight fraught with anxiety and stress.

“Buon viaggio,” Francis greeted the journalists as he appeared from behind the curtain separating the press section from the Vatican official section.

The greeting was delivered in his trademark soft but warm voice that despite the PA was barely audible because of the noise of the Airbus A330 engines and the nervous beating of the hearts of many of the journalists flying with the Pope for the first time.

It was perhaps because of the anxiety of covering the “People’s Pope” and his rather demanding itinerary that the journalists reacted with nervous laughter to Francis’ wry remark, “There’s a lot of work.”

We had been briefed about how Pope Francis would start each apostolic tour by walking to the seats of journalists and greeting them one by one.

It’s an effective way of keeping the journalists from mobbing the Pope and preventing pandemonium on the papal plane.

If all else failed, there would be the burly stewardesses of the plane guarding His Holiness, eager as well to greet him and be greeted by him.

The Pope made his rounds to greet the journalists from other countries, the faces of the Philippine journalists were red. Many of them, including men (and unabashedly all of the women, of course), were in tears. Everyone was touched by the Spirit.

Before the Pope’s general greeting, Fr. Federico Lombardi, SJ, the affable head of the Holy See Press Office, told him about the presence of a large number of Philippine journalists aboard.

“Something unique,” Father Lombardi told the Pope. “This time we have with us a good 14 Filipinos. This says something about the expectations from that country.”

“Yes, you will be mobbed by millions,” I overheard my seatmate said. He was a cameraman from French Catholic TV and he told me his bosses sent him “because of the Philippines, where millions will mob the Pope.”

Adding to our anxiety was the late notice from two French journalists that they were backing out because they had to cover the terrorist attacks in Paris.

Lombardi told the Pope that the two newspapers were Le Figaro and Le Monde, newspapers not exactly friendly to the Church but which had been sending its correspondents to Rome and papal tours because of the significant role that the Church plays in global affairs.

Praying to the Madonna

The security situation was in the mind of everyone so that this writer earlier asked Lombardi if the Pope had gone to St. Mary Major Basilica to pray to the Madonna since there were no reports on the matter from the Holy See Press Office. It is a practice he has observed and performed since becoming Pope.

The Pope did, Lombardi told me. He went Saturday evening when no one was there and he stayed for 20 minutes.

“Don’t worry,” Lombardi told me. “The Pope prayed to the Madonna for a safe trip, he always does that.”

But of course we were just as nervous about being greeted by the Pope.

And Pope Francis turned on the charm. Filipinos have a name for it from the Spaniards: “simpatico.” He was totally appealing. He smiled warmly and even laughed at times, especially to Vatican beat reporters with whom he seemed to share a private joke or two. But his laugh was never boisterous. It was gentle but infectious.

The papal gaze is a great weapon. Pope, now Saint, John Paul II had it: He seemed to look into your soul and the charm took its effect there.

Pope Emeritus Benedict XVI, shy and self-effacing, had a word from Augustinian theology that could be used to explain St. John Paul II’s charm: “interiority.”

Pope Francis has that sort of effect. When he nods looking at you, it’s as if he had recognized something in you. The smile, kind and quizzical, masks whatever discovery or recognition he might have made.

It is typical of papal encounters for the devotee to be dumbstruck and frozen, so this writer rehearsed a short greeting, the simpler the better. “Your Holiness,” I greeted him, “I am from the Philippines and we are greatly honored by your visit.”

He nodded, and to show how I as a Catholic recognized his spiritual paternity, nay his magisterial or teaching authority (and to pompously burnish my Catholic credentials), I took his hand and kissed it, at the same time looking for his papal ring. There was none.

It was only then that I realized that I had kissed the Pope’s right hand. I was on the right side of the plane and the Pope’s nearest hand was his right. His bishop’s ring was on his left.

The hand was fleshly white, with a hint of sallow but sunny grandeur in it, the feel of Raphael’s Renaissance Madonna, except that this was a man’s hand, tender but firm.

But other journalists were also able to procure their own “relics.”

Pia Hontiveros asked that her rosaries be blessed, and the Pope obliged, putting his hand on the sacramental items and taking the time to say the traditional formula of blessing.

TV 5’s Torres gave him a letter from a kid with a degenerative disease and the Pope accepted it, nodding his head to give assurance that he would read it.

And RTVM’s Bombase asked the Pope to bless his family. The Pope placed his hand on the TV man’s face and intoned the blessing.

The Pope’s charm had become a charism. And there could never be a press embargo on that.