‘You haven’t seen nothing yet; wait till you get to PH’ 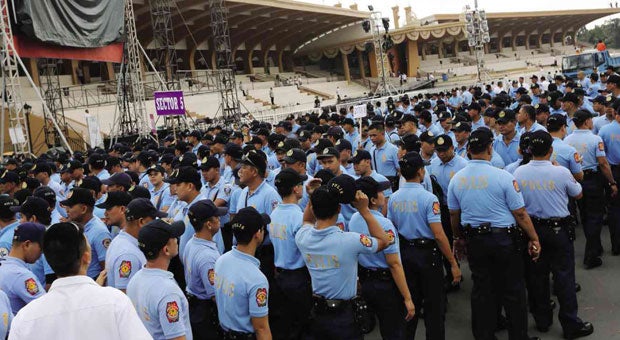 PAPAL RING OF SECURITY Policemen wait for instructions at the Quirino Grandstand during the final rehearsal for one of the events to be graced by Pope Francis who is arriving in Manila Thursday with a warning from his Vatican aides: “You haven’t seen anything yet. Wait till you get to the Philippines.” The Pope will say Mass in Rizal Park on Sunday, Jan. 18. JOAN BONDOC

COLOMBO, Sri Lanka—Showered with admiration by both Christian and non-Christian Sri Lankans who came by the tens of thousands to see him declare their first saint, Pope Francis flies to the Philippines Thursday with a warning from his Vatican aides: “You haven’t seen anything yet. Wait till you get to the Philippines.”

That in a nutshell is the message of his press handlers. “Ah, the Philippines,” said the Vatican’s spokesman, Fr. Federico Lombardi. “Of course, of course, Filipinos will welcome the Pope by the millions.”

Alic Bonneton of French Catholic Television said the station was covering the second Asian tour of the Pope because of the high media anticipation about the Philippines. “Millions will turn out for the Pope there,” he said.

Papal fever has been further fanned in the Philippines following the highly successful Mass the Pope celebrated here on Wednesday to canonize Joseph Vaz, an Oratorian priest from Goa, India, who rebuilt the Catholic Church in Sri Lanka during the 17th century amid persecution by the Calvinist Dutch.

The Mass on the beach of Galle Face in Colombo surprised everyone, even Church and state authorities, because of the size of the crowd.

Buddhist Sinhalese are the majority in Sri Lanka, with the Hindu Tamils a sizable minority. The Muslims make up 10 percent of the population.

As early as 4 a.m. Sri Lankans from all walks of life and across all religions and languages were marching to the picturesque and pleasant waterfront where a pavilion with Buddhist and Christian design elements had been set up for the canonization ceremony.

Many of the people attending the event said they lined up Colombo’s streets the day before to welcome the Pope.

On Tuesday, when the Pope arrived, he was cheered all through his motorcade route.

He admitted the Pope was visibly tired after the long ride under the hot sun, so he canceled his meeting with the Sri Lankan bishops.

But speculations about the Pope’s health were quashed when he appeared for the canonization Mass on Wednesday, smiling and waving at everyone.

At one time he was introduced to the elderly on wheelchairs whom he greeted and blessed.

During the Mass, the intercultural dimension of the pastoral visit was driven home when parts of the largely English Mass were said in Sinhala and Tamil.

Imprisoned at one time by the Dutch who accused him of being a Portuguese spy, Vaz struggled to rebuild the Church. The King of Kandy in Jaffna also imprisoned him but was later touched by his kindness and charity.

Amid a particularly pernicious drought, Vaz prayed for rain and suddenly rain came. He also set up a clinic to treat the sick, and he ministered to everyone regardless of race or creed.

During a smallpox epidemic, Vaz’s ministry helped and healed everyone.

As a result, the Kandy king issued an edict allowing Catholic missionaries to evangelize and Buddhists to convert to Christianity.

A replica of the edict issued by the king was handed over to the bishops’ conference in Colombo. From the Vatican, the “Sannas” is a late 17th-century copper engraving issued by King Keerthai Sri Rajasinghe of Kandy permitting the preaching of Christianity and allowing Sinhalese to convert.

The Pope held up new Saint Joseph Vaz as an interreligious missionary. “His undivided love for God opened him to love for his neighbor; he ministered to those in need whoever and wherever they are,” he said.

“His example continues to inspire the Church in Sri Lanka today. She gladly and generously serves all members of society. She makes no distinction of race, creed, tribe, status or religion in the service that she provides through her schools, hospitals, clinics, and many other charitable works.”

The Pope emphasized that for the Church to continue its social ministry, it must be allowed to do so by authorities.

“All she asks for is the freedom to carry our this mission,” Francis said. “Each individual must be free, alone or in association with others, to seek the truth, and to openly express his or her convictions, free from intimidation and external compulsion.”

The Pope likewise urged the Sri Lankan Church to preach and evangelize in the context of diversity. “St Joseph Vaz knew how to offer the truth and beauty of the Gospel in a multireligious context,” he said.

During the Offertory, a particularly touching gesture was the donation given by the Church in Sri Lanka to the Pope.

Fr. Samantha Korera of the Archdiocese of Colombo said donations were collected from the 12 dioceses of the Sri Lanka Church. The donation, converted to euro, would go to “the Pope’s charities,” he said.

The Mass was so successful that Cardinal Malcolm Ranjith, Archbishop of Colombo, declared Sri Lankans “admirers” of the Pope.

“I must say that joining the millions of your admirers in the world, our own people, Sri Lankans of every religion, race and social color, have welcomed your pastoral visit to our little island home with deep respect and love,” Ranjith said.

The Pope visited the Shrine of Our Lady of the Rosary in Madhu in the afternoon and urged interracial harmony in Sri Lanka, still recovering from the scar of the Tamil insurgency that was crushed in 2009.

“We want to ask Mother Mary to accompany with her prayers the efforts of Sri Lankans from both Tamil and Sinhalese communities to rebuild the unity which was lost,” the Pope said.

Before leaving for Manila on Thursday, the Pope will pray in another Marian shrine, the Shrine of Lanka in Colombo, where he’s expected again to ask for the Blessed Mother’s intercession to heal the wounds of conflict in Sri Lanka.

The successful papal trip was attributed to excitement over the new government of President Maithripala Sirisena who was sworn in only last Friday.

The papal visit was seen as an occasion for national unity. The Pope called for Sri Lankan unity when he arrived Wednesday while Sirisena asked him to give the people his blessing.

The Pope will board a Sri Lankan Airlines flight at 9 a.m., local time, Thursday and arrive in Manila at 5:45 p.m., Philippine time.

The last papal visit to the Philippines was in 1995 when Pope, now Saint, John Paul II held a Mass at the conclusion of World Youth Day celebrations that drew 5 million people, the biggest crowd in history according to the Guinness Book of World Records.