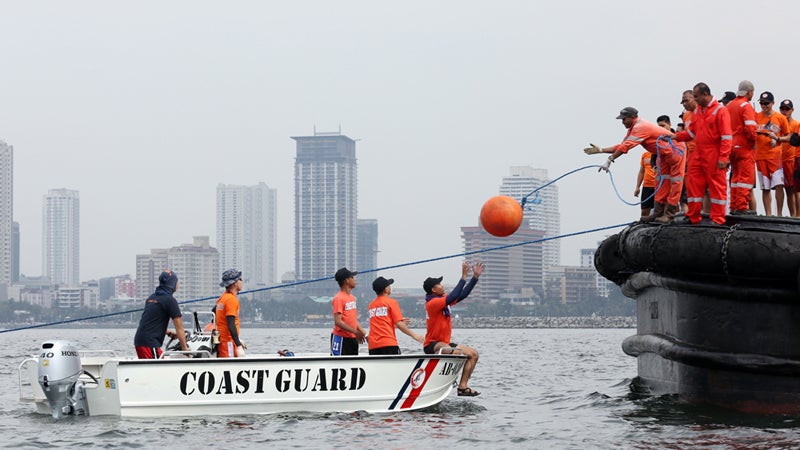 CATCH! Philippine Coast Guard personnel put a floating boom on Manila Bay on Tuesday as part of security preparations for the visit of Pope Francis starting tomorrow, Jan. 15, until Jan. 19. The floating boom will prevent ships and boats from entering the Manila Bay perimeter during the papal visit. NIÑO JESUS ORBETA

MANILA, Philippines–“We will be like the Germans and the Japanese.”

Such was the reminder given by President Aquino to government and Church organizers, impressing upon them the stringent security measures to be implemented for the visit of Pope Francis this week.

The President, who has taken a hands-on approach in the security preparations, issued the statement in last week’s meeting with Church officials, led by Manila Archbishop Luis Antonio Cardinal Tagle, in Malacañang, the Inquirer has learned.

Communications Secretary Herminio Coloma Jr. dismissed the idea that the President’s attendance would pose a bigger security risk. “Let us trust the decision of our President.”

Aquino on Monday went on national TV seeking the public’s cooperation to help ensure the safety of Francis.

“Do we want the Philippines to go down in history as the country where a tragedy involving the Holy Father took place?” he asked. “It’s the government’s obligation to ensure your safety and for us to do this, you also have an obligation.”

Aquino said there was no “direct threat” on the life of Francis during his visit here. But he said the government was “touching base” with the Interpol and its Southeast Asian neighbors to “identify any threat whatsoever coming from any direction.”

The President said the government had “accommodated” many of the arrangements sought by organizers from the local Catholic hierarchy, but “asked that we be allowed to do our job.”

Francis is arriving in the country both on a state and an apostolic visit, meaning both the Philippine government and the Church were playing host.

Aquino said the government side preferred an enclosed “popemobile” for Francis’ motorcades. But he said it acceded when told that the Pope—known for preaching in the slums of Buenos Aires and mingling with the masses—wanted to “listen to those who would come to greet him.”

In Palo, Leyte province, where Francis is set to have lunch with around 30 typhoon survivors, Aquino said the government asked for their names to “at least conduct a background check.”

“For the Holy Father’s visit to be meaningful, we need bayanihan and to help one another,” he said in his address.

“Clearly, this visit by Pope Francis poses a big challenge to our country. On the line here is his safety and those of so many people who would to join his activities and who would want to see him.”

Wary of stampedes, the President showed a footage in one of St. John Paul II’s motorcades in the Philippines where the crowd, hitherto calm, suddenly breached the fences once the papal convoy got close.

Aquino also cited the assassination attempt against John Paul II at the Vatican in 1981, and separate instances when someone lunged at Pope Benedict XVI during Mass and when the crowd swarmed his vehicle.

“Even without the threat of terrorism, there is always danger in big gatherings, especially if someone intends to start trouble,” he warned.

In Lucena City, Maj. Gen. Ricardo Visaya said on Tuesday 400 soldiers from the Southern Luzon Command (Solcom) had been dispatched to the Bicol region and Tacloban to secure the Pope and pilgrims traveling overland.

The Solcom chief said a Navy vessel would also be posted at the Matnog port in Sorsogon province while additional UH-1H helicopters will be on standby in Legazpi City to coordinate with the Philippine National Police and the Coast Guard.–With a report from Delfin T. Mallari Jr., Inquirer Southern Luzon