All you need to know about the papal visit

MANILA, Philippines – Pope Francis arrived in Colombo, Sri Lanka on Tuesday morning, on the first leg of his second visit to Asia. He will arrive in Manila on Thursday, at 5:45 p.m. INQUIRER.net compiled a list of frequently asked questions regarding Pope Francis’ visit to the Philippines as well as previous papal visits of Pope Paul VI and Pope John Paul II.

1. What is the purpose of Pope Francis’ Apostolic Visit?

The main purpose of the Pope’s visit is to be with the victims of Supertyphoon “Yolanda” (international name: Haiyan), the strongest typhoon in history to make landfall. He has also in the past said he would like to visit Asia because his predecessor, Pope Benedict XVI, never got to, because of health reasons. He visited South Korea last August.

2. Why the theme ‘Mercy and Compassion’?

According to Manila Archbishop Luis Antonio Cardinal Tagle, mercy and compassion commonly figure in Pope Francis’ teachings, homilies and actions. The Pope has also called on the faithful to practice these traits when interacting with the poor and in need.

3. Will there be work or classes during the papal visit?

Jan. 15, 16 and 19 have been declared special nonworking holidays in the National Capital Region to give the public more opportunity to participate in the papal visit.

4. What Masses and other events are open to the public?

Most events may be attended by the public via big screens to be set up outside, but certain groups will be given priority in designated events. No tickets are needed.

5. What should we expect from the Mass at Quirino Grandstand? 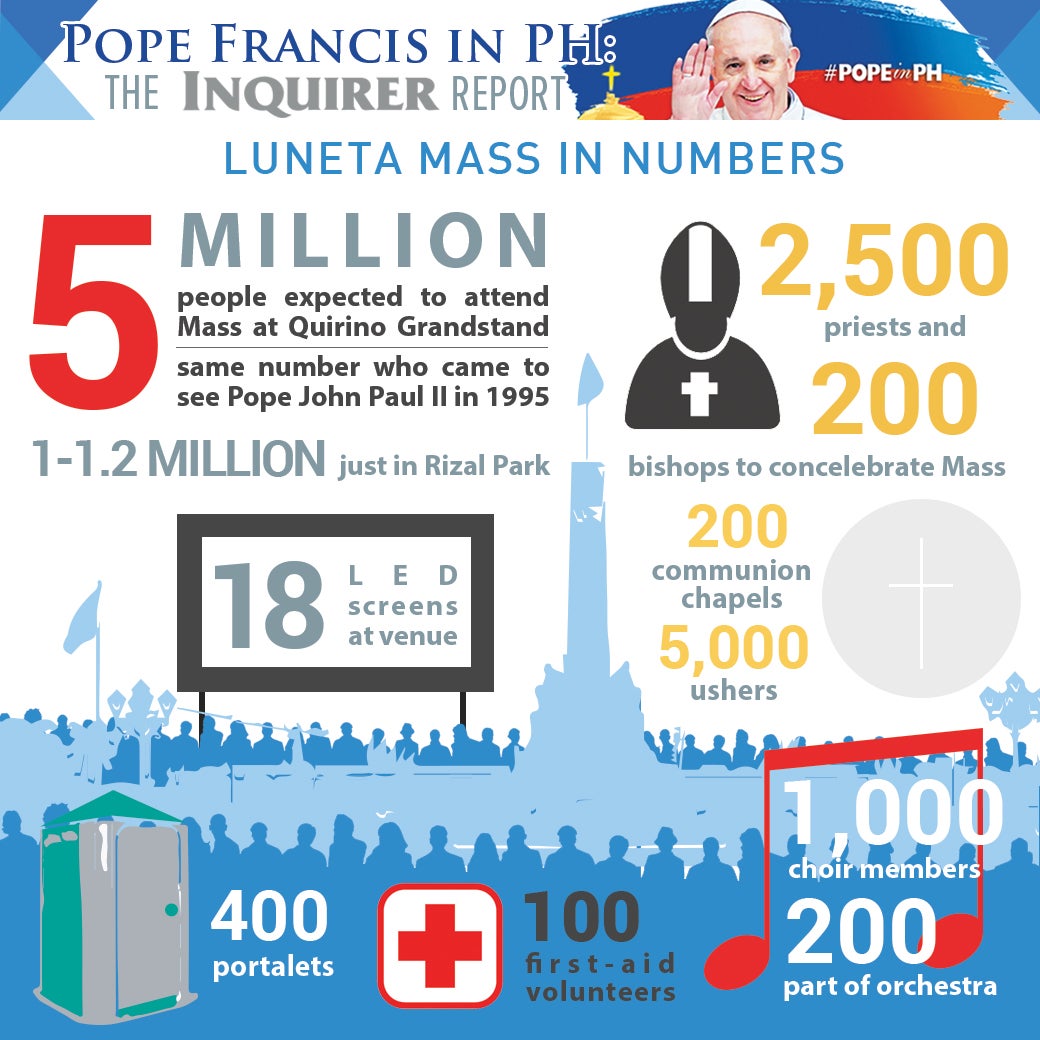 6. Will the Masses and addresses all be in English?

Majority of the Pope’s Masses and addresses will be in English so as to reach more people. Only the Mass at Manila Cathedral will be in Latin, as the main attendees are bishops and preselected members of the dioceses, who are expected to understand Latin. In all events, however, the Pope could make off-the-cuff remarks in either Italian or Spanish, the languages he is most comfortable with. In South Korea last year, however, Pope Francis also offered impromptu remarks in English.

7. Where will the Pope stay while in the Philippines?

As in the past, the Apostolic Nunciature on Taft Avenue, Manila, is the official quarters of all visitors from the Vatican.

8. Where will the Pope’s motorcade pass?

9. What is the Popemobile for the Philippine visit?

Three Popemobiles have been prepared for the papal visit: one for Manila, one for Tacloban City and one backup vehicle.

In Manila, Pope Francis will ride in a white converted jeepney, the most common form of public transport in the Philippines. Some of its unique features include a secure, elevated platform to give the Pope a better view of the public, open windows and, found at each side of the jeep, glass crosses made by renowned sculptor Randy Orlina.

The vehicle to be used in Tacloban is the same Korean-made vehicle from World Youth Day in South Korea.

10. What should we do, wear or bring during the papal events? 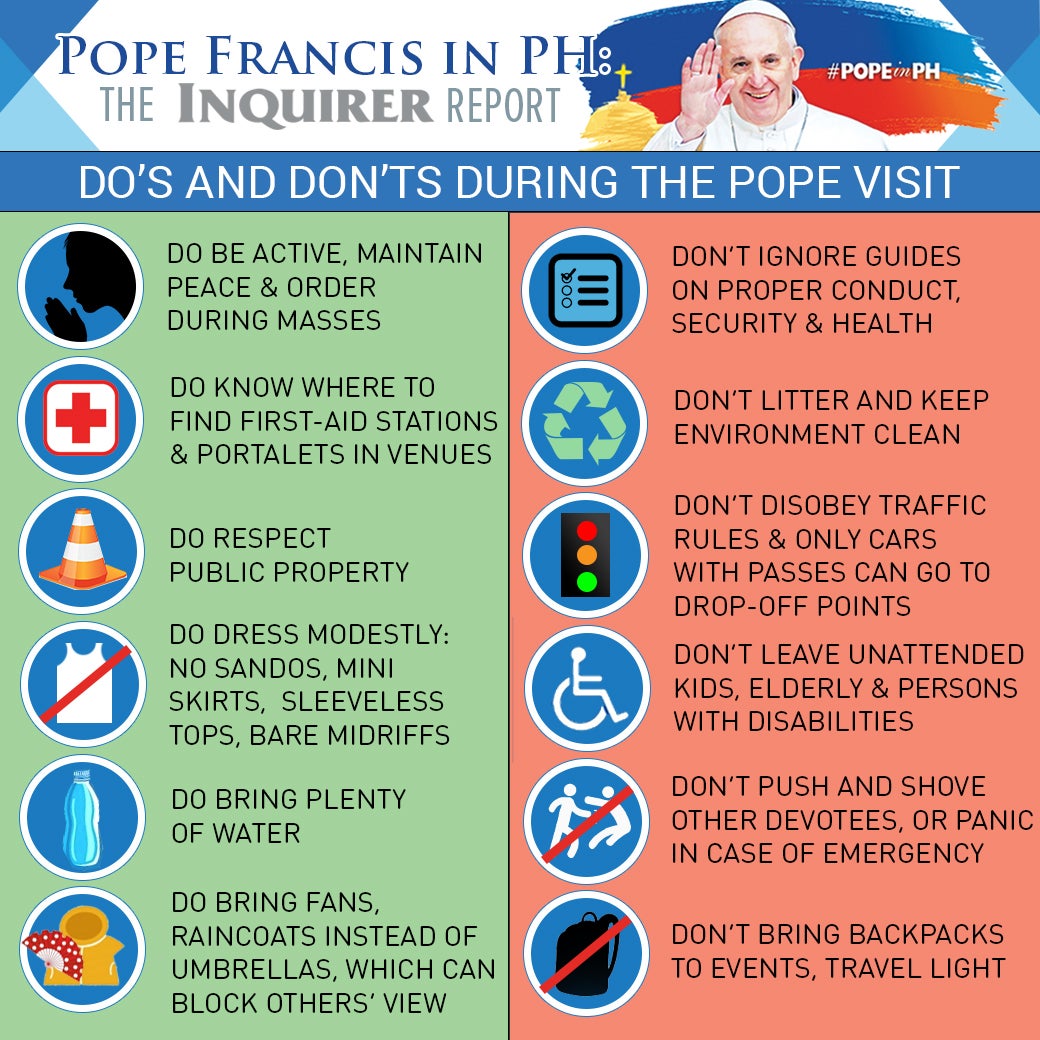 11. Is it true that some flights have been canceled due to the papal visit?

Around 423 international and domestic flights scheduled between 2 p.m. to 7 p.m. on Jan. 15 and between 6 a.m. to 10:30 a.m. on Jan. 19 at Ninoy Aquino International Airport have been canceled to make way for the papal visit.

12. Does this also mean that roads to and from Naia will also be closed?

The whole stretch of Sales Avenue to Andrews Avenue, Domestic Road to Park and Fly, and MIA Road going to Roxas Boulevard will be closed from 3 p.m. to 7 p.m. on Jan. 15 and from 7 a.m. to 10 a.m. on Jan. 16. Some Naia terminals will be accessible only via South Superhighway through Bicutan, Alabang and Sucat Road.

Quirino Grandstand will also be closed from when the Pope arrives until 6 a.m., Jan. 18.

1. How many popes have visited the Philippines?

Two popes have visited the country thrice. Pope Paul VI visited the Philippines in 1970 and Pope John Paul II visited in 1981 and 1995.

Read the details of their visits here:

2. Why didn’t Pope Benedict XVI visit the Philippines during his term?

The previous Pontiff said his health prevented him from traveling for long hours. His health was also the reason behind his decision to step down from the papacy in 2013.