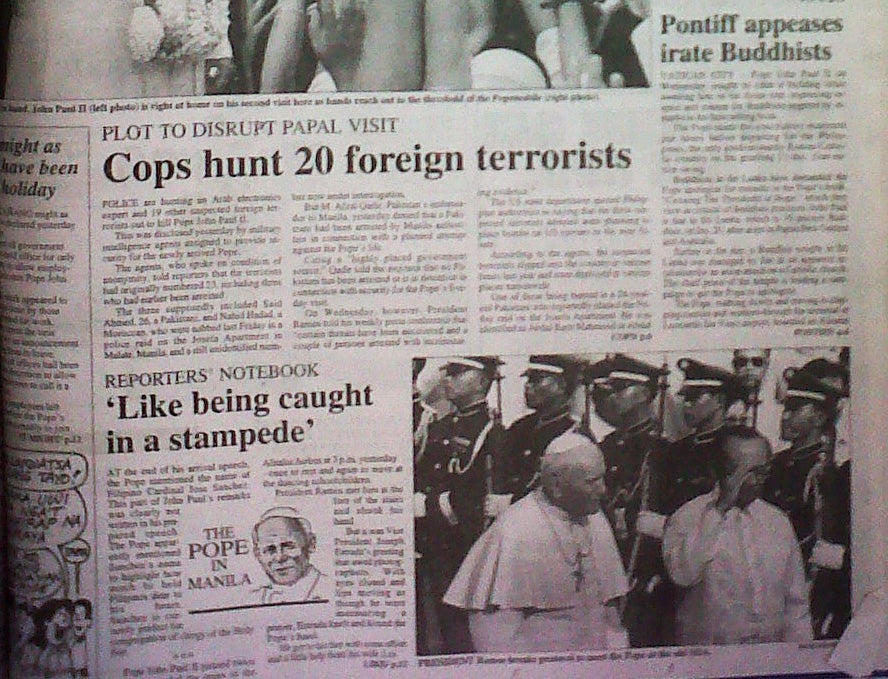 * * * At the end of his arrival speech, the Pope mentioned the name of Filipino Cardinal Jose Sanchez.

This part of John Paul’s remarks was clearly not written in his prepared speech.

The Pope apparently mentioned Sanchez’s name to highlight how much he held Filipinos dear to his heart.

Sanchez is currently prefect for congregation of clergy of the Holy See.

* * * Pope John Paul II paused twice as he descended the stairs of the Alitalia Airbus at 3 p.m. yesterday — once to rest and again to wave at the dancing schoolchildren.

President Ramos met him at the foot of the stairs and shook his hand.

But it was Vice President Joseph Estrada’s greeting that awed photographers.

With eyes closed and lips moving as though he were murmuring a prayer, Estrada knelt and kissed the Pope’s hand.

He got to his feet with some effort and a little help from his wife, Loi.

* * * First Lady Amelita Ramos and Manila Archbishop Jaime Cardinal Sin stood side by side as the Pope’s plane taxied to a stop. But they ignored one another.

* * * Face to face with the Pope, Speaker Jose de Venecia made as though he were in the presence of a venerated statue.

Bending down, he kissed the Pope’s ring and rubbed a huge white handkerchief against the papal knuckles. His wife, Gina, did the same.

Comment from an observer: Plain folks wipe only statues of Jesus and the saints.

The rich do it on living beings, including the Vicar of Christ.

* * * The Popemobile turned right to Quirino Avenue from Roxas Boulevard at around 4:35 p.m. to the frenzied cheers of the crowd and the loud staccato of an Ati-atihan drum band.

“Tisoy pala siya, ‘no?” said a T-shirt vendor of the Pope, whose plump, reddened cheeks could be seen clearly through the thick glass.

The Popemobile ran at a clip of about 7.5 kilometers per hour.

Riding like stuntmen on the Pajero’s running board, Lim and Atienza waved the crowd away from the middle of the road to make room for the Popemobile which was only three vehicles behind.

After about 15 minutes, the President’s limousine passed through Quirino Avenue, with members of the PSG jogging alongside. Mr. Ramos waved and smiled at what was left of the dispersing crowd.

* * * Emblazoned on the Popemobile’s white roof were the names of its makers.

Proudly Filipino, yes, but obviously ruined by the blatant display of commerce. Vulgar, too.

* * * Insp. Victorino Mariano of the Western Police District Command emerged from crowd-control operations with scratches on his arms.

It was, to judge from his and his colleagues’ experience, like being caught in the middle of a stampede.

His colleagues had their own tales to tell about how they were able to hold back the surging crowd.

* * * It’s a long way from Bolinao, Pangasinan, especially if you’re making the trip at dawn on an 18-speed bicycle.

But not for farmer Abe Cruz, 32, who left his hometown at 3 a.m. yesterday and hit the Manila North Expressway toll gate at 1 p.m. “I want to see the Pope,” said Cruz, who travelled alone.

“That’s what I had in mind when I was on the road. I just focused on that.”

Asked why he chose to make the high-risk, 10-hour trip, Cruz offered an odd smile and said: “I’m a widower. I have to do this to take my mind away from my wife.”

Cruz is making a debut at this year’s Marlboro Tour, representing Northern Pangasinan.

* * * The Pope’s welcomers were perched on trees, waiting sheds, walls and any other elevated structure which might be able to hold their weight.

Those atop rooftops waved banners bearing messages like “Long Live the Pope” and “Totus Tuus.”

Citing a cardinal, Lim said the crowd of welcomers was double that which turned out to greet the Pope in 1981.

* * * There were also about 1,500 spectators who packed the Light Rail Transit Quirino station.

The rest of the crowd, particularly the elderly and some nuns, contented themselves with standing atop cars and jeepneys parked farther north of Taft Avenue.

LRT operations were suspended at the time of the Pope’s arrival, resuming after he had settled at the Apostolic Nunciature.

The portion of the LRT line situated right across from the Nunciature was boarded-up to keep off curious onlookers.

The crowd took over the two-meter island along the 1.5-km Quirino Avenue and wildly waved yellow and white flaglets when the Pope passed by.

And on the main road itself, people filled every inch — about eight-deep on each side — leaving a mere one-meter space open on the westbound lane for passage of the Pope’s entourage.

* * * An elderly woman missed what she had come for as early as 10 a.m. when she collapsed due to the heat and had to be brought to a nearby ambulance from the East Avenue Medical Center.

A young man dressed in a striped shirt tried to take advantage of the attention being directed at the Pope and snatched the bag of a female staffer of the Ospital ng Maynila.

But brave as he was to pull off the heist amid such a thick crowd, he was also wise enough to just drop the bag as a bunch of Ospital ng Maynila staffers gave chase.

* * * Police Officers 3 Sergio Macaraeg and Wilson Gamit were at their post at the corner of Quirino Avenue and Roxas Boulevard as early as 6 a.m., but neither was willing to knock off early.

“Aside from this being our job, it is an honor for us to serve as security for the Pope. This comes only once in a lifetime,” said Macaraeg, who is from the WPD. Gamit is from the Central Police District.