NUJP on Paris attack: ‘No mode of expression deserves death’ 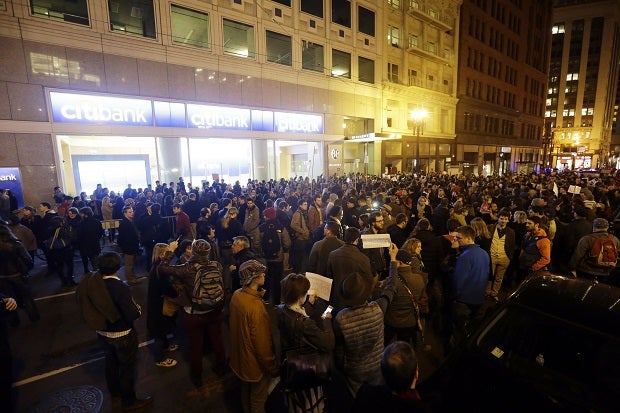 A crowd gathers outside of the French Consulate during a gathering in solidarity with those killed in an attack at the Paris offices of the weekly newspaper Charlie Hebdo on Wednesday, Jan. 7, 2015, in San Francisco. AP

MANILA, Philippines—The National Union of Journalists of the Philippines (NUJP) on Thursday denounced the attack on French satirical magazine Charlie Hebdo which killed 12 people, including 10 journalists, and wounded 11 others.

The attack underscored intolerance as “a bane to freedom of expression and of the press,” NUJP chairperson Rowena Paraan said.

Paraan said the attack on the French weekly is akin to assaults directed to Filipino journalists.

“The attack on Charlie Hebdo, the targeted killings of journalists, which have claimed more than 170 lives in the Philippines since 1986, the worsening attempts to muzzle whistleblowers and reporters who bring to light corruption and the dark workings of state security, are all cut from the same mold,” Paraan said in a statement.

The magazine, known for its controversial content, earned the ire of Muslim extremists for publishing satire cartoons of the Prophet Muhammad.

According to a CNN report quoting an Islamic Studies expert, Muslims are prohibited from depicting any likeness of the prophet to avoid idol worship.

While the attack at Charlie Hebdo sparked debates on ethics, NUJP said that no mode of expression should warrant a death sentence.

“We acknowledge that there have been and will continue to be debates about the role journalistic responsibility–or lack of it–factors into such attacks on the freedom of the press. But while we acknowledge the indispensability of ethics in the profession, we also maintain that no mode of expression, however offensive or unethical it may be, deserves a death sentence,” Paraan said.

French President Francois Hollande called the assault on the magazine a terrorist attack.

A video of the incident showed the gunmen shouting “Allahu Akbar,” Arabic for “God is good” while firing shots.

An 18-year-old suspect in the Charlie Hebdo attack has since surrendered to the French police.