MANILA, Philippines—Senator Ferdinand “Bongbong” Marcos on Thursday said he is among the millions of Filipinos waiting for Pope Francis’ visit to the Philippines next week even if he, his wife and their son had already previously met him during their visit in Rome in July last year.

“He’s a rock star. Iba ang dating talaga (he has this different appeal)…,” Marcos said during a regular forum at the Senate.

He said his son even forgot to remove his shades when he faced the Pope.

“I forgot!” the senator said, quoting his son.

“Star-struck kaming lahat (we were all star-struck),” he added. 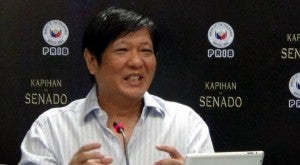 During that short meeting, the senator said, he managed to thank the Pope for his “lessons of humility.”

“When I saw him in Rome, nagpasalamat ako e. ‘Thank you for reminding us with your lessons of humility’ dahil the thing that this Pope teaches us is humility,” he said.

(When I saw him in Rome, I thanked him. ‘Thank you for reminding us with your lessons of humility’ because the thing that this Pope teaches us humility.)

(You know what he told me? Instead of saying ‘I’ll pray for you,’ he told me to pray for him…)

When he told the Pope that he is from the Philippines, Marcos said the Pope then blurted the words “Enero, I’m coming in January.”

But because they were star-struck, the senator said they were not able to give the Pope a beautiful message that they had prepared for him.

Marcos said Pope Francis was different from other popes that he had met during the time of his father, the late dictator Ferdinand Marcos.

(Ever since my father became president, my mother would always let me join her in an audience with the Pope. That’s why I became a good man—because I was influenced by the highest priests of the land.)

Marcos said that on Jan. 16, he would go to Tacloban to welcome the Pope and if given a chance to meet him, he said he would thank him for giving attention to the victims of Supertyphoon Yolanda.

The Pope is set to visit Leyte on January 17 and meet with some Yolanda victims.