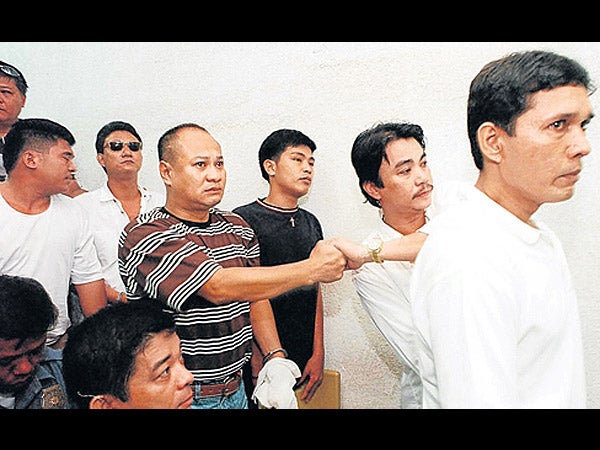 Tension is writ all over the faces of the five accused in the killing of former PC Colonel and Ilocos Norte Vice Gov. Rolando Abadilla as they await the promulgation of the case by Judge Jaime Salazar on Aug. 11, 1999, in Quezon City. The judge found the five guilty but they have steadfastly professed innocence. INQUIRER FILE PHOTO

MANILA, Philippines–Philippine Jury Campaign (Philjury) has written to Pope Francis requesting him to intercede on behalf of the so-called Abadilla 5 and ask President Aquino to release them.

Relatives of desaparecidos, political prisoners and victims of extrajudicial killings are also writing letters to the Pope to ask him for help in their pursuit of justice.

Pope Francis will arrive in Manila on Jan. 15 for a five-day apostolic visit to the Philippines. He will meet with President Aquino in Malacañang on Jan. 16.

The London-based Philjury told the Pope that the five men—Lenido Lumanog, Augusto Santos, Cesar Fortuna, Joel de Jesus and Rameses de Jesus—convicted of the 1996 killing of former Col. Rolando Abadilla had been in jail and “fighting for their innocence for 18 years.”

Philjury said the Board of Pardons and Parole recommended their release in 2011, and then the Department of Justice (DOJ) recommended conditional pardon for them in 2012.

“Three years have passed, these victims of injustices are still languishing in the maximum security at the Philippine New Bilibid Prison awaiting order from President Aquino for their release,” Philjury chair Timoteo Sapurco and executive director Amyliza Balliao said in their Jan. 5 letter to the Pope.

One of the five, Lumanog, is a patient at the National Kidney and Transplant Institute (NKTI), they said.

“Your Holiness, please forgive us for this intrusion, but we beg for your intercession with President Aquino on your visit to the President. May your presence soften his heart to have mercy and compassion to release these innocent people,” they said.

Philjury e-mailed a copy of the letter to the Inquirer.

Lumanog and Santos had authorized Philjury to file a communication in the United Nations seeking a decision on the continued detention of the Abadilla 5 despite the recommendations from the DOJ and the pardons board.

In December, Lumanog and Santos, through Philjury, filed a complaint against the government in the office of the UN High Commissioner on Human Rights, asserting their rights to life and liberty were being violated by keeping them in jail for 18 years.

The pardons board recommended the commutation of their sentence in November 2011, but Justice Secretary Leila de Lima recommended conditional pardon or executive clemency for them in 2012.

In February 2011, the Supreme Court affirmed the Court of Appeals’ ruling upholding the lower court’s conviction of the five men who became collectively known as Abadilla 5.

The five men claimed they were innocent and accused their police captors of torturing them into admitting the crime.

Abadilla, who headed the dreaded Metrocom Intelligence and Security Group that tortured political prisoners during the Marcos dictatorial regime, was shot dead while his car was stuck in traffic on Katipunan Avenue in Quezon City, on June 13, 1996.

Lumanog, who suffered kidney failure while in prison and had a kidney transplant in 2003, has been confined at NKTI since April 2012.

Rameses de Jesus is now at the Sablayan Penal Colony in Occidental Mindoro province. The rest are held at New Bilibid Prison in Muntinlupa City.

“Your Holiness, your trip to [the] Philippines on a mercy and compassion mission will bring hope and light not only to the victims of Typhoon Haiyan [Yolanda] but also to the victims of miscarriage of justice,” Philjury said in its letter to the Pope.

On Monday, activist priest Robert Reyes appealed to the President to grant clemency to the Abadilla 5 during the Pope’s visit, saying the visit should be an “occasion for real clemency and mercy.”

Apart from Philjury and Reyes, the CBCP, the Volunteers against Crime and Corruption, Friends of Abadilla 5, and Asian Human Rights have also appealed to the President to order the release of the five men.

At the office of rights group Karapatan on Wednesday, Marita Cadano, mother of Guiller Martin Cadano, was writing a letter to Pope Francis asking him for help in obtaining the release of her son, who was arrested in Carranglan town, Nueva Ecija province, on Aug. 9, 2014, for illegal possession of firearms and explosives.

Cadano, a coordinator for Kabataan party-list group in Central Luzon, was arrested together with Gerald Salonga, an organizer for the group. They are detained in San Jose City Jail in Nueva Ecija.

Niki Gamara was also writing to the Pope to seek help for her father, Renante Gamara, a consultant to the communist National Democratic Front of the Philippines (NDFP), who was arrested in 2012 on charges of kidnapping with murder.

Karapatan secretary general Cristina Palabay said she hoped the Pope could spare an hour to visit political prisoners or hear the cries of their families and relatives.

Gamara said she hoped Pope Francis would intercede for even one or two Filipino political prisoners the way he interceded with Cuban President Raul Castro for the release from Cuban jail of American aid worker Alan Gross and of five Cuban prisoners from US jails in December.

Cadano said her son, a graduate of the University of the Philippines, wanted to work for a master’s degree and be a teacher, but decided to help the poor first.

She did not explain what her son did, but said he was arrested without a warrant.

Gamara said her father was a political detainee like other members of people’s organizations, progressive or activist groups who had been jailed.

“A lot of mothers, fathers, children, siblings, wives and husbands were separated from their families because like my father, they thought of ways to make this country a better place for the future of their children and grandchildren,” Gamara said.

Palabay said she hoped to relay the letters to a bishop who could hand them to the Pope.

“Violation of human rights is an issue that is very much neglected and disregarded by the Aquino administration,” she said.

She said she believed the Pope could relate to the human rights victims in the Philippines.

“He has directly experienced the pain of being under military dictatorship in Argentina,” she said.

Tired of waiting for pardon, ‘Abadilla 5’ take case to UN