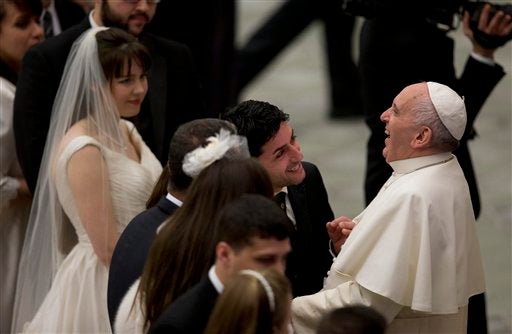 Pope Francis, right, meets with faithful at the end of his weekly general audience in the Paul VI hall at the Vatican, Wednesday, Jan. 7, 2015. AP

VATICAN CITY — Pope Francis’ upcoming trip to Sri Lanka and the Philippines is shaping up as an all-English affair.

The Argentine pope plans to deliver all 11 speeches and homilies in English in a major break from his Italian and occasional Spanish norm.

Francis tried out his English a few times during his pilgrimage to South Korea last summer. The Vatican said at the time that the try-out was such a success — Francis even managed to crack jokes off-the-cuff in English — that he would use it more during his second Asian foray.

Francis arrives in Sri Lanka Jan. 13 for a two-day visit heavy on calls for reconciliation after the country’s quarter-century civil war. He then flies to the Philippines on Jan. 15 to visit the region hit hard by Typhoon Haiyan. He returns to Rome Jan. 19.

Vatican spokesman the Rev. Federico Lombardi said Wednesday that five separate open-air popemobiles would be used during the trip. Francis has eschewed the covered, bullet-proof popemobiles that his predecessors used overseas in favor of open-topped vehicles that he can easily get down from to greet the crowds.

While Francis isn’t expected to make any major overtures to China during his trip, he will once again fly through Chinese airspace, giving him the opportunity of sending a new greeting to President Xi Jinping. Vatican protocol calls for such telegrams of greeting for each country the pope flies over.

Francis sent an initial telegram to Xi on Aug. 14 when he flew through Chinese airspace en route to South Korea. It represented a new step in the Vatican’s delicate diplomatic dance with China, which severed relations with the Holy See in 1951 when the Communists took over. Beijing had refused to let St. John Paul II’s plane fly overhead when he last visited the Far East in 1989.