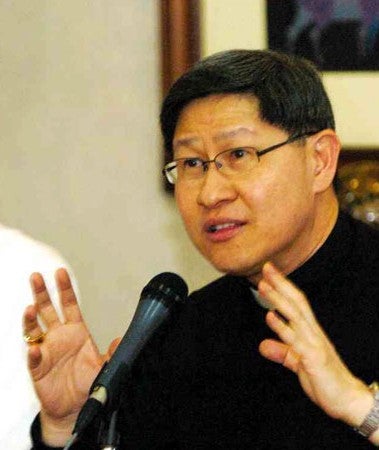 Various organizations of the elderly on Monday appealed to Manila Archbishop Luis Antonio Cardinal Tagle (in photo) to allocate space for senior citizens at the Mass to be celebrated by Pope Francis at Rizal Park on Jan. 18. RODEL ROTONI

MANILA, Philippines–Various organizations of the elderly on Monday appealed to Manila Archbishop Luis Antonio Cardinal Tagle to allocate space for senior citizens at the Mass to be celebrated by Pope Francis at Rizal Park on Jan. 18.

In an urgent letter personally delivered by former Sen. Eddie Ilarde, the groups urged the organizing committee of the Archdiocese of Manila in charge of the papal visit to appreciate the senior citizens’ wish to pray with the Pope during the Mass.

“Acknowledging this venerable sector of Philippine society will show the whole world this country’s genuine concern for their welfare and dignity,” Ilarde said in a statement.

The groups said allocating space for the “poor and neglected older people who keep the faith in their remaining years” would be a “noble gesture” by Tagle that would “remain enshrined in their heart[s].”

Nick Ellman, head of one of the organizations of the elderly in Makati City, and Aristeo “Ayett” Garcia of the Rotary Club of Intramuros and chair of various seniors’ societies said “our revered older citizens deserve attention and recognition, especially at a time when a well-loved Pontiff [like] Pope Francis says Mass for the Filipino people.”

Praying with Pope Francis will ease the pain and suffering of the senior citizens asking for space at the Rizal Park Mass, they said.