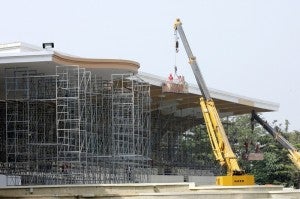 Department of Public Works and Highways workers repair the Quirino Grandstand in time for Pope Francis’ Mass at the Luneta in Manila at 3:30 p.m. on Jan. 18. The altar at which Pope Francis will say Mass at Rizal Park on Jan. 18 will not be decked with flowers but with colorful plants that can be found in backyards in rural Philippines. INQUIRER PHOTO / NINO JESUS ORBETA

MANILA, Philippines–The altar at which Pope Francis will say Mass at Rizal Park on Jan. 18 will not be decked with flowers but with colorful plants that can be found in backyards in rural Philippines.

It will also be replete with other native elements symbolizing the Philippines—from the marble top and the white linen cloth of the altar table to the papal chair.

“If we can’t bring the Pope to go around the Philippines, we will bring the Philippines and its elements close to the Pope,” said the designer of the altar, Rev. Alex Bautista, who is also chair of the Commission for the Cultural Heritage of the Church in the Diocese of Tarlac.

At a press briefing on Monday, Bautista said the marble top of the wooden altar table came from Romblon, while the white linen cloth that would cover it was spun from Bulacan’s piña fiber, an indigenous material used to make the barong Tagalog.

The canopy will feature Bulacan’s arts and crafts, while the altar will be adorned with San Francisco and Pandan plants, which are “very common in rural backyards,” Bautista said.

“In the design consideration… the concept is to serve the liturgical purpose and to have Filipino character and reflect the simplicity of the Vicar of Christ,” said Bautista, who also designed the papal chair.

Some of the design elements also have their corresponding symbolism relevant to the Filipinos, he said.

The San Francisco plant, for instance, requires light to acquire its colors, he said. “They need sun to have color. It’s like the faith of the people, [which comes from] Christ, who is the light of the world,” he said.

The altar table will also feature anahaw patterns to symbolize the strength of the Filipino people, he said. “The Filipino context will be incorporated in the design [of the altar], including the landscaping.”

At the Mass, the culmination of Pope Francis’s five-day apostolic visit, devotees will get the chance to hear the Argentine Pontiff speak in Filipino when he leads the faithful to recite the Apostle’s Creed, said Rev. Carmelo Arada Jr. of the service committee on liturgy.

The Mass will be in English, following the new translation of the third edition of the Roman Missal, while the Profession of Faith, to be led by the Pope, will be recited in the vernacular, Arada said.

“The intercessions of the Prayer of the Faithful are prayed using the different Filipino languages—Hiligaynon, Kapampangan, Ilokano, Cebuano, Waray, Bikolano… and the response will be in Tagalog,” he said.

The Mass will be capped with the lighting of candles and the singing of “Tell the World of His Love” to mark the 20-year anniversary of World Youth Day in the Philippines. “[T]he public is requested to bring their own candles,” Arada said.

Music will be provided by a 1,000-member choir and 200-member orchestra, said Rev. Rufino Sescon Jr., executive secretary of the steering committee. “This is the grand activity and we hope to hear and listen to the message of Pope Francis,” he said.