Aiza with Liza: More at peace 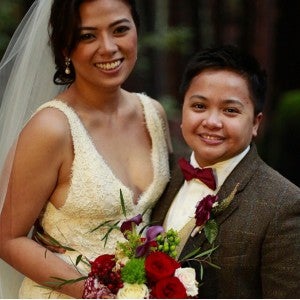 DALY CITY, California — Former child star and singer-songwriter Aiza Seguerra was in town for a weekend to do a show at Cache Creek Casino Resort in Brooks, California. But on December 8, many were surprised to learn Aiza and girlfriend Liza Diño had tied the knot in Ben Lomond, a 90-minute drive from San Francisco.

The intimate ceremony was reminiscent of the “Twilight” wedding with the Stones and Flowers Barn venue surrounded by redwoods.

“Getting married is settling down but that’s not us,” Aiza told Manila Mail in a brief interview before boarding the couple’s return flight to Manila. “It’s enjoying life more now with the person I love, everything that we do now is going to be better because we are doing it together.”

Aiza, who identifies himself as a transgender man, was not feeling well during the interview. He spoke in a hoarse voice, the reason he couldn’t perform a song for Liza’s march during their wedding.

“But the wedding went on beautifully,” said Emma Calayan, owner of the Calayan Skin Care Aesthetics in Tracy, California and a close friend of Aiza who helped the couple prepare for the wedding. “Everyone had a great time.”

About 65 people attended the ceremony.

“Mostly special friends, family and people we really care about,” she said. “We didn’t want a big ceremony because mas masaya pag intimate lang (we find it more meaningful when it’s intimate).”

Emma said the venue had been chosen during the couple’s visit to the Bay Area for Aiza’s concert tour in September.

“We took them to Napa after the show. They were thinking about getting married and wanted something old, rustic and in an old barn. So when we were passing by an old barn, they told me, ‘This is how we want to get married,’” she recalled.

It took two and a half months for Emma to prepare for the wedding. She’s no wedding planner, but her love for Aiza made her preparations – from booking the venue to getting caterers, the cake and flowers, to name a few – much easier to do. “It’s an effort of having friends to help out afterwards.”

Aiza and Liza’s love story began in 1999 when the two were introduced to each other by common friends. “We dated for about a year, broke up and lost touch. Thirteen years later, in 2012, we rekindled [our relationship],” said Aiza.

“She always had that special place in my heart, but the circumstances were not in our favor. But this time, it’s just right. Everything is perfect.”

Aiza had proposed to Liza before a concert audience that included their parents at the University of the Philippines in February this year.

When asked what she admired about Aiza, the former beauty queen said, “I can’t resist his sexy body and good looks, baka makawala pa (he might slip away).”

On a serious note, she added, “I embrace Aiza’s strengths and weaknesses—that’s how you know that you fully love a person.”

“His weakness is, he has very little patience for things, but I like that about him – na ko-compliment namin yung isa’t isa (we complement each other).”

The couple made their own vows. An excerpt of Liza’s vow to Aiza reads: “Forever got so much better because I choose you. Masaya ako na ikaw ‘yung binigay sa akin. Kapag tayong dalawa, kaya nating malampasan anumang pagsubok (I am happy you’re the one for me. Together, we can overcome any challenge).”

“I’ve seen Aiza with his other girlfriends in the past,” said Emma. “But he’s more at peace with Liza. He’s more open. He seems happier too. And when you see them together, you can tell they’re really meant for each other.”