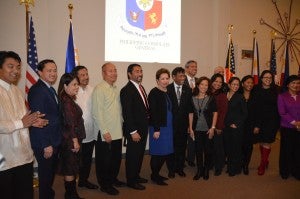 It was certainly a night to remember at the consulate’s Philippine Center Kalayaan Hall as winners gathered not just to be acknowledged but also, in the words of third-termer and only Filipina in the San Francisco School Board Hydra Mendoza, “to inspire one another.”

The first Fil-Am in the California State Assembly Rob Bonta of the 18th District who now also chairs the health and purse committees, was “inspired, invigorated and very energized with so many Filipino American elected officials around.”

“I am very excited to be with all of you because Filipino political empowerment is so very important to me and every one of us elected to office represents that empowerment and its future,” Bonta stated.

“We will encourage the others who may not be sure who are on the sidelines thinking about serving and not be served to step in to step forward and submit themselves for the service of our community. And for that I want to thank you as we don’t get thanked enough in going through our daily work,” he added.

For the consulate, the night was very important considering the long struggle that Filipino Americans have gone through to be recognized as an individuals and also as a community.

“This is something very important because it elevates the profile of Filipinos both as individuals and as a community,” Bensurto remarked. 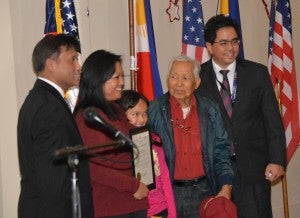 “This is a tribute to many Filipinos who fought for our rights for us to be heard. And what is the best place for us to be heard but in the city halls, in the assembly halls. This is where political decisions are actually discussed, policies are made, and it is very important for Filipino Americans to be right there in the corridors of power not for power itself but to be servants, to be able to serve their community,” the consul general stressed.

Filipino Americans have gone a long way from the time when only a handful of winners were received and acknowledged in a much smaller room in the consulate in the 1990s.

First Filipina Colma City mayor in 2008 and also the first Filipina mayor in all nine Bay Area counties then, Joanne del Rosario, noted that Filipinas numbered 12 of the 22 on the list of winners honored by the consulate.

“Having more Filipinos winning and actually occupying elective positions now than before fittingly in the Bay Area where there is a large concentration of Filipino Americans and where 22 out of some 26 candidates won is truly an amazing story to come out of the cocoon and be able to express ourselves represents the growing maturity of Filipino Americans in the US,” Bensurto observed.

“This is a work in progress and what that tells me essentially that we are now seeing the so-called sleeping giant now awakening and realizing its potential,” he added.

This is not to say, however, that Fil-Ams should sit on their laurels and be satisfied with what has been achieved, newly elected San Mateo County Harbor Commissioner Roberto Bernardo reminded everyone.

“There are 30 million Americans in California, where there are about 1.4 million Filipino-Americans or 3 percent of California population. If the total number of elective positions is 21,000, to have 3 percent, we should have 600 elected Filipino-American officials to approximate or match our population and we still have a lot of work ahead of us to reach that number,” Bernardo counseled.

Vallejo City School Board President Tony Ubalde further traced the demographics of California such that Filipino Americans are now the largest and fastest growing groups among Asians in the state and second only to the Chinese nationwide.

“Socio-economically Filipinos are now middle class. Educationally, Filipino Americans have more college graduates than any other Asian Americans, 27 percent of nurses that work and reside in LA County are Filipinos. But the Filipinos represent the least politically,” rued Ubalde, who also stressed the need to invest in new leadership in Vallejo.

For Michael Guingona, Daly City’s youngest mayor in 1996 and currently city council member, a position he first won in early 1990s, the Filipino-American community is still in a learning process, “an emerging community going through very much what the Japanese Americans went through in Hawaii.”

“What we need to do is to continue to move forward, we need not lose the traction that we gained over the years,” Guingona said. “Different ethnic communities get together to do things like this. In here, the cultural awakening and political awakening took some time and is still happening,” a passionate Guingona shared.

“Many are just reluctant to be in politics and public service; a low paying job, part time a lot of people didn’t have a thick enough skin to do this job as there is a lot thanklessness in it,” Guingona noted.

Mendoza added the need to build a pipeline for young people to follow in their footsteps into politics to make sure that “the 22 become 44 then 88 and so forth.”

“Then we can really take positions not only locally but also statewide then nationally. so that we as Filipinos are recognized and our voices heard in order that we can represent not only ourselves, but also all those who depend on us,” Mendoza

Six-term Mayor Jose Esteves of Milpitas, reportedly the best city to live in the whole Bay Area ranking being 29th in the whole of the US and voted by Money magazine as third best place to buy properties in the whole U.S., exhorted the Filipino Americans to excel anywhere and be proud of who they are.

“If you say you are proud to be a Filipino, you are obliged to excel, to be in the best of character, and to be the lead person wherever you are not necessarily in politics or government service. Let the people acknowledge: “Kasi Pilipino yan kaya magaling.” Ipagpatuloy po nating itaguyod ang pagka-Pilipino ang tunay na Pilipino kasi ang tunay na Pilipino di lang matalino, marangal, masipag at may sariling uri natatangi sa iba that is why we can we successful anywhere we are if we exercise being a true Filipino,”

Other winners present at the consulate reception were: