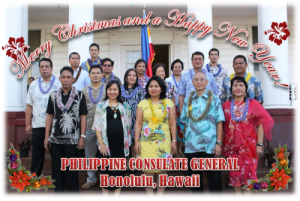 The date December 16 marks the first night of the Misa de Gallo or the Simbang Gabi  in the Philippines, a traditional Catholic nine-day novena in leading up to the commemoration of the birth of Jesus Christ.

This year’s Christmas party kicked off with a celebration of the Holy Mass and followed by a traditional “salu-salo” of Filipino food, cultural entertainment program and fellowship.

Philippine Consul General Gina A. Jamoralin said in her remarks that by celebrating the Misa de Gallo, “we bring back the true spiritual message of Christmas – of humility, loving one another, unity and thanksgiving.”

She also said that despite the calamities that have struck the country, “the Philippine government was able to handle the post-disaster response through adequate planning and response. As in Typhoon Yolanda/Haiyan, the State of Hawaii and the US government, through the USAID and the PACOM, have stood ready to assist the Philippines anytime if Typhoon Ruby/Hagupit had worsened.”

Jamoralin also stressed that “the promotion of Filipino culture and economic diplomacy will be the major goals of my mission in Hawaii. Tonight’s Paskuhan sa Konsulado, is clearly an endeavor to undertake a collaborative partnership with all major Filipino organizations in the spirit of unity and teamwork.”

Competitions for the best parol, best choral group among the five Filipino umbrella organizations, best in Christmas attire and door prizes throughout the program added to the event’s festive atmosphere. The night culminated with community singing of Filipino Christmas carols.