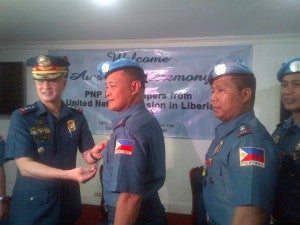 MANILA, Philippines- The Philippine National Police (PNP) honored Monday the last batch of police peacekeepers from the Ebola-hit Liberia after their 21-day quarantine at the Armed Forces of the Philippines (AFP) Medical Center in Quezon City.

Five police peacekeepers were awarded with “Medalya ng Papuri” from the PNP in honor of their sacrifice and courage in their mission.

Deputy Director Leonardo Espina, officer-in-charge of the PNP, led the awarding ceremony of the last batch of Filipino peacekeepers who were among the 133 UN peacekeepers from Liberia.

Espina cited the police peacekeepers as the “new heroes” of the country for their sacrifice and dedication.

Since 1992, the PNP has been sending contingents to the United Nations peacekeeping operations and missions, first in Cambodia and subsequently in other countries torn by conflict to provide services and assistance.

Read Next
Rival Leyte officials the only local execs to eat with Pope
EDITORS' PICK
Leveling up your ‘lutong bahay’ with the kitchen companion you never knew you needed
Cherry Mobile teams up with Cloud Panda PH, launches online store
Crisis seen in absence of jeepneys in Metro Manila
Gov’t urged to shift public transport system to service contracting
MMDA: Commuters to blame for chaos
WATCH: Mga eskwelahan na ginawang quarantine facility, binigyan ng dalawang linggo para linisin
MOST READ
MMDA to sue, slap P1,000 fine on bike group
MMDA: Commuters to blame for chaos
‘I am a natural-born Filipino’ — Gabby Lopez
Calida ‘just the lawyer, not the client’ and must ‘never lose his cool’ – Macalintal
Don't miss out on the latest news and information.