MANILA, Philippines — Pope Francis will meet with leaders of various religions when he visits the Philippines next month, pushing a message of tolerance in order to combat global religious conflicts, a church official said Monday.

The pontiff will hold a 10 to 15-minute dialogue with the dean of the Philippines’ largest Islamic studies center and a Taiwan-based Buddhist leader on January 18, according to Father Carlos Reyes, a member of the committee organizing the Pope’s visit. 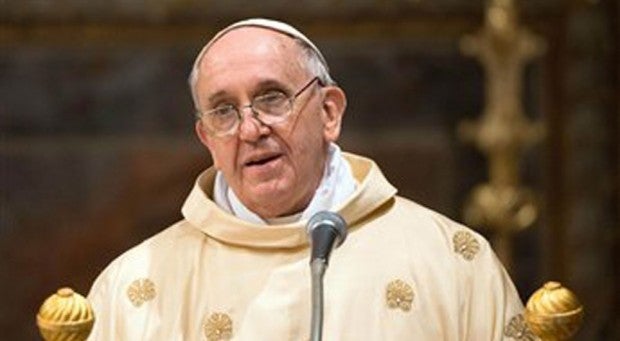 He will also meet with the Hong Kong-based regional head of the Greek Orthodox Church, as well as a Hindu leader, Protestant bishops, and a Manila-based rabbi, Reyes told reporters.

The dialogue will be held at the 400-year-old church-run University of Santo Tomas in Manila, where the pontiff will also address a crowd of 25,000 youths.

“The church is Catholic, it is universal, we are in dialogue with the world,” Reyes said.

“It is our job as men and women of religion not to allow the fundamentalists or extremists to hijack the religion.”

The event comes as the largely-Catholic Philippines is implementing a peace deal signed last March with its main Muslim rebel group to create an autonomous area for the Muslim minority in the southern islands.

It also comes as the government fights a small band of hardliners that have reportedly pledged allegiance to the Islamic State group, which has taken control of a swathe of territory across Iraq and Syria.

The military has in recent weeks intensified offensives against the Al-Qaeda-linked Abu Sayyaf, which is holding several hostages, including foreigners, in the troubled south.

Pope Francis will arrive in the country amid tight security on January 15 for a four-day visit highlighted by a mass in Tacloban City, ground zero for Super Typhoon “Yolanda” (international name: Haiyan) last year.

The pontiff’s visit has the theme “mercy and compassion” and is expected to draw millions of the faithful to the public events.