Rival Leyte officials the only local execs to eat with Pope 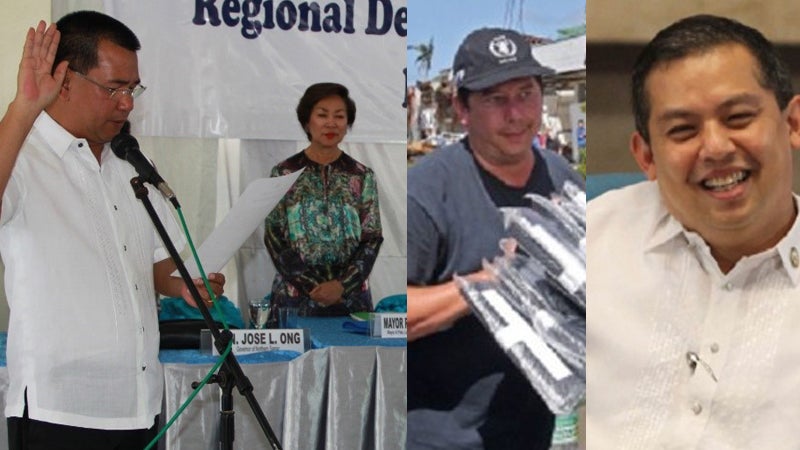 (From left) Leyte Gov. Leopoldo Dominico Petilla, Palo Mayor Remedios Petilla, Tacloban Mayor Alfred Romualdez and Leyte Rep. Ferdinand Martin Romualdez will get to join the luncheon with the Pope at the Archbishop’s Residence after he says Mass at the Daniel Z. Romualdez Airport upon his arrival on the morning of Jan. 17, 2015. PHOTOS OF THE PETILLAS FROM NRO8.NEDA.GOV.PH/INQUIRER FILE PHOTOS

TACLOBAN CITY, Philippines—Pope Francis will break bread with the poor and the homeless when he visits this city and nearby Palo town in Leyte next month.

But there are an affluent few who will get to join the luncheon with the Pope at the Archbishop’s Residence after he says Mass at the Daniel Z. Romualdez Airport upon his arrival on the morning of Jan. 17, 2015.

Palo Mayor Remedios Petilla will be one of the four local officials who have been given the rare privilege of welcoming Pope Francis by the Palo archdiocese.

Ironically, the Romualdezes and Petillas have long been political rivals in Leyte.

Mayor Petilla said she did not ask the Palo archdiocese to include her in the list of the chosen few who would get to meet the Pope. “It was the clergy’s decision,” she said.

But she admitted having that “floating on air” feeling at the prospect of meeting Pope Francis, one of the most well-loved Pontiffs.

Like Petilla, Mayor Romualdez said that he too was proud and happy that he would get to welcome the Pope to his city, considered ground zero of Supertyphoon “Yolanda,” which struck the city in November 2013.

“I will tell him, ‘Thank you for coming to Tacloban.’ His visit will be a big boost to us,” Romualdez said, when asked what he would say to the Pope when he greets him at the airport.

Mayor Petilla said several other mayors have asked her if they could join her at the airport to welcome Pope Francis.

“There were so many [who asked if they could join me] but I told them it was not my decision,” Petilla told the Inquirer.

But Fr. Amadeo Alvero, communications director and Palo archdiocese spokesman, said he had not received word about any particular politician or local official wanting to be part of the entourage who would welcome the Pope.

“I have not received any information that a politician has lobbied to be included in the papal visit. But all politicians, as Catholics, are invited to participate in welcoming Pope Francis on his apostolic visit here to our archdiocese,” Alvero said.

Pope Francis will be in Tacloban and Palo for a six-hour visit on Jan. 17 primarily to meet with the victims of Yolanda and to assure them that they have not been forgotten by God.

At least 25 Yolanda victims from Eastern Visayas and five survivors of the killer earthquake in Bohol in October last year will have lunch with the Pope.

But local officials who wish to see Francis when he visits this city and Palo can join the parishioners at the Mass that the Pontiff will celebrate.

Each of the 78 parishes in the Archdiocese of Palo was given 1,000 slots for the papal Mass, said Alvero.

“They can be one among those who are official parish delegates who will be attending the Mass at the airport,” Alvero said.

The Catholic Bishops Conference of the Philippines (CBCP) earlier said politicians were not on any of the guest lists of the Pope during his visit to the country. Apparently, the four local officials are the exceptions.

Pope to eat ‘paksiw,’ other Filipino food during lunch in Leyte