Fil-Am from Cavite is California Teacher of the Year 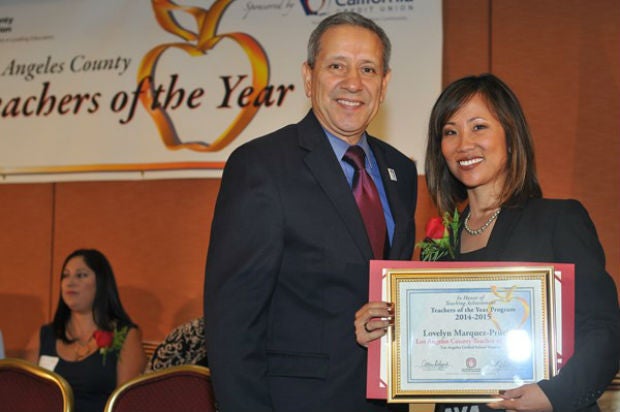 LOS ANGELES–When Filipino-American Lovelyn Marquez-Prueher was a young immigrant student struggling to learn English, her teacher thought she had a learning disability. She also got bullied by classmates because of her foreign accent.

“Those challenges have made me a strong advocate for immigrant students who are English learners,” said Marquez-Prueher, the first Filipino to become a California Teacher of the Year.

A 34-year-old English teacher at Dodson Middle School in the Los Angeles Unified School District, Marquez-Prueher has recently been selected as one of the top five among the nearly 300,000 public school teachers in the state.

As a California Teacher of the Year, she serves as a standard-bearer for the teaching profession statewide.

“This is not just an award but an opportunity to talk to students, parents and fellow teachers all over California about what it’s like to be an immigrant…and to be suspected of having a learning disability because of language needs,” she said. “This is about overcoming obstacles by working really hard and not settling for being average.”

Marquez-Prueher, whose family is from Cavite, came to the United States when she was nine years old. As a newcomer, she had a tough time in the classroom, having to overcome not just the language barrier but also the cultural gap.

When she was in third grade, her teacher asked which in the group didn’t belong in a drawing of a spoon, fork, knife and drinking glass.  She confidently answered: “the knife.”

As the teacher corrected her, explaining that the first three were utensils for eating and the last was for drinking, the young Marquez-Prueher nearly broke down in tears.

“I wanted to explain that in the Philippines, we don’t use a knife to eat,” she said. “That was my earlier recollection of feeling different.”

“This shows how I have come full circle from being an English learner who was suspected of having a learning disability simply because of my language needs to becoming an educator who can make a positive difference in the lives of immigrant students,” she added.

About a quarter of the student population in Los Angeles County–including 3,695 Filipinos–are English learners, statistics show.

Marquez-Prueher has been training colleagues on effective approaches in teaching students who–just like her when she was growing up–are not native English speakers. As her school’s volunteer bilingual coordinator, she monitors the progress of English learners.

When she was in her early teens, Marquez-Prueher was hired to tutor a neighbor, who just arrived from the Philippines.

“After I read with him every day for weeks, he started to read with more ease and confidence,” she said. “At that moment, I felt an inexplicable joy…I knew then I wanted to become a teacher.”

Besides advocating for English learners, Marquez-Prueher is also a leader in promoting partnerships with parents and the community, said Dodson Middle School Vice Principal Agnes Pitlik.

“She is an exemplary model for other teachers,” said Pitlik, adding that Marquez-Prueher is well-loved by her students and their parents.

“She genuinely cares about her students and wants the best for them,” said Dannielle Holloway, mother of one of her students.

Marquez-Prueher’s father worked as a seaman and was often away from home. “My lolo and lola helped my mom take care of me,” she said. “It took a village to raise me.”

This type of Filipino-style partnership in caring for children is the core of her advocacy for teacher mentorship and a strong school-family link.

“Teachers who help each other get better at their craft and become more effective in providing the best education for their students,” she said. “Parental support is critical in making sure the children are mentally and emotionally prepared to learn.”

“My parents, who are very religious, taught me to be honest, so I’m very sincere and open with my students,” she said. “I tell them heartfelt stories about the challenges I faced as a child, how I was bullied because I didn’t speak English well.”

In response, her students become more engaged and they come up with “really powerful” writing projects, she said.

In September this year, Marquez-Prueher and another Filipino, Maricar Fortuno Catalan, were selected as LA County Teachers of the Year. It was the first time in LA County’s history that two Fil-Am teachers made it to the county’s top 16, said Susan Bishop, coordinator of the countywide competition.

The top 16 LA County teachers were considered for the statewide competition, and Marquez-Prueher was selected as one of the top five who will be honored at a special event in Sacramento in February.

The competition is part of the National Teacher of the Year program, the nation’s oldest and most prestigious recognition program that shines a spotlight on excellence in teaching. It is designed to honor educators for “exemplary dedication, compelling classroom practices, positive accomplishments and professional commitment,” Bishop said.

Marquez-Prueher, who has been teaching for 11 years, obtained a bachelor’s degree in English from Mount St. Mary’s College in Los Angeles and a master’s in Education from California State University, Los Angeles.

She is currently in the Philippines with her family to celebrate Christmas with relatives in Cavite.

Fil-Am voted teacher of the year by Cypress high school