Tired of waiting for pardon, ‘Abadilla 5’ take case to UN 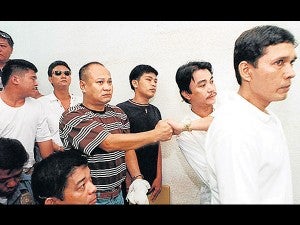 Tension is writ all over the faces of the five accused in the killing of former PC Colonel and Ilocos Norte Vice Gov. Rolando Abadilla as they await the promulgation of the case by Judge Jaime Salazar on Aug. 11, 1999, in Quezon City. The judge found the five guilty but they have steadfastly professed innocence. INQUIRER FILE PHOTO

MANILA, Philippines—The five men convicted of the 1996 killing of Lt. Col. Rolando Abadilla are seeking relief from the United Nations High Commissioner for Human Rights (UNHCHR) over their continued imprisonment.

Two of them, Lenido Lumanog and Augusto Santos, have filed a complaint against the Philippine government with the UNHCHR’s Human Rights Council, asserting that their rights to life and liberty were being violated as they have been behind bars for 18 years now.

Known as the Abadilla 5, they have been waiting for President Benigno Aquino III to grant them clemency since 2012, saying that they have exhausted all legal remedies to gain their freedom.

The Board of Pardons and Parole recommended the commutation of their sentences in November 2011, but Justice Secretary Leila de Lima pushed for a conditional pardon or executive clemency in 2012. This has yet to be acted upon.

“The Office of the President, despite his recommendation, has not signed their release from incarceration,’’ said Timoteo Sapurco and Amyliza Balliao of the Philippine Jury Campaign, who filed the complaint on behalf of Lumanog and Santos.

Sapurco and Balliao said their continued detention violated Articles 2, 6 and 9 of the International Covenant on Civil and Political Rights.

“In writing this communication, the authors wish to highlight the basic, fundamental and universal rights of any free man as per the covenant which have been violated by representatives [and] officials of the Philippine government in the pursuit of justice,’’ Sapurco and Balliao said.

They said the case of the Abadilla 5 was unique in that their continued detention depended entirely on the President.

“For the past three years, the recommendations for their release has been awaiting his signature. Primarily, it is for this reason that the authors are submitting this communication to substantiate the immediate release of the Abadilla 5,’’ they said.

They said the violation of their human rights, including their arrest without warrants, torture, inhumane treatment during detention and unfair trial, could neither overturn their conviction or undo their “18 years of suffering’’ in the maximum security compound of the national penitentiary.

“And yet, mere appreciation by the Philippine government and the Office of the President, in particular, of their rights constitutionally, domestically and under the covenant will restore their dignity, liberty and their lives,’’ they said.

The complaint detailed the violation of their rights under the International Covenant—from their illegal arrest to their continued detention.

The five protested their innocence and accused the police of torturing them into admitting that they had shot and killed Abadilla.

Abadilla, who had headed the dreaded Metrocom Intelligence and Security Group which tortured political prisoners during martial law, was ambushed while his car was stuck in traffic on Katipunan Avenue in Quezon City, on June 13, 1996.