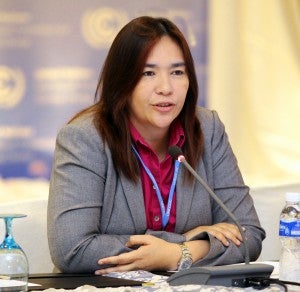 LOS ANGELES – Filipino climate change activists added their voices to the worldwide clamor for steps to stop the continued emission of greenhouse gases, in time with President Barack Obama’s year-end speech on the issue and the international climate change conference in Lima, Peru.

“Our typhoons have already spoken on our behalf. Let us also give attention to other vulnerable countries most especially the members of the Climate Vulnerable Forum. They also have stories to tell,” said Mary Ann Lucille L. Sering during her speech at the Climate Change Conference in Lima, Peru.

Sering is the vice chairperson of Philippine Climate Change Commission. She restated the Philippines’ call for international action to prevent man-made climate catastrophes. She also expressed thanks to the aid given to the Philippines during its time of great need.

“On behalf of our country, we continue to express our gratitude for the overwhelming support that the global community continue to provide a year after Haiyan, one of the strongest typhoons to hit landfall in history caused so much devastation to our country,” Sering said. The Philippines was appointed to lead the members of the Climate Vulnerable Forum for 2015.

According to the World Health Organization (WHO) health impacts due to climate change will occur unevenly around the world making some countries more vulnerable than others.

“In general, rich populations will be better protected against physical damage, changes in patterns of heat and cold, introduction or spread of infectious diseases, and any adverse changes in world food supplies,” said Ruel Serrano of the WHO Regional Office for the Western Pacific in an interview with INQUIRER.net.

Climate change is estimated to add at least US$2 to 4 billion in annual health sector costs by 2030. “Given the accumulated scientific evidence on the linkages between public health and climate change is the core of proper policy, continues to make efforts to coordinate and cooperate with academia and national policy decision makers,” Serrano added.

The State of California has been addressing climate change through early action items and Assembly Bill 32, which requires “the California Air Resources Board to develop a Scoping Plan that describes the approach California will take to reduce greenhouse gases (GHG) to achieve the goal of reducing emissions to 1990 levels by 2020.”

The United States continues to produce an increased average annual rate of 0.2 percent of greenhouse-gas emissions.

Meanwhile, Filipino-Americans at an event called “Voices from the Struggle” December 15 at the Rosewood United Methodist Church in Los Angeles shared their views on climate change.

“Every year, climate change is reaching dangerous heights and its always the poor and working families that suffer the most neglect from their own government whether you look at the Typhoon Yolanda or Hurricane Katrina,” stated Fil-Am Nicole Cababa.

Cababa emphasized the “need to continue educating communities about the root causes of climate change and the suffering of the Filipino people who have yet to receive any relief from the Aquino government despite the outpouring of support from the international community.”

Read Next
Fil-Am from Cavite is California Teacher of the Year
EDITORS' PICK
DOH warns vs eating raw meat, exotic animals amid coronavirus outbreak
In appreciation: Kobe Bryant, a life defined by hard work
SM continues to send relief assistance to remote towns in Batangas
Get exciting deals and discounts when you download the new McDonald’s App
‘House of Kobe’ launched in Valenzuela City hours before hoops star’s death
4 Ways Jollibee’s new store will serve a leveled-up kind of joy to Filipinos in the South
MOST READ
Kobe Bryant’s helicopter flew in fog that grounded other choppers
Additional bill calling for ABS-CBN franchise renewal filed in Congress
Crews work to recover remains at site of Kobe Bryant’s crash
Reckless gambit
Don't miss out on the latest news and information.