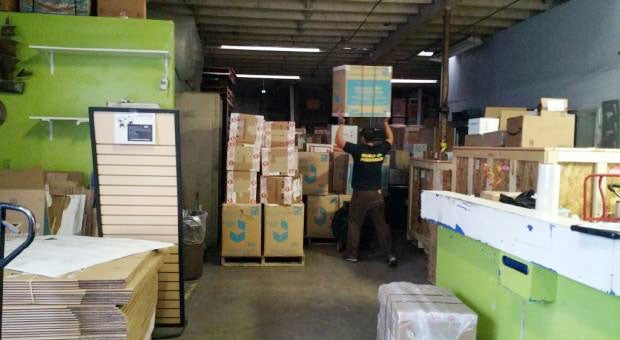 Cargo forwarders are on overdrive 24 hours a day for the holidays. PHOTO BY CRISTINA P. RODRIGUEZ

“Balikbayan” boxes are familiar sights in the homes of Filipinos with relatives who live or work in other countries.

Sending balikbayan boxes—defined by the government as packages of personal effects or gifts—has become part of the Filipino tradition of gift giving and has served as a way to preserve strong family ties despite the distance.

The use of balikbayan boxes began in the 1970s as an encouragement for overseas Filipinos to come home and see their country again. They were called balikbayan—homecoming Filipinos—and they were allowed to carry as much stuff as they could fit in regulation cardboard boxes the use of which the government arranged with airlines.

Today, the practice is no longer limited to Christmas and among the users of balikbayan boxes are migrant workers who send things to their families in the Philippines by sea freight any time of the year.

Every year, an estimated 5.5 million balikbayan boxes are shipped to the Philippines, and 40 percent of them arrive between September and year-end, data from the Bureau of Customs showed.

According to the customs bureau, approximately 65 percent of balikbayan box shipments arrive at the Manila International Container Port, while the rest arrive at the Port of Manila (South Harbor), Cebu, Davao and Subic. The boxes contain mostly canned goods, groceries, toiletries and clothing.

What can be sent

There are rules for sending balikbayan boxes.

The boxes should contain noncommercial goods or goods not in commercial quantity and are strictly for personal use, with the value not exceeding $500 (around P22,000).

A sender is allowed to ship only one box within a six-month period. At $500 per box, the 5.5 million balikbayan boxes shipped to the Philippines every year bring $2.75 billion (P123 billion) in revenue.

Freight forwarding companies have different shipping rates, depending on the size and destination of the balikbayan boxes.

The Fair Trade Enforcement Bureau of the Department of Trade and Industry (DTI) has accredited 654 Philippine sea freight forwarders for handling balikbayan boxes.

Balikbayan boxes are usually consolidated and shipped in one container on cargo vessels bound for the Philippines. Each container is loaded with around 400 balikbayan boxes. Shipments from Asia typically arrive in Manila in 15 to 20 days, while those from North America or Europe arrive in 55 to 65 days.

Delays or nondelivery of balikbayan boxes may be due to natural calamities, undeclared or misdeclared goods, nonremittance of funds by the foreign freight forwarder, or inclusion of items not allowed in balikbayan boxes.

Earlier this month, the customs bureau launched an online tracking system that allows Filipinos expecting balikbayan boxes to track the progress of their packages.

The tracker is accessible through the Balikbayan Box Tracker banner found on the customs bureau’s website (www.customs.gov.ph). It shows the names of the foreign forwarder and the local forwarder or broker, entry date, clearance date and current status of the shipment.

According to Customs Commissioner John Phillip Sevilla, people expecting balikbayan boxes should know the name of the forwarder and bill of lading number to be able to track the shipment that includes their boxes.

The DTI expects the online tracking system to “lessen, if not totally eliminate, consumer complaints of losses, nondelivery and pilferage of balikbayan boxes.”

Problems with balikbayan boxes? Fret no more as BOC’s online tracker kicks in

Read Next
The resurrection of Igarta
EDITORS' PICK
Gilas out to prove Korea win not a fluke; Tab fires back at ‘lucky shot’ remark
Piolo Pascual: The Ultimate Heartthrob continues to level up
SANTIS Delicatessen: The road to survival is sweet and savory
LOOK: ‘Low vaccination’ turnout in 4 Manila sites after no walk-in policy
Internet: Overcoming pandemic lockdowns
Eleazar: PNP open to ICC probe but PH judicial process is working
MOST READ
Lacson or Pacquiao a possible presidential candidate for NPC – Sotto
Palace: Face shields no longer needed to be worn outdoors
Duterte to issue memo on face shields this week
DFA opening 10 satellite offices to boost passport services
Don't miss out on the latest news and information.