Cuisia slams China at US meet 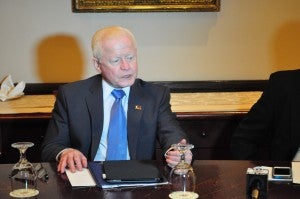 Ambassador to the US Jose Cuisia Jr. FILE PHOTO BY ELTON LUGAY

MANILA, Philippines—The Philippines’ top diplomat in the United States has come out strongly against China’s reported massive reclamation activities in the Kalayaan group of islands, while appealing to Beijing to participate in the arbitration case that the Philippines has brought before a United Nations tribunal.

“We acknowledge China’s role in world affairs and support its peaceful rise. To be truly viewed as a positive force and a responsible power, China must manifest its adherence to and respect for the rule of law,” said Ambassador Jose L. Cuisia Jr. in remarks at a forum of the World Affairs Council of Missouri at the Sheraton Clayton Plaza Hotel in Missouri.

“A world power following the rule of law is now an obligation, not a choice,” said Cuisia in his address before prominent business leaders, policy makers, diplomats and academics.

The ambassador made his remarks in the wake of reports that China has been conducting massive reclamation activities in the Philippine-claimed territories that have allegedly resulted in the destruction of the marine environment of Johnson Reef, McKennan and Hughes Reef, Cuarteron Reef and Gaven Reef, which are all part of the Kalayaan group.

China has rejected the Philippines’ move for international arbitration, saying the Permanent Court of Arbitration at The Hague had no jurisdiction over the territorial dispute. It also said that the United Nations Convention on the Law of the Sea (Unclos), which the Philippines is invoking in its case to protect its sovereignty over its exclusive economic zone (EEZ), cannot be used to decide the disputes.

The Philippines has challenged before the tribunal China’s sweeping claim over almost the whole South China Sea. China claims about 90 percent of the sea, displaying its reach on official maps with a so-called nine-dash line that stretches deep into the maritime heart of Southeast Asia, and occupying disputed territories and waters that overlap the EEZs of other Southeast Asian states like Vietnam.

In a related development, the Department of Foreign Affairs yesterday said it was studying the implications of Vietnam’s legal challenge to China in the same arbitration tribunal where the Philippines initiated its suit.

“We are studying Vietnam’s submission and its possible implications,” Charles Jose, DFA assistant secretary and spokesperson, said in a text message to reporters.

Vietnam, in a move long awaited by the Philippines, has followed the latter’s lead, submitting its position to the Permanent Court of Arbitration on the festering dispute involving several countries, to ensure that the court pays attention to “our legal rights and interests.”

With Vietnam joining the fray, Philippine officials believe that the country’s claim to certain territories in the South China Sea has been strengthened.

In a statement, Vietnam’s foreign ministry opposed China’s claim over Hoang Sa and Truong Sa islands and adjacent waters in the South China Sea, saying that it had historical and legal basis to support its claim.

In his remarks, Cuisia said the Philippines continued to believe that the Unclos provides a viable mechanism to resolve conflicts, particularly through the process of arbitration that the Philippines had initiated.

“We see arbitration as an open, friendly and durable solution to the dispute. We believe it benefits everyone,” said Cuisia, a former central bank governor.

“It is only in advocating and practicing the rule of law that we can ensure that our dynamic and thriving community continues to exist for everyone’s benefit,” he said.

“The challenge before us is to encourage the major players, in this case China, to adhere to the rule of law,” he said.

“What is needed is a shared and serious commitment by all stakeholders to exert political will that transcends national propaganda and the dynamics of international affairs,” Cuisia added.

He said the clarification of maritime entitlements would assure peace, security, stability and freedom of navigation in the South China Sea and for the rest of the international community.

Turning to the controversy over the Enhanced Defense Cooperation Agreement, Cuisia said that the Edca, whose constitutionality has been challenged in the Supreme Court, is an assurance of US help in maintaining the country’s maritime security.

“Our alliance and partnership (with the US) could not have been more evident than during the tragedy that was Typhoon ‘Haiyan’ (Yolanda),” said Cuisia, noting the overwhelming and timely assistance by the US military in the search, rescue and relief operations in the regions devastated by the strongest typhoon ever to make landfall.

He also cited the more than $86 million that Washington committed as well as the $60 million pledged by US businesses and nongovernment organizations to support relief and rehabilitation efforts in the country.

Read Next
PH Christmas story: The advent of ‘balikbayan’ box
EDITORS' PICK
Comelec won’t proclaim party-list groups yet
House energy committee chair Arroyo bats for cheap electricity
Duterte signs law giving rights, more protection to foundlings
Honolulu Café is the cure for your Egg Tarts and Roastings cravings
DOJ-led panel drops 29 cases of torture, EJKs
Luxe property: A way to build, preserve wealth
MOST READ
Heart Evangelista gets a ‘no’ from Chiz Escudero after asking, ‘Do I deserve a bag?’
Man posing as Marcos spox revealed to be an inmate in Bilibid — Guevarra
CebuPac places pilot under disciplinary review after ‘baseless’ post vs Robredo
3 Iloilo residents found with Omicron subvariant
Don't miss out on the latest news and information.