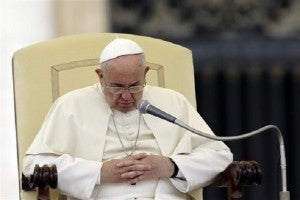 TACLOBAN CITY, Philippines—The facility named after Pope Francis and located within the eight-hectare Archbishop’s Residence in Palo town, Leyte province, is almost complete and ready for his visit next month.

“It is intended for the orphans and elderly,” and ideally for those who lost their loved ones during the onslaught of Supertyphoon “Yolanda” in the province, said Fr. Amadeo Alvero, communications director of the Archdiocese of Palo.

The Pontiff himself will bless the Pope Francis Center for the Poor when he goes to Palo, the seat of Catholicism in Eastern Visayas, on Jan. 17.

Funds for the construction of the P60-million facility came from the Cor Unum, considered the Caritas of the Vatican, Alvero said.

The center has five structures—an administrative building, clinic, dining hall and separate sleeping quarters for elderly people and orphans—with a combined floor area of 1,414.60 square meters. The two quarters can accommodate 40 persons each.

Even before the Pope’s “apostolic journey” to Leyte was announced, Archbishop John Du was already mulling over the idea of constructing an orphanage center for both the young and elderly people in the archdiocese, Alvero said.

Robert Cardinal Sarah, president of the Pontifical Council Cor Unum which is the dicastery of the Holy See responsible for charity and humanitarian assistance, led the groundbreaking ceremony for the center during his visit to Palo on Jan. 28 this year.

It was Sarah himself who announced the Pope’s interest in visiting Palo and Tacloban, considered Ground Zero of the world’s strongest typhoon to make landfall.

Construction of the Pope Francis Center for the Poor began in July and is now 90-percent complete, said Fr. Chris Arthur Militante, information and social communications officer of the archdiocese.

“By the time the Holy Father arrives, the center would have been finished, including the furniture,” he said.

During the papal visit, persons with disabilities and senior citizens will be given accommodations inside the facility instead of going to the Tacloban airport where Francis will officiate a Mass in the morning of Jan. 17.

A Korean missionary group based in Kkottongnae will eventually run the facility. During his trip to South Korea in August, Francis visited a rehabilitation center called “House of Hope” in Kkottongnae, which is run by Fr. John Oh Eumseong.

Evacuees resist transfer to place away from papal route