Only 3 Filipinos rescued in Bering Sea 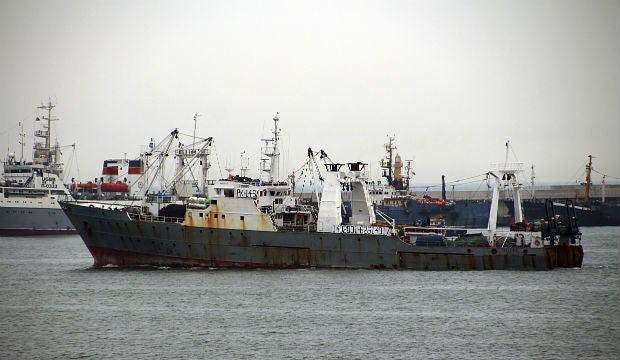 In this undated photo, South Korean fishing boat Oryong 501 is seen in a port. South Korean officials expressed fear Tuesday, Dec. 2, 2014, of a huge death toll after rescuers failed to find any of the more than 50 fishermen missing after their ship sank amid high waves in the freezing waters of the western Bering Sea on Monday, Dec. 1. AP/Yonhap

MANILA, Philippines—Three of the 13 Filipinos on board a fishing vessel that sank off Russia’s far east coast last Monday were among the eight who had been recovered, the Department of Foreign Affairs (DFA) said Tuesday.

But as of press time, the DFA had yet to receive information on the identities of the 13 Filipinos and the three who survived.

The 1,753-ton Oriong-501 is a South Korean fishing vessel that sank amid high waves off the freezing waters of the western Bering Sea.

The trawler was carrying 60 people—aside from the 13 Filipino crew members, there were 35 Indonesians and 11 South Koreans and one Russian inspector aboard the vessel, which had been reported to be catching pollock, a delicacy in South Korea.

One Korean sailor was confirmed dead while the Russian and six foreign crew members were rescued.

Four ships, including two associated with Sajo, had been combing the site, the spokesperson said, but the search was being hampered by poor weather conditions and rough seas.

“We still don’t really know how many may have managed to take to the lifeboats,” he said.

In a text message, DFA spokesperson and Assistant Secretary Charles Jose said the Philippine Embassy in Moscow has instructed the honorary consul general in Vladivostok to coordinate with local authorities on the rescue operations.

The Philippine Embassy in Seoul has also been instructed to contact Sajo Industries, the owner of the vessel, to get more information on the identity of the 13 Filipino crew members.

Authorities in the Russian port of Petropavlovsk-Kamchatsky said the rescued fishermen were well and would be taken to South Korea once the weather improves.

“The condition of the fishermen who were rescued is fine,” Artur Rets, chief of the rescue center at the Petropavlovsk-Kamchatsky port, told the RIA Novosti news agency.

An official from Sajo, who did not want to be named, said the ship had eight lifeboats and that the seven fishermen who survived and the person later found dead used one of them to escape. The captain of the ship had issued an escape order and it was believed that the rest of the crew also attempted to escape, he said.

At the time of the sinking, the waves were more than 4 meters high and the water temperatures were below minus 10 degrees Celsius, he said.

The South Korean ministry official said it is believed that the ship, which was catching pollock, began to list after stormy weather caused seawater to flood its storage areas. Kim Kang-ho from Sajo Industries, the canned tuna company that owns the ship, said the 2,000-ton vessel was 36 years old.

An official from South Korea’s foreign ministry, who refused to be named citing office rules, said Tuesday that the death toll was expected to rise because rescuers failed to find any of the missing passengers. Four fishing ships that were operating nearby continued to search for survivors, but harsh weather conditions had limited their mobility, the official said.

South Korean Prime Minister Chung Hong-won told a Cabinet meeting that the government would work with Russia to speed up the rescue efforts.

Kim from Sajo said the ship left from Busan, South Korea, on July 10 for the Bering Sea to catch pollock, a winter delicacy in South Korea.

Russia allows South Korean fishermen to fish in its waters for pollock and other fish.

The ship’s sinking comes months after South Korea experienced its deadliest maritime disaster in decades. The sinking of the Sewol ferry off South Korea’s southwestern coast in April left more than 300 passengers dead, mostly teenagers on a school trip. The accident caused nationwide grief and fury. Christine Avendaño with AP and AFP

13 Filipinos among 52 missing in Bering Sea