US Catholic officials see pope visit as a rebirth 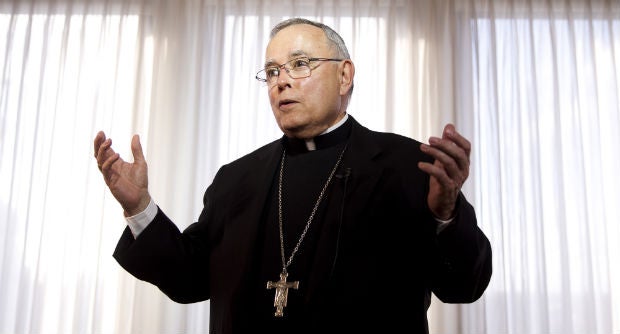 Philadelphia Archbishop Charles Chaput speaks during a news conference Monday, Nov. 24, 2014, in Philadelphia. Roman Catholic leaders in Philadelphia are predicting as many as 2 million people could turn out to see Pope Francis during his first U.S. visit as pontiff in Sept. 2015. AP

PHILADELPHIA — Philadelphia’s archbishop said Monday that hosting Pope Francis in the city next year during his first U.S. visit as pontiff could foster a “rebirth” for an archdiocese that has struggled with financial problems and sex abuse scandals during the last decade.

In January 2015, the Holy Father is also set to visit the Philippines, where he is expected to meet victims of Supertyphoon Yolanda (international name Haiyan).

Philadelphia Archbishop Charles Chaput told reporters that the pope’s visit for the World Meeting of Families could be a blessing for the archdiocese, which has been dogged by scandals, including one involving the first U.S. church official charged with mishandling abuse complaints against clergy.

“I’m really enthusiastic about this now, and it could be a rebirth of the diocese, and I’m grateful for the opportunity,” Chaput said.

Several priests in the archdiocese have been convicted of child sex abuse or charged with it. Two grand jury reports since 2005 unearthed scores of complaints kept in secret archives at the archdiocese for years.

The World Meeting of Families is scheduled for Sept. 22 to Sept. 27. It will feature workshops, lectures and an outdoor Mass. Officials predict that as many as 2 million people could attend it.

Chaput said he heard more than two years ago that it was possible for then-Pope Benedict XVI to travel to Philadelphia for the event. At the time, he said he was nervous because of low morale within the archdiocese, but he’s now excited about Philadelphia’s chance to host Pope Francis.

The pope also may visit New York and Washington.

Who will join Pope Francis for lunch in Leyte?

Pope Francis in the Philippines