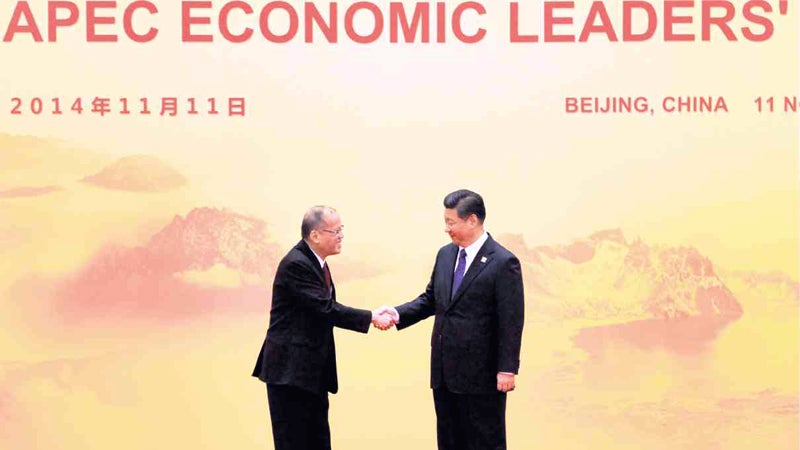 BEIJING—Icy relations between the Philippines and China seemed to have thawed after President Aquino and Chinese President Xi Jinping met Tuesday on the sidelines of the Asia-Pacific Economic Cooperation (Apec) summit.

The President said he was able to speak to Xi after a tree-planting ceremony attended by all 21 leaders of the Apec economies. He said the weather was quite cold and they spoke to each other for about 10 minutes.

“We are very happy in the sense that it’s the first time that we’ve had … one direct contact with them after I met with (former) President Hu Jintao previously. So it’s a nice opening. Hopefully, it will lead to something concrete,” Aquino said in a coffee meeting with reporters Tuesday night at the Philippine embassy here.

Xi expressed hopes China and the Philippines could return to a past understanding on issues related to the South China Sea, the official Xinhua news agency said, reporting on the meeting between the two leaders.

China hopes the Philippines can “constructively deal with” the issue, the Xinhua report added, according to Reuters.

The President talked to reporters for almost an hour before he left China for Burma (Myanmar) to attend the Association of Southeast Asian Nations Leaders’ Summit.

He said that in his short but “extensive” conversation with the Chinese president, Xi had “hoped that the Philippine side could return to the basis of the previous consensus and go in the same direction as China to deal with the relevant issues in a constructive way and to create conditions for the healthy development of China-Philippine relations.”

Aquino said he told Xi that “any conflict does not enhance our ability to concentrate on improving the lot of our people. And so there was an agreement there.”

Territorial disputes in the potentially oil-rich South China Sea have caused friction between China and some of its Asian neighbors.

Aquino made a state visit to China in 2011. But relations between the two countries have been strained following Chinese incursions in the West Philippine Sea, prompting Manila to file a case against Beijing in the UN arbitration tribunal. China has refused to participate in the proceedings, insisting that the issue be resolved through bilateral dialogue.

The President said that in his last interaction with Xi and fellow Apec leaders he asked for their support for the Philippines as it prepared to host next year’s Apec summit.