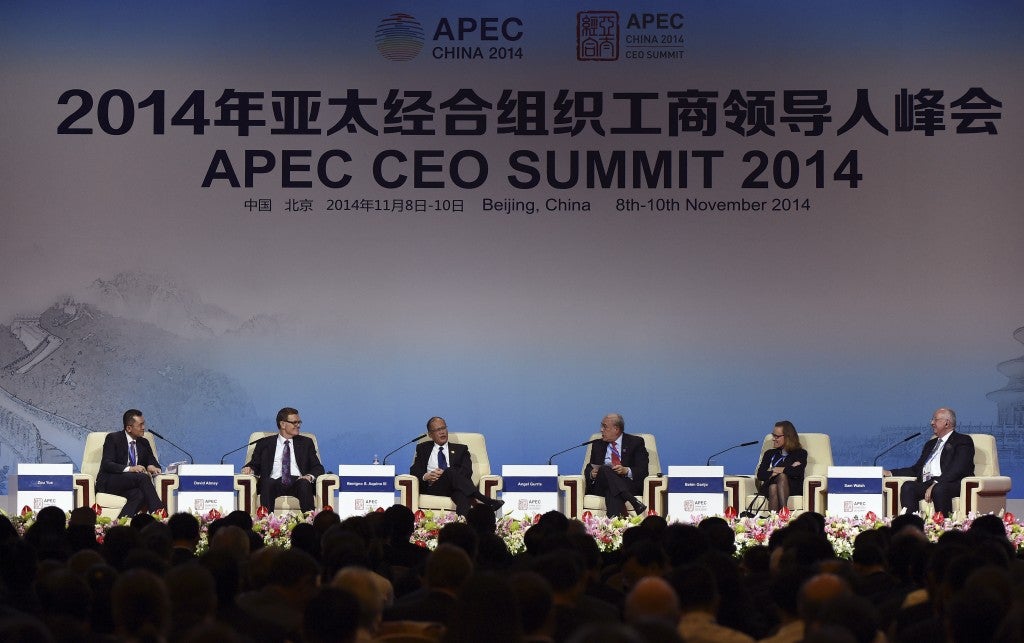 BEIJING—Addressing executives of major business interests in the Asia-Pacific region, President Aquino on Sunday said the Philippines was seeking harmonious relationships with every nation, declaring that “without stability, prosperity is an impossibility.”

“Anything that fosters greater stability is an objective for us because we do want to achieve more prosperity for our people and together with the rest of our brothers and sisters throughout the region and throughout the world,” Aquino said shortly after his arrival for the 22nd Asia-Pacific Economic Cooperation (Apec) meeting here.

First stop was the Apec CEO summit organized by the China Council for the Promotion of International Trade and attended by 1,500 delegates, mostly from Chinese enterprises.

In a speech on how his 4-year-old administration was making the country more competitive, the President said he had kept “true” to his promise to institute many reforms, including pursuing “all those who committed wrongdoing regardless of their position or influence, so that they may be brought to justice.”

He also said his administration had “fostered a business environment that rewarded hard work and innovation as opposed to a mere willingness to bend the rules.”

Under his watch, Aquino said the average growth of the country was at 6.3 percent, “a stark improvement” from the last three years of the Arroyo administration which was at 4.3 percent.

He noted that the Philippines had been cited by the World Economic Forum’s competitiveness report as the most improved country since 2010 and that under his watch, Manila had gotten 20 positive credit ratings from agencies around the world.

“Indeed, over the course of our administration we have proven good governance is good economics,” he said, adding that his government was investing in its “greatest resource,” which is the Filipino people so that the nation could sustain its momentum.

He cited the budget increases in education and training people so they could get better jobs and more than doubling the annual allocation for infrastructure.

“These are just a few examples of our continued efforts to keep the dynamo of progress engaged in full throttle, and it is clear, there is no better time to invest in the Philippines than now,” he said.

During the forum, the President was asked about Philippine and Chinese relations. He said it was “in the Philippines’ interests to achieve harmony with all of its neighbors.”

The President was apparently referring to the territorial dispute with China. Manila has brought a case against Beijing in the UN arbitration tribunal over the China’s nine-dash line claim over the entire South China Sea, including the Philippines’ exclusive economic zones.

Aquino said he was “happy to note” that there was significant growth in the two countries’ trade and cooperation in food production and that Chinese teachers in Mandarin had been coming to the Philippines.

Moreover, he pointed out that Philippine corporations had invested $2.5 billion in the Chinese economy while China had reciprocated with $600 million in investments in the Philippines.

There were 800,000 Filipino tourists in China while 200,000 Chinese tourists have gone to the Philippines.

“So all of these numbers, I am told, have continued to grow. And we seek to have again harmonious relationships with everybody so that we can concentrate on solving a lot of domestic problems that have to be addressed now,” he said.

The Apec summit was to open formally Sunday night when leaders of 21 economies were to attend the welcome dinner and cultural performance hosted by Chinese President Xi Jinping at the Water Cube.