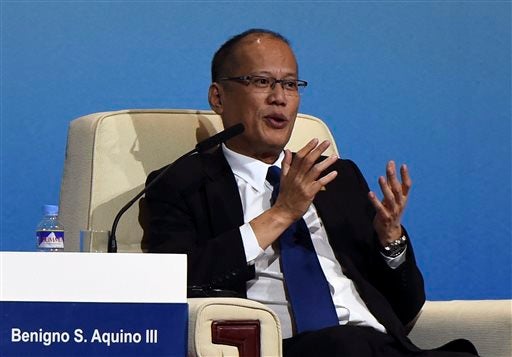 President Aquino speaks as he takes part in a summit dialogue at the Apec CEO Summit at the China National Convention Center in Beijing, China Sunday, Nov. 9, 2014, as part of the Asia-Pacific Economic Cooperation summit. AP PHOTO/WANG ZHAO, POOL

MANILA, Philippines–President Aquino arrived in Beijing on Sunday for the Asia-Pacific Economic Cooperation (Apec) summit where he promised to trumpet what he called the the Philippines’ “positive transformation.”

With the Manila government hosting the same summit next year, the President said the country would “show our readiness to serve as a takeoff point” of Apec member economies “toward a far-reaching and lasting development.”

“Our message to the world is clear: the Philippines has gone far since we took the ‘righteous path’ [good governance program] and indeed, we can still go farther with unity and cooperation,” he said in a speech before departing at Ninoy Aquino International Airport (Naia) Terminal 2.

The President is set to deliver a similar message when he flies to Burma (Myanmar) on Wednesday to attend the Association of Southeast Asian Nations’ (Asean) summit where he would also meet with leaders from Japan, India, China, South Korea, Australia, Russia, New Zealand and the United States.

“At this stage in the positive transformation our country is now enjoying, we’re really taking every opportunity to participate in gatherings like this,” he said.

The Philippines has been the toast of the region with an improved investment climate as shown by improved ratings from Standard & Poor’s, Fitch Ratings and Moody’s Investor Service.

The economy also grew by 7.2 percent last year despite the devastation wrought by Supertyphoon “Yolanda” (international name: Haiyan) in the central Philippines.

Such is the success story the President will share with Apec leaders and potential investors.

“We will personally let them know about the growing investment opportunities in our country. We will encourage them one by one to put up businesses or expand existing ones. This way, we can maintain and further invigorate our economic progress, which, in turn, would lead to more opportunities for our people,” Aquino said.

“Our goal is to create more buzz worldwide about the good news coming from the Philippines and to boost their confidence in our economy.”

Also on his Apec agenda are discussions on how to improve disaster response, improving small, medium and micro enterprises, and promoting good governance, the President said.

In Burma, the President said he would “express our sentiments on the challenges and issues we are facing today, including steps to maintain order in our region.”

Aquino has been pushing for a binding code of conduct to help settle disputes in the South China Sea. Under his proposed Triple Action Plan, claimant countries should avoid activities that could raise tensions in the region and that disputes should be settled through international arbitration.

Aquino said he would express gratitude for the assistance the Philippines received from other countries following a series of calamities last year.

The government allocated around P24 million for Aquino’s trip to China and Burma.

Aquino is set to return home on Nov. 14.–With a report from Maricar B. Brizuela