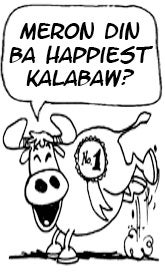 BAGUIO CITY, Philippines—Next year’s “Happiest Pinoy” may receive his award from the happiest king in the world.

Cebuana Lhuillier, a network of pawnshops that is overseeing for the third year the search for the Happiest Pinoy, has invited King Jigme Khesar Namgyel Wangchuck of Bhutan to hand out the awards in June next year.

The Bhutan king has also been asked to give a talk on the concept of “gross national happiness,” according to Jonathan Batangan, general manager of Cebuana Lhuillier Insurance Solutions.

Cebuana Lhuillier says it has launched the nationwide campaign to look for the Happiest Pinoy “to rekindle the values of optimism, resilience and hope” among Filipinos amid the crises facing them.

Bhutan has been described by various organizations as one of the happiest nations in the world, presumably because it has enforced the promotion of its citizens’ well-being as a national policy, Batangan said in a news briefing.

“We invited the king of Bhutan because he is the embodiment of happiness,” he said. “The country is not only focused on economic development in general but also on the personal happiness of its citizens.”

All want to be happy

According to the Bhutan website http://www.gnhbhutan.org/, the so-called gross national happiness program balances material and nonmaterial values in pursuing development.

The program is anchored on the belief that all human beings seek happiness.

Batangan said his group visited the Royal University of Bhutan in September and asked its former vice chancellor, Dasho Pema Thinley, to extend their invitation to the king.

Batangan said the Bhutan government had been sending its students to the Philippines to study agriculture.

In lectures since winning their titles, Happiest Pinoy grand winners Winston Maxino and Rommel Arellano have been promoting the importance of seeking happiness.

The first Happiest Pinoy winner in 2010, Maxino is a corporate executive diagnosed with ankylosing spondylitis, a degenerative and incurable disease.

Arellano, a guidance counselor who was afflicted with polio, won the award in 2012.

Batangan said the search for the Happiest Pinoy was his company’s way of promoting the Filipinos’ positive outlook on life, despite overwhelming obstacles and adversities.

The 2015 Happiest Pinoy will get a P1 million cash prize. The company will also seek the “Happiest Student” and the “Happiest Overseas Filipino Worker,” who will receive special prizes.

Filipinos 18 years old and above and with good moral character can be nominated for the award.

Nomination forms can be downloaded from www.happiest-pinoy.com and are available in any of the more than 1,700 branches of Cebuana Lhuillier nationwide.

Nominations may be submitted until March 31, 2015.–With Inquirer Research