Palace vows to step up efforts vs Ebola virus 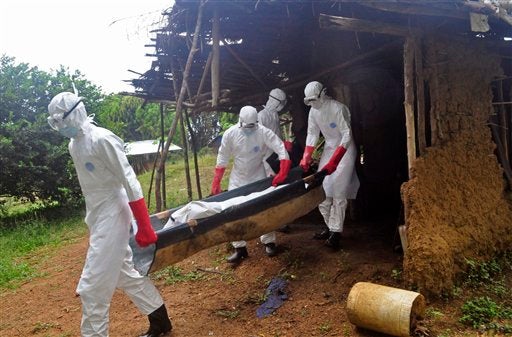 Ebola health care workers carry the body of a middle aged man that they suspected of dying from the Ebola, on the outskirts of Monrovia, Liberia, Saturday, Nov. 8, 2014. AP

MANILA, Philippines — Malacañang vowed on Sunday to step up efforts against the Ebola virus following a Social Weather Stations (SWS) survey showing that nearly half of Filipinos had only partial or little knowledge of the deadly disease, which has killed 4,960 people mostly in West Africa.

Presidential Communication Secretary Herminio Coloma cited the need for “correct and sufficient information” so the public could take the necessary measures and avoid panicking, as governments has been working to prevent the entry of the virus in the Philippines.

Coloma noted that the SWS survey conducted from Sept. 26 to 29 showed that 73 percent of the respondents said they were aware of the disease. But 44 percent of them said their knowledge of the virus was partial or little.

The Department of Health earlier put up an online “Ebola Resource Center” (http://www.healthpromo.doh.gov.ph/ebola/) containing updates on the virus, which has infected a total of 13,268 people, mostly in West Africa, as of Nov. 4.

Most of the cases were recorded in Guinea, Liberia, and Sierra Leone, where authorities have been trying to contain the outbreak.

Filipino peacekeepers arriving from Liberia starting Tuesday (Nov. 11) are set to be quarantined for 21 days on Caballo Island, which is located 4.1 kilometers east of Corregidor.

In his Twitter account, Lt. Col. Harold Cabunoc, the Armed Forces of the Philippines’ public affairs, chief, said on Sunday a screening procedure was required “by the UN mission in Liberia before repatriating the peacekeepers back to their home country.”

Cabunoc said 108 Filipino soldiers passed the screening test in Liberia last Nov. 8. So did 29 policemen and a jail officer. Still, he said the peacekeepers would go through the quarantine procedure starting Nov. 11.

“The President and the government decided on this quarantine to remove even the slightest possibility” that the Ebola virus would reach the Philipines, Coloma said over Radyo ng Bayan.

“The 21-day quarantine procedure is the acceptable standard in the international health community.”

Nothing to fear about Filipino peacekeepers from Liberia